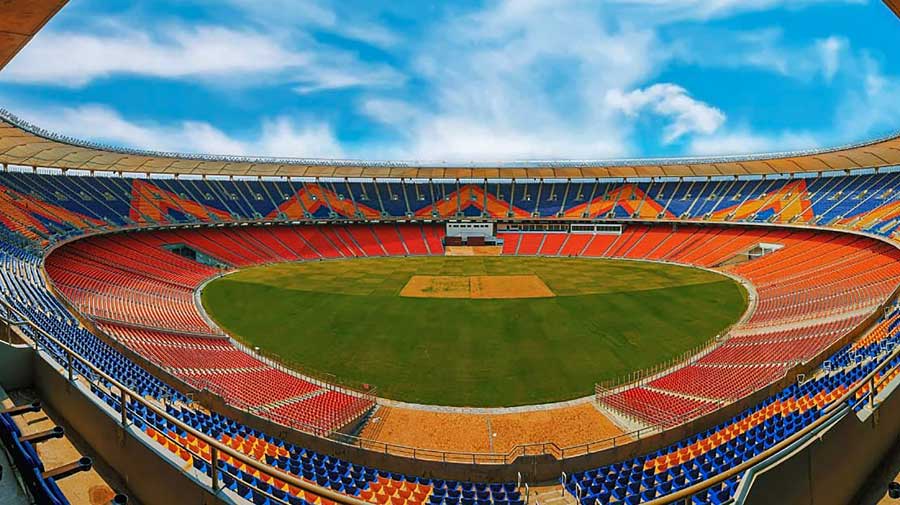 On December 10, 2020, the Board of Control for Cricket in India’s media release announced the itinerary of England’s tour to India which featured a total of 12 matches. Seven were to be held in “the newly built Sardar Patel Motera Stadium in Ahmedabad.” On March 7, the Indian Premier League fixtures said that the “World’s Largest Cricket Stadium — Narendra Modi Stadium in Ahmedabad” would host eight league matches, three play-offs and the final. That’s a total of 12 games, more than any other venue — just in case anyone doubted the location of the new headquarters of Indian cricket.

Given that India will be hosting the 2023 ICC World Cup, where else could its finals be held but in Ahmedabad? Perhaps even the semi-finals. That’s not a snide dig but an informed punt.

That power in Indian cricket rests today with the BCCI secretary, Jay Shah, the son of the home minister, Amit Shah, is not a new phenomenon. Both Jagmohan Dalmiya and N. Srinivasan occupied that post en route to their colourful presidencies.

Yet, never before in the BCCI’s past has the expression of that power become both political and parochial. Parochial in how the biggest games on the Indian cricket calendar are being corralled into a single venue in Ahmedabad. In the past, the lollipops were evenly distributed with the biggest kid getting the largest. Today, that kid owns the entire box. The expression of power becomes political because Indian cricket is being marinated in the ideology of the ruling regime, in this case, the Bharatiya Janata Party.

In the past, when engaged with cricket, politicians left their ideologies at the door in clubby, cross-party agreement. The presence of politicians in the BCCI is a decades-old phenomenon, its lengthy list spanning across a range of dispensations: N.K.P. Salve, Madhavrao Scindia, Manohar Joshi, Sharad Pawar, Arun Jaitley, even Anurag Thakur. Before their ascension to national office, both Modi and Amit Shah were presidents of the Gujarat Cricket Association. The politicians worked alongside businessmen, lawyers and a myriad cricket administrators and stayed away from the day-to-day cricket business.

They were in it for various reasons. Because cricket’s public platform magnified their identity beyond the political stage. Because they loved the power of office and wanted to own another fiefdom. Because they may have even loved the game as kids. Each of those, some of those, or all of those.

To career cricketer administrators, the presence of politicians in the mix became movers, shakers, and red-tape cutters. The politicians in the Board protected the interests of the Board; as a united front to nix the sports development code, which sought greater transparency and accountability in sports administration. Or get land at subsidized prices to build infrastructure. Or hurdle over messy diplomatic tripwires and host three World Cups across South Asia.

But the presence of politicians didn’t involve transferring or transmitting their political ideologies through Indian cricket. The divergent party lines conformed to a larger cricketing role as protectors of the BCCI’s rich, insular turf. The turf may have always been ready for a takeover, but with Indian cricket owning the game’s riches and the public mindspace, the time is ripest now.

Cricket is merely one of the many engines in the BJP’s dream of cultural expansion. Everyone on the BCCI payroll — players, former and current, officials, broadcasters — seems to have fallen in with the party line and has been herded under the umbrella of uncheerful nationalism.

Today, it must be noted that the post of president in the GCA lies vacant; the highest ranked official is Vice-President Dhanraj Nathwani. To be the GCA president means standing in the boots worn by Modi and Amit Shah, an act so subversive that it is not to be contemplated. The new head of the BCCI’s anti-corruption unit is a former Gujarat DCP, Shabir H.S. Khandwawala, appointed sans due application process or interviews. He is 70, outside the maximum age limit for BCCI office-bearers, stated in the new but obviously malleable BCCI constitution.

Indian cricket today is playing second fiddle to the political ideology in power because none of its faithful will speak for it. The messy exchange between Wasim Jaffer, the most prolific batsman in Indian domestic cricket, and the Cricket Association of Uttarakhand was ignored by top BCCI officials: Jaffer’s former teammate and president, Sourav Ganguly, the secretary, Jay Shah, and the treasurer, Arun Dhumal (the brother of Anurag Thakur). In the past, BCCI presidents, regardless of their political beliefs, brought rogue state officials to task to demonstrate their control.

In order to push the Lodha reforms into mothballed irrelevance, the BCCI’s cross-party grandees first edged out its professional management. What they now have is the ruling regime’s iron fist. Jay Shah, a semi-conductor of his father’s authority, has become Indian cricket’s front-line commander over and above the player-president, Ganguly. Checkmate.

The president of India travelled to Ahmedabad to inaugurate a stadium named after his constitutional subordinate, the incumbent prime minister. Seats in the lower tier most visible on television are coloured orange, the BJP’s party colour. During its day-night Test debut, the orange wall made the sighting of the pink ball difficult in natural light for fielders, but who cares.

It must be mentioned here that the only stadium bigger in the world than the Narendra Modi Stadium is the Rungrado 1st of May Stadium in Pyongyang, North Korea. It’s enough to kill irony with a sniggering fit.