Pieces in a poll puzzle

Will there be an advantage for any party when Lok Sabha and assembly elections are held together? 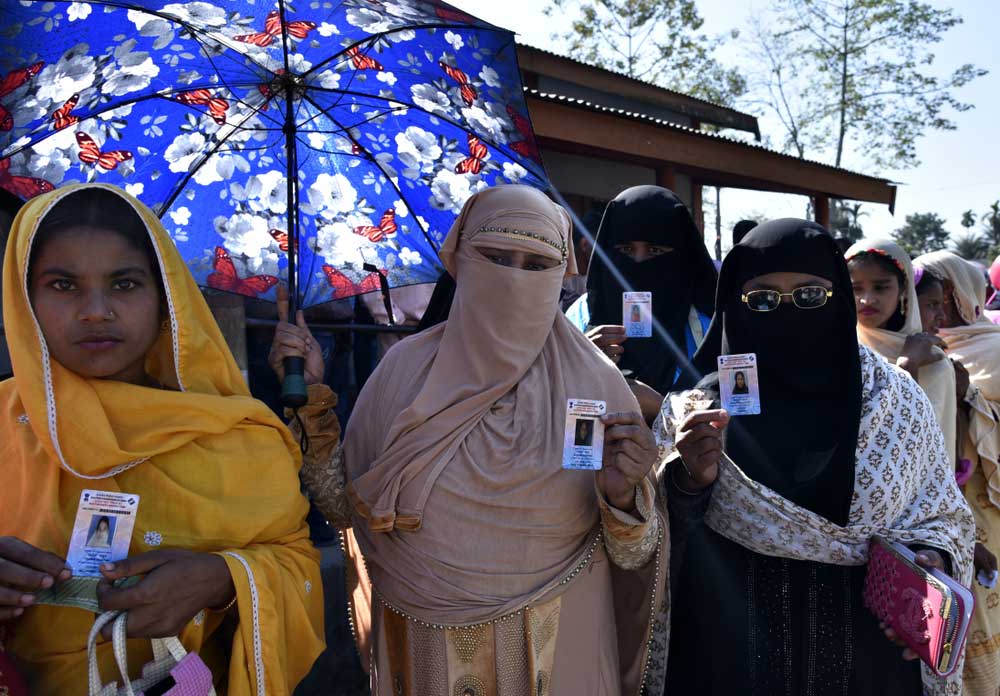 Women voters show their voter ID cards while standing in a queue at a polling station during the 2nd phase of the panchayat elections in Barpeta, Assam on December 9, 2018.
AP
Atanu Biswas & Abhinandan Sinha   |   Published 25.12.18, 05:19 AM

There are frequent deliberations on the possibility of holding simultaneous elections to the Lok Sabha and state assemblies. There is a perception that voters tend to cast their votes in favour of the same party if these elections are simultaneous. It would thus be interesting to see whether there is an advantage for any particular political party when polls to the Lok Sabha and state assemblies are held together.

A study by the research institute, IDFC, found that the same political party won 77 per cent of 2,600 constituencies in in the Lok Sabha and Vidhan Sabha between 1999-2014. However, the figure, 77 per cent, does not say anything about the proportional voting for the party in these elections. The proportion of voters choosing the same party can be estimated by conducting a properly-designed survey.

The association between the percentages of votes for any party or group of parties for the Lok Sabha and assembly elections in a state can be established by using a popular statistical measure known as the ‘correlation coefficient’. A high positive fraction would indicate that more people prefer the same party. For the three political forces — the Bharatiya Janata Party, the Congress and ‘Others’ (several parties constitute this group) — the correlation coefficient decreases as the time gap between two elections increases. These values are the highest for simultaneous elections, indicating a higher proportion of voters sticking to the same party. If one were to consider polls barring a few from the Northeast in the last two decades, the correlation coefficients of voting percentages are 0.96, 0.95 and 0.95 for the BJP, the Congress and ‘Others’, respectively. The figures indicate that the three competitors are almost equally successful in retaining their support bases when elections take place in the same calendar year.

But when elections take place in successive calender years instead, the correlation coefficients become 0.90, 0.84 and 0.84 for the BJP, the Congress and Others, respectively. The BJP is doing the best among the three rivals if the two elections are held one year apart. However, when Lok Sabha and assembly elections are held two years apart, the correlation coefficients are 0.80, 0.81 and 0.76 for the three forces, respectively. ‘Others’ are doing the worst among the political forces when the two elections are held relatively apart. The Congress may prefer such an option the most.

The study apparently failed to exhibit any specific prejudice in favour of a particular party when elections are held in the same year. Yet, this would seem to be the best choice for ‘Others’, as these parties as a whole fail to retain their support base as well as the BJP or the Congress does when the time gap between the polls widens. But since a number of political parties make up ‘Others’, simultaneous elections might be advantageous for some parties while adversely affecting the rest. Sufficient data do not exist to judge their performances separately.

Again, the correlation coefficient cannot tell whether the polling pattern in Lok Sabha election influences the outcomes in the assembly elections or the other way round or, for that matter, whether the influence is mutual. It only assesses the linear association for voting patterns between two elections. The assessment of simultaneous elections with the help of a set of different criteria and data may yield a different picture.

However, if the time lag between Lok Sabha and assembly polls is critical, will the Maharashtra Vidan Sabha polls, which usually coincide with the Lok Sabha elections, have a greater influence on the parliamentary seats of that state than, say, in Tamil Nadu where assembly elections take place almost mid-way between two Lok Sabha elections? This might also be a serious democratic concern.