PayCM campaign stings BJP, Cong leaders clueless on the brain behind it 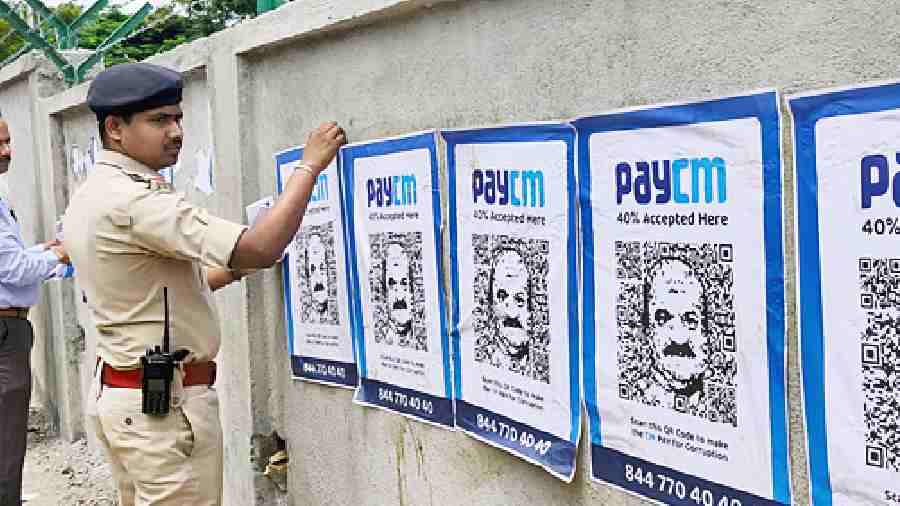 PayCM: Ingenious campaign that stung the BJP government where it hurts
The Telegraph
The Editorial Board   |   Published 25.09.22, 04:41 AM

Many Congress insiders in Karnataka are scratching their heads over who conceived the Grand Old Party’s ‘PayCM’ campaign, which called out the rampant corruption plaguing the Bharatiya Janata Party government in the state. ‘PayCM’ — a play on the popular payment app, PayTM — posters with the face of the chief minister of Karnataka, Basavaraj Bommai, and a QR code appeared in many parts of Bangalore recently, highlighting the allegations of corruption against his government. The BJP tried to counter this with a lacklustre campaign against Congress leaders, such as PC Siddaramaiah and DK Shivakumar. But Congress leaders themselves have have no idea who is behind the ingenious campaign that stung the BJP government where it hurts. Some people are of the opinion that the idea came from young Congress workers who work closely with the state leaders.

Cutting a ribbon is a usual ritual at inaugurations. But there were two ribbons when the Bihar CM, Nitish Kumar, went to inaugurate a 272-bed mental hospital at Koilwar. One was for him, while another was for the deputy CM, Tejashwi Yadav, who is in charge of the health portfolio of the newly-formed Mahagathbandhan government. This is something that has not happened in the recent history of the state. Furthermore, the ribbon that Tejashwi was to cut was placed higher than the one for Nitish.

Although Nitish and Tejashwi both acquiesced, it started murmurs across the political spectrum. Some saw the move as a deliberate design to place the two leaders on the same pedestal, while others viewed it as an attempt to overshadow Nitish. Others still called it a show of sycophancy by the bureaucrats.

The matter would have died down but for a speech by the senior Rashtriya Janata Dal leader, Shivanand Tiwari, at his party’s state council meeting. He reminded everyone about how Nitish used to talk about renouncing everything and setting up an ashram (monastery) in the Himalayas to train politicians. Tiwari took the opportunity to urge Nitish to do so. “Why do they have to rub in that we are the smaller party in the coalition? It is the same mistake that the BJP made,” a leader from the Janata Dal (United) said in frustration. Some storms brew silently.

The Congress, which is in the Opposition in Uttarakhand, has allegedly exposed illegal appointments to the Vidhan Sabha secretariats in Dehradun and Gairsain. Karan Mahara, the state Congress committee president, had alleged that the former Speaker of the BJP government, Prem Chand Aggarwal, had secretly appointed relatives and friends of the present ministers and other leaders of the saffron party. Mahara’s allegations would have died down had Ritu Khanduri Bhushan, the current Speaker, ignored the whistle-blower. Instead, she laid bare the past irregularities of her own party and cancelled 228 such appointments. However, whether Bhushan will be able to expose those BJP leaders who pushed for the appointments to begin with is a million dollar question.

The Odisha CM, Naveen Patnaik, has won accolades from industrialists across the country because of his humility. Patnaik, who recently went to Mumbai to attend a curtain raiser event for the upcoming Make in Odisha Conclave, met several leading industrialists of the country individually and invited them to explore the vast opportunities available in Odisha. He informed them that Odisha is emerging as the top investment destination of the country. He pressed his point in such a polite manner that he won the confidence of industrialists.

After the meeting, Anand Mahindra, the chairman of the Mahindra Group, profusely praised Patnaik and tweeted, “There’s only one way to describe CM @Naveen_ Odisha — A Class Act. Cerebral, calm, confident, he’s a man of few words who lets his actions do the talking. One of his greatest legacies will be a model for mitigating natural disasters that is being emulated around the world…”

The BJP’s decision to rehabilitate the former Tirpura CM, Biplab Deb, is a message for party leaders holding coveted posts as well as those who want to get to the top: follow the party line unquestioningly for a bright future. Deb, who was suddenly removed from the CM’s post in May, has been elected to the Rajya Sabha and has been appointed the Haryana party in-charge.

Deb is the second CM from the Northeast to have been rehabilitated by the party. The former Assam CM, Sarbananda Sonowal, was made a Union cabinet minister last year, two months after losing the coveted post. Sonowal has been included in the BJP’s parliamentary board as well as in the central election committee. A common link connects Deb and Sonowal. They both handled their exit from the CM’s post gracefully, making the change of guard smooth in their respective states. It certainly pays to be silent in the BJP.

The Congress leader, Shashi Tharoor, has considerable appeal among his party workers as well as the general public. His decision to contest for the Congress president’s post has been welcomed widely. However, it seems that the party unit in his home state, Kerala, would prefer a candidate who enjoys the trust of the Gandhi family. Earlier, Kerala Congress leaders had allegedly tried to spoil Tharoor’s chances for a ticket and then expressed displeasure when he supported the Left government on controversial development projects.