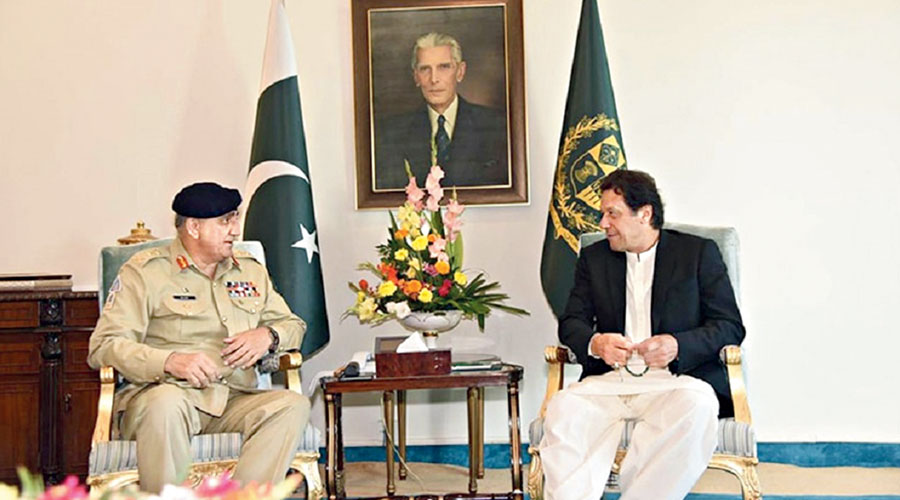 Last week, Prime Minister Imran Khan released what he termed as Pakistan’s first comprehensive “National Security Policy”. A part of the document is unclassified and intended for public discussion and has been released as a self-contained enunciation of that policy.

Pakistan’s past struggles with national security — both on the ground and at the doctrinal level — are well-known. It had appeared in end 2014, momentarily, that Pakistan had reached a turning point on this issue. On December 16, 2014, not a propitious date in Pakistan’s political calendar on account of the surrender in Dacca in 1971 on that very day, over a hundred children were killed in a terrorist attack on a school in Peshawar. The outrage that followed this massacre was global and was particularly visible in India. Both Houses of Parliament had, amidst widespread public empathy, passed resolutions of sorrow, condolence and condemnation. In Pakistan itself, the terrorist attack brought its fractious polity and military together. The outcome of this was a ‘National Action Plan’ to combat terrorism. This was intended as a comprehensive strategy to address the internal and external aspects of terrorism that the country confronted. The cross-party and civil-military consensus that underwrote the adoption of the plan suggested that a new approach could emerge. Many did feel that the gravity of the threat Pakistan faced would lead to a new approach about the connection between Pakistan’s strategic priorities vis-à-vis India and Afghanistan. The expectation was that henceforth Pakistan would take a more rounded and comprehensive approach towards its national security and its actions would, therefore, extend beyond the kinetic operations against the Tehrik-i-Taliban Pakistan in the tribal areas.

However, it was not to be. The civil-military consensus was fragile and could not withstand the other pressures on it by the feuding between Prime Minister Nawaz Sharif and the army. Political divisions soon re-emerged and also took their toll on the NAP. The wave of sympathy that had swept India evaporated as quickly when within days of the Peshawar attack a major mastermind of the Mumbai terror attack of November 26, 2008 was given bail and was to be released soon. It became clear that even if the Peshawar school attack was a turning point in the history of Pakistan, its establishment was in no hurry to turn. Yet the 2014 NAP remained significant because it had emerged from a cross-party and civil-military consensus, however fleeting that turned out to be.

The recently released NSP is, clearly, the outcome of a different kind of approach and is, thus, a different kind of document. It resembles almost an academic or think tank output rather than a purposeful government statement of intent and policy. It is self-confessedly aspirational but to such an extent that even a less-biased observer would see it principally as a concentration of platitudes and statements of good intent. Indeed, it could be argued that its major weakness is that it has not emerged through inter-party dialogue or through Parliament. Given Pakistan’s divided polity today, that makes it more likely to be dismissed as fluff or, at best, as a reiteration of existing positions.

The NSP aims at being comprehensive by looking at security in a holistic and citizen-specific sense, comprising such different dimensions as economy and development, environment, the social fabric and so on apart from the traditional domains of defence, military and strategic issues. In a context specific to Pakistan, this can be seen as a step forward. Long periods of direct military or a hybrid military-civil governance have meant that a somewhat peculiar notion of national interest has developed in Pakistan: national interest is seen as national security alone rather than as a conglomeration of economic, social, political, human and security interests. This narrow view of national interest implies that no price — in terms of economic, social or human costs — is too high to pay to achieve a particular security or strategic interest. This excessive securitization of notions of national interest means that Pakistan has paid a high price over the years for its strategic misadventures. The results are evident in the current state of its economy and fragile internal security.

It could, therefore, be argued that by seeing national interest in the wider terms of citizens and human welfare, social harmony and economic development, the new NSP is a step forward in advancing a less-securitized discourse in Pakistan. The NSP thus claims that it places “economic security at the core” of comprehensive national security and balances traditional geostrategic approaches with geoeconomics ones. But conversely this may be seen as too little a movement forward given the intensity of the discourse around strategic and security issues in Pakistan. There is little in it to give even a hint of the difficulties of the choices Pakistan faces if it seeks to strike a minimum balance between its soaring geopolitical ambitions and rhetoric on the one hand and its real needs and capacities on the other. There will inevitably be interest in the specifics of what the NSP says. There is unfortunately very little. On India and Jammu and Kashmir, there is largely a restatement of standard Pakistani positions. There is a reiteration of its traditional stance that while it desires good relations with India and resolving all outstanding issues through dialogue, Indian actions pose significant hurdles.

The general conclusion that is inescapable from reading the NSP is that there continues to be a lack of serious thinking in Pakistan on the enormous challenges it faces. The corollary to this is also self-evident. As always in the past, if there are to be any moves to break the current bilateral stalemate, the initiative will have to come from India.

T.C.A. Raghavan is a former Indian High Commissioner to Pakistan