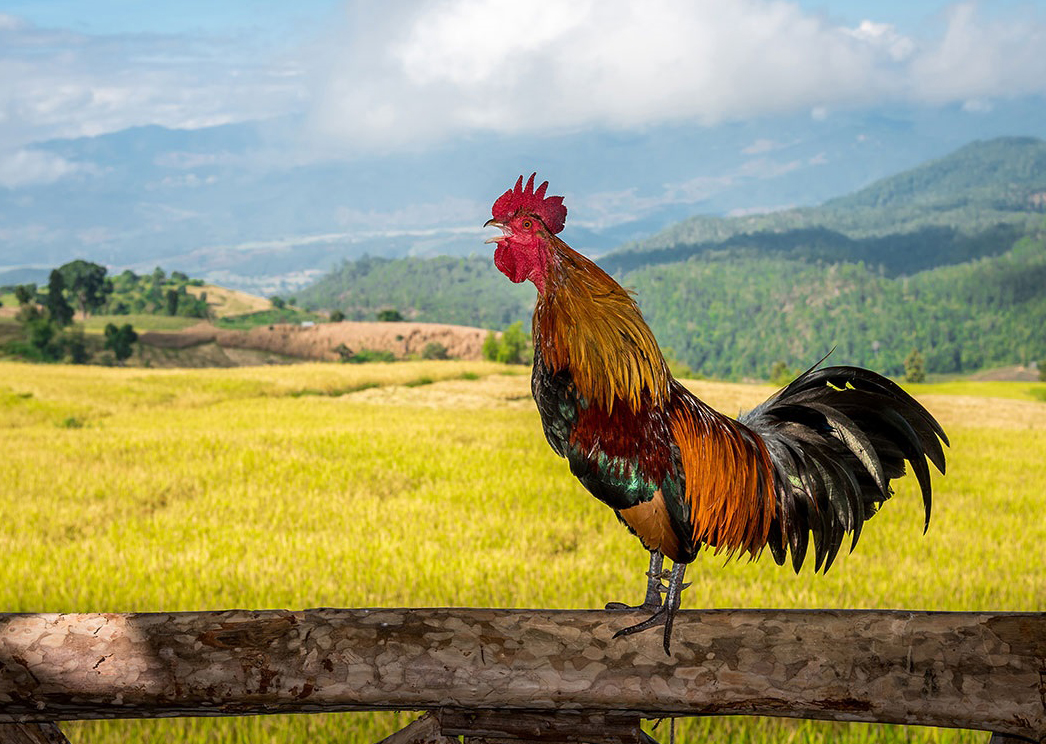 Two years ago, the owner of a rooster was hauled to court by vacationers who found the bird's noise intolerable. Elsewhere, a visitor asked the mayor of a village to stop the merry chiming of church bells, and a pond owner faced legal troubles over the frenzied croaking of amorous frogs
(PxHere)
Uddalak Mukherjee   |   Published 26.06.19, 03:16 AM

René Goscinny, the witty comic book writer who created Asterix along with the illustrator, Albert Uderzo, was wrong. The Gauls are not crazy; but visitors to Gaul can be loony. Maurice, a cockerel, was a victim of this lunacy. Two years ago, Maurice’s owner was hauled to court by vacationers in Saint-Pierre-d’Oléron who found the noisy rooster intolerable. By 2018, the madness had spread to Lozère, where the mayor of a village was informed — curtly — by a visitor to stop the merry chiming of church bells. Earlier, in Dordogne, the frenzied croaking of amorous frogs had given a legal headache to the owner of a pond that was the site of the amphibian sexcapade.

The Gauls, evidently, have had enough of the sky falling on their heads periodically. This year, the mayor of tiny Gajac, Bruno Dionis du Séjour, wrote a letter to French politicians, demanding that parliamentarians must add rural sounds — the mooing of cows, the braying of donkeys, the crowing of cockerels — to the list of French intangible cultural heritage. In du Séjour’s opinion, only legal protection can ensure the longevity of sounds that are ‘integral to the rhythm of the countryside’.

Du Séjour may or may not be aware that the Inventaire du patrimoine culturel immatériel en France has an international cousin: Unesco’s Representative List of the Intangible Cultural Heritage of Humanity. A committee apparently gets together every year to assess the nominations presented by the State Parties to the 2003 Convention. Some of the exotic, but endangered, entries that have been included by the committee over the years include the Enkipaata, Eunoto and Olng’esherr (three separate rites of passage for Maasai men), Bobbin lace-making from Slovenia, Jamaican reggae, the medicinal bath — Lum — of Tibetans living in China, Konjic woodcarving of Bosnia and Herzegovina, Turkey’s whistled language, the llano songs from Colombia and Venezuela and so on. Thirteen Indian entries are a part of this dizzyingly fascinating list. The Sangeet Natak Akademi has the responsibility of preparing dossiers concerning nominations to Unesco. Among the Indian entries in the Unesco list are Ramlila; the Sanskrit theatre, Kutiyattam; Kerala’s Mudiyettu — a form of ritualistic theatre-dance drama — the art of making brass and copper utensils among the Thatheras of Punjab; Chhau and, inexplicably, the Kumbh Mela. The mela’s inclusion took place three years into Narendra Modi’s reign.

What is noticeable in the Unesco’s representation of intangible cultural wealth is the preponderance of community rituals, music, scientific experiments, performance arts and craft, even culinary traditions. But there are very few sounds of the kind that du Séjour wants to protect, sounds that constitute the heart of a landscape.

The collective apathy towards the aural dimension of heritage merits a closer examination. It could be that the marginalization of some kinds of sound organic to natural settings has something to do with the human propensity to imagine heritage as tangible. Is that the reason why ancient, urban edifices, for instance, are allotted a greater share of resources and public attention than, say, the sounds that are being silenced, legally or otherwise, in rural areas?

Human oversight is not the only contagion that is turning sound into silence. The veneration — some would hasten to add fetishization — of silence in theology, philosophy and culture is a formidable adversary in this context. Religious sites — the Bahá’í Houses of Worship, for example — demand stillness from the flock. The brightest of minds, too, have cherished quietude. One obvious reason for the deification of silence is that tranquillity is believed to be the metaphorical crutch without which a seeker can never hope to reach the truth. Little wonder then that the Mahatma, that matchless votary of truth now forsaken by India, was drawn to the vow of silence. M.K. Gandhi had described his visit to a Trappist monastery in Natal in 1895 in, among other publications, The Vegetarian and Young India. In the latter, reminiscing about the trip 30 years later, Gandhi wrote, “Most of the inmates of that place were under a vow of silence. I inquired of the Father the motive of it and he said the motive is apparent: ‘... If we want to listen to the still small Voice that is always speaking within us, it will not be heard if we continually speak.’ I understood that precious lesson. I know the secret of silence.”

But sounds, too, can lead an inquisitive mind to truth. Literature has shown how. In Kolkatar Phiriwalar Daak aar Rastar Awaj, Radhaprasad Gupta, an inveterate miner of quirky sounds of the city, argued that “The Cries of London”, published in The Tatler in 1711, was an essential guide to understanding that heaving, breathing metropolis of the eighteenth century. Incidentally, Gupta’s work, an illuminating register of not just the cries of peddlers and hawkers but also ephemeral sounds — the reverberation of the nearly extinct door knocker, announcing a visitor — takes forward an indigenous literary tradition. Gupta acknowledges his debt to his ‘creditors’, Amritalal Basu and Shoshichandra Dutta, in his book.

Basu’s Puratan Panjika reinforces the relationship between sound and city by eavesdropping, intently, on an aural universe within which played out that city’s social and domestic rituals, its prejudices and pride. The firing of the canon from the fort thrice a day, the melody of clocks from affluent households, the giggles and snatches of conversations of old women headed for ‘ganga snaan’, the restrained tune of military bands, the call of the ‘ghotitola’ — the retriever of knick-knacks from wells — at dawn as well as the evening cries of those who hawked matches, sweetmeats, curd, honey, vermilion, flowers, traditional medicines — on joining each acoustic dot, bit by bit, emerges the essence of the days and nights of that other, now lost, Calcutta.

Yet, the intangible — mundane, not melodious, soundscapes — remains peripheral to the imagining and, most disappointingly, conservation of topographies, making the scrutiny of such spaces unrepresentative. Worryingly, even as the experience of modern living deteriorates into a cacophony of noise, the public discourse, unable to differentiate between sound and din, is retaliating by demonizing the former.

Was Monsieur Maurice, the French rooster, crowing in protest?

Sound pollution is emblematic of a rot in the moral fibre