Sinha, who is undecided about contesting the Patna seat on a Congress, RJD or independent ticket, has not binned the idea 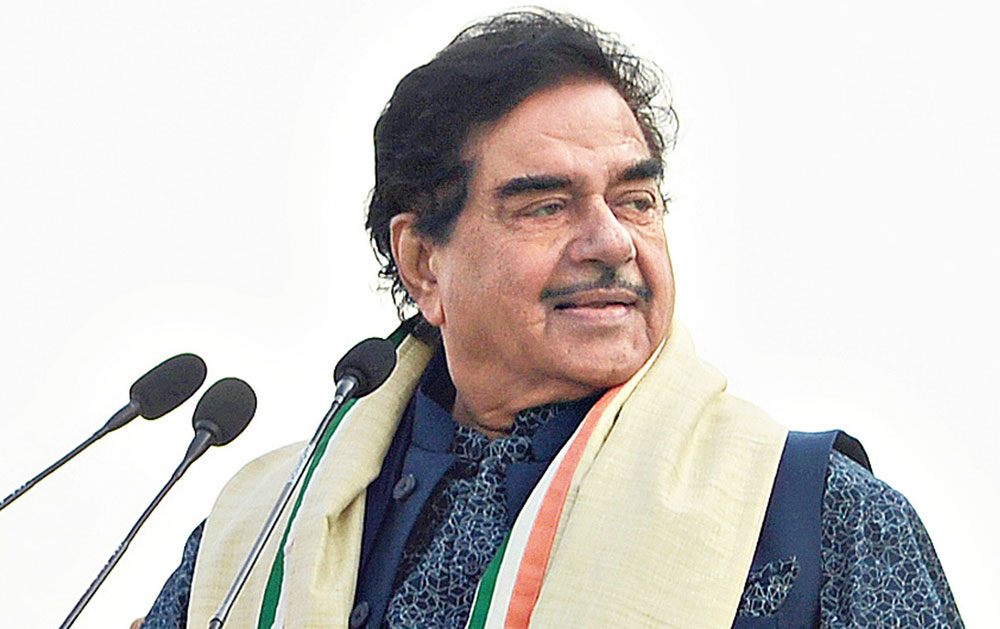 If Shatrughan Sinha does contest the Varanasi seat, the city will draw international attention as he has the charisma highlight Modi’s failure to transform this ancient city into a modern Kyoto-like centre
Telegraph picture/ Pradip Sanyal
The Telegraph   |   Published 27.01.19, 09:51 AM

At least three senior BJP leaders, including the party chief, Amit Shah, had to be admitted in different hospitals after the completion of the party’s national council meeting in Delhi. Many in the BJP saw it as a bad omen ahead of the general elections. However, the law minister, Ravi Shankar Prasad, claimed the hospital visit proved to be good for him. He said the biting cold winds in Delhi’s Ramlila ground had struck him and there was nothing else for him to worry about. The AIIMS visit, he said, came as an opportunity to get vital tests done. “I must tell you that my heart is still young,” Prasad told reporters with his trademark laughter. “My kidney and other organs are also fine,” he added. Now that should come as a relief to a party in which some veterans have been fighting poor health.

There’s a lot in a name

The Nehru-Gandhi family evokes disgruntlement and fear in the saffron family. Thus, fear was writ large on the faces of BJP leaders on the day the Congress took everyone by surprise and announced the entry of Priyanka Gandhi in politics. Saffron party leaders got angry every time journalists asked them for their response to the Priyanka Gandhi issue. “Say Priyanka Vadra, not Gandhi. She is Robert Vadra’s wife,” they said sternly. Senior leaders, too, seldom used the surname Gandhi while talking about Priyanka’s appointment.

Were they conscious of the legacy that she brings along as well as a persona that friendly journalists on television will find difficult to ignore despite the pressures from the powers that be?

Opposition leaders are churning out new names on a daily basis as a potential joint candidate to take on the prime minister, Narendra Modi, in Varanasi. The Samajwadi Party, the Bahujan Samaj Party and the Congress have almost agreed on having a joint candidate even though a consensus is yet to emerge on the choice of the contestant. Somebody floated the name of Anupriya Patel if her party, Apna Dal, is willing to snap ties with the Bharatiya Janata Party. Others suggested the name of Priyanka Gandhi: this is, however, an unlikely possibility.

There are whispers that the name that the majority of leaders are seriously considering is that of the BJP rebel, Shatrughan Sinha. Although Sinha is said to be keen on contesting the Patna seat that he has been representing so far, Opposition leaders have been persuading him to take Modi head-on in Varanasi. Support of the SP, the BSP and the Congress combined with his rebel status and stardom can help Sinha pose a formidable challenge to the PM. Sinha, who is still undecided about fighting for the Patna seat on a Congress or a Rashtriya Janata Dal ticket or as an independent supported by them, has not binned the idea of taking up the Varanasi challenge. If he indeed becomes a candidate, Varanasi will draw international attention as the ‘Bihari babu’ has the wherewithal and charisma to bring into focus Modi’s failure to transform this ancient city into a modern Kyoto-like centre. So far, Modi has been khamosh on the Opposition’s game plan.

Jyotiraditya Scindia’s ‘meeting’ with Shivraj Singh Chouhan, the former chief minister of MP, set tongues wagging. What added to the excitement was that the two leaders were meeting at a time when Kamal Nath, the CM, was away at Davos. Aware of the speculation, Scindia used his Twitter handle to clear the air. He explained that the meeting was a courtesy call. Apparently, the two had decided to catch up when they had met on the occasion of Nath’s swearing-in. At least some pledges are still honoured in Indian politics.

Priyanka Gandhi’s induction has been followed by a search for a chief for the UP Congress committee. Insiders say that the UPCC may have two heads, one for the east and one for the west of the state. The names of PL Punia, Pramod Tiwari, Sanjay Singh and Jitin Prasada are doing the rounds for the post. All eyes are now on Priyanka who is likely to take a call on the matter.

Too cold for comfort

Ravi Shankar Prasad may not have made much about his health but the Delhi BJP chief, Manoj Tiwari, found his head on the block for organizing the BJP’s national council meeting in the open at Delhi’s Ramlila ground. A number of party leaders — Ram Lal and Prasad were among them — took ill, unable to withstand the cold and the chill. Since then, Tiwari has been on an ‘apology tour’ trying to explain to anyone who is willing to listen that he should have had the wisdom to organize the event indoors.

Tiwari’s supporters feel that it is not fair to single out the Bhojpuri actor because the decision had been vetted at the highest level. Perhaps they are more worried about their boss’s political career being affected by a cold shoulder from the party high command because of the fiasco.

A number of participants at the Vibrant Gujarat summit were seen getting themselves photographed with ‘virtual cut-outs’ of Narendra Modi. Print-out facilities, email and WhatsApp — they came free of cost — were available so that the tech-savvy crowd could take their treasured possession. The summit attracted numerous businessmen, save for Anil Ambani who was ‘unwell’.

Delegates from across the world at the Vibrant Gujarat summit 2019
Image source: @VibrantGujarat on Twitter