Advertisement
Home / Opinion / On the brink of fascism

On the brink of fascism 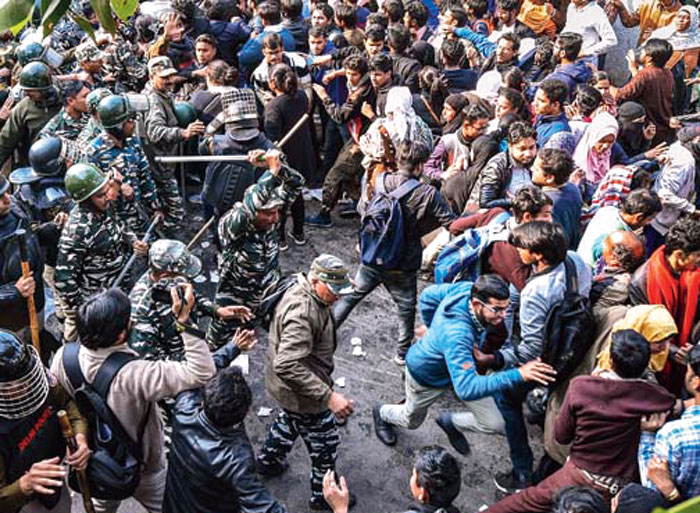 India today is teetering on the brink of a fascist State. Until now we have had fascist elements occupying positions of power in a democratic State, but the tendency to push it in the direction of a fascist State, slow at first, has gathered momentum of late. The systematic use of lies and half-truths to mislead the public; the open calls for shooting down dissenters, all of whom are labelled “traitors”, “anti-nationals” and belonging to the “tukde-tukde gang”; the underlying assumption that “one leader” and “one party” alone represent the true voice of the “nation”; the unconcealed debunking of the Indian Constitution as only a recent and ephemeral document compared to the millennia-old Vedas; and the open attempt to reduce the largest religious minority of the country to the status of second class citizens through the Citizenship (Amendment) Act are all indicative of the ruling regime’s single-minded and uncompromising thrust towards a fascist State.

It will no doubt be asked: all this may entail nudging the country towards a Hindu rashtra; but why call it a fascist State? This distinction, however, betrays a misconception that is propagated by the regime. This holds that the Hindu rashtra will benefit the ‘Hindus’ by giving them a superior position, so that milestones along the path towards it, such as the CAA, should worry only the minority community and should rather be welcomed by the Hindus.

This view is doubly wrong: first, because a Hindu rashtra would not entail an iota of improvement in the material living conditions of the ‘Hindus’, since the Hindutva forces have neither a programme nor even any understanding of what such improvement requires, and second, because a Hindu rashtra, which proclaims the supremacy of an idealized category called the ‘Hindus’, will be as much of a dictatorship imposed upon the empirically-existing Hindus as over anybody else. True, the minority community will be victimized en masse, but then so would everybody else from the majority community who does not fall in line with the regime’s dictates, on the ground that such persons are as traitorous to the Hindu rashtra as the minority community.

The regime’s dictates in turn will be based on unreason, like the entire Hindutva project is. By unreason here I mean that the truth of any proposition according to its proponents is established on the basis of belief rather than of evidence: those who celebrate unreason would say, “I believe something to be true, hence it must be true, no matter what the evidence suggests”. If you disagree with me, since there is no question of settling our dispute by referring to evidence, you must ipso facto be wrong, an upholder of falsehoods, and therefore working to the detriment of the “nation”. The fact that all dissenters, from the non-communal political conservatives to the liberals and the Left, are dubbed “anti-nationals” and “traitors” follows from this basic unreason, which of course is fundamentally anti-democratic.

The practices that would prevail in the Hindu rashtra would obviously follow from the beliefs held by the ‘leader’ and his coterie; these would be enforced by the organs of the State and also vigilante hordes. In addition, the practices that prevail would also be based on beliefs held by the vigilante groups themselves (unless, as may happen in rare cases, they are explicitly repudiated by the leader). The Hindu rashtra, in short, will subject everybody, including those belonging to the majority community whose supremacism is supposed to be its rationale, to the diktats of the leader and his vigilante hordes. This, and its close nexus with certain monopoly houses, is what makes the Hindu rashtra a fascist State.

India’s recent rush towards such a State has been halted only by the courageous resistance put up quite spontaneously by common people: women, marginalized groups, especially those belonging to the religious minority, the working people, students and members of the intelligentsia. This resistance is seeking to uphold the Constitution that embodies the concept of a free, secular, democratic and inclusive nation, which was the vision of the anti-colonial struggle and for which the Father of the Nation had laid down his life.

This resistance is virtually the last line of defence against the onslaught of fascism because all the institutions of the democratic State, which would normally be expected to defend it and upon whose defence the people repose their trust, have caved in with the advance of fascism.

Let alone the media and Parliament, whose vulnerability to being browbeaten is not surprising, even the judiciary has been largely neutralized, as is evident from its acceptance of an argument based on “unreason”, as defined above, in the Babri Masjid case, its procrastinations on the constitutionality of the unilateral abrogation of Article

370 and the sheer lack of urgency it is demonstrating in pronouncing on the legality of the CAA.

This caving in of State institutions in the face of advancing fascism in India has been a surprise. The process of transition from a democratic to a fascist State has traditionally not been an easy one: in Germany, for instance, in spite of coming to power by normal parliamentary means (though only on the support of a minority of votes), the Nazis had to fulfil certain conditions before they could get the army to submit to their rule. In India, by contrast, the process seems to have advanced with relative ease, until being checked by popular resistance.

The ruling regime, aware that this resistance is the last, and the most formidable, line of defence of democracy against the fascist State, is attempting to undermine it by every possible means, from the use of terror to the creation of a communal divide against it. To survive and succeed, the resistance must not only hold out, but must also re-energize pro-democracy elements within the State structure.

There are clear signs of such re-energization. The tendency to surrender that had been visible till recently in several State institutions is being reversed; some actions of the lower judiciary, for instance, including the granting of bail to Chandrasekhar Azad, show a shaking off of the pusillanimity that had been quite pervasive till now.

The resistance has also galvanized state governments. Several of them have actively sided with it, because of which the police in those states have been less severe with the demonstrators. In contrast, the police in the BJP-ruled states (and in Delhi) have had no compunctions about mercilessly suppressing voices of democracy.

While the fascist project is indubitably doomed in the long run, the country’s immediate future certainly hangs in the balance. The slightest tilt in the scale one way or another, such as, for instance, the outcome of the Delhi elections, or a clear verdict by the Supreme Court on the constitutionality of the CAA, will set off a dialectical process leading either to a strengthening or a weakening of the fascist onslaught.

Meanwhile one can only applaud the courage and the commitment of those who have stood up so strongly in defence of democracy. Echoing the Turkish revolutionary poet, Nazim Hikmet, who in 1949 had written from prison, “The Armies of China saved me too”, one can say, “The women of Shaheen Bagh, Park Circus and Ghanta Ghar saved me too.”

All fall but one stands tall: campus