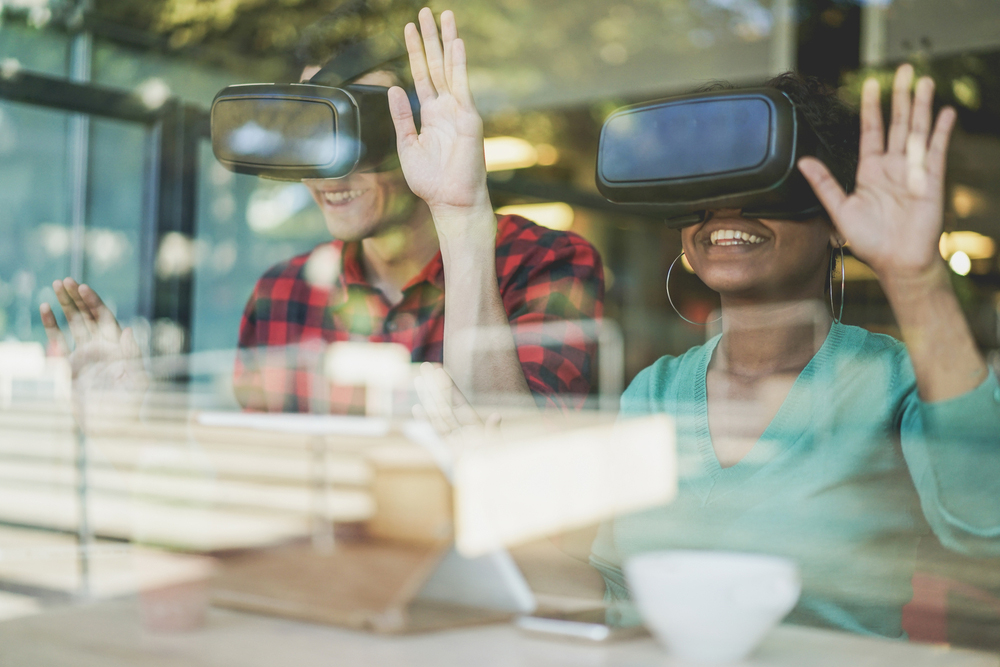 The concept of sensory experiences has been around for a while, such as eating a meal blindfolded. The idea is to heighten one’s sensations during a meal. Now, the next level of eating is powered by virtual reality goggles. The James Beard Foundation’s West Village townhouse will soon be the first place for ‘Aerobanquets RMX’, a virtual reality dining experience that will feature seven bite-sized courses blending food, art and blind eating into a $125-per-person experience. Top Chef’s Gail Simmons will narrate the experience. The ‘event’ is open to the public from October 30.

A Journal of Food Science study in 2018 found that VR environments affect taste. For example, a VR barn makes cheese taste more pungent and a VR park bench makes it taste more herbal. The three people behind the concept come from different walks of life. Chintan Pandya, the acclaimed chef at Adda Indian Canteen in Long Island City, New York, and Roni Mazumdar, its savvy owner, teamed up with Mattia Casalegno, a visual artist from Naples, Italy, who teaches digital arts at Pratt Institute. Pandya and Mazumdar have risen up in New York City’s dining scene in the last year with their hit restaurants, Rahi and Adda. The latter, especially has topped ‘best new restaurant’ lists from Food & Wine and Bon Appétit. “This is an extension of what Ferran Adrià was doing at El Bulli, playing with memory, perception, and taste,” Davis said to Bloomberg. “It’s digital gastronomy.”

While blindfolds are just pieces of cloth that can be easily put on and removed, a VR experience involves expensive equipment, maintenance and hours of training for staff.

'Joker' has created a media frenzy about its potential to inspire real-life mass shootings, rendering it controversial
(Image from the film's poster)

The New York Comic Con kicked off at the Javits Center in the West Side last week. It is an annual NYC fan convention dedicated to Western comics, graphic novels, anime, manga, video games, cosplay, toys, movies and television. It was first held in 2006. The day is full of action figures, promotions, super-hero apparel and, of course, hundreds of artists trying to sell their work.

The artists were spread across the main convention floor while the upper level included art vendors and galleries, offering everything from vintage comic illustrations, collectible comic books, all manner of poster art, and even officially licensed artworks depicting beloved franchises like Star Wars and the Marvel and DC universes. At almost every corner were attendees dressed in Joker garb, what with the convention coming close on the heels of the release of Joker. The Joker himself, a rendition of the comic book character, is played by Joaquin Phoenix. The movie has created a media frenzy about its potential to inspire real life mass shootings, rendering it controversial.

Cosplaying is not only a fashion statement, but also an opportunity for people to really bring their favourite characters to life. This year’s comic con also celebrated diversity. There were three panels — “Cosplay and Disabilities: Incorporating Diversity and Accessibility into Costumes”, “Muslim Fandom: Geeks, Nerds, Cosplayers, and Creators” and “Cosplay While Plus Ultra” — each recognizing cosplayers who are differently abled, differently sized, and from varied racial backgrounds.

Fall just kicked off officially: temperatures are slowly starting to dip, leaves are changing colour and people’s favourite part of the season — pumpkin spice — is back. Pumpkin spice, as we know it today, is actually a blend of ginger, nutmeg, cinnamon and allspice, created in 1934 by McCormick & Company, who introduced the blend as an alternative for consumers who were buying all four spices to make pumpkin pie.

This year, Starbucks introduced its Pumpkin Spice Latte for the season on August 27 — the earliest introduction date ever for the fan favourite fall beverage that launched in 2003. Now, the pumpkin spice flavour has spread beyond coffee to cereal, beer and even spam. Last year, Forbes valued the entire pumpkin-spice industry to be worth an estimated $608 million.

Musicians and activists joined hands on September 28 in Central Park for an event aimed at ending global poverty by 2030. This was the Global Citizen Festival, bringing in over 60,000 attendees. Queen + Adam Lambert, Alicia Keys, Pharell Williams and OneRepublic took the stage during the five-hour festival, which came right after the global climate strike led by the Swedish teen activist, Greta Thunberg, and the United Nations Climate Summit.

The event was to call on governments to raise $250 million for the Education Cannot Wait fund’s 2019 replenishment, to ensure children can get education even in times of crisis; make commitments to the Global Fund’s $14-billion fundraising drive to save 16 million lives and cut deaths from AIDS, tuberculosis and malaria down by half by 2023; and allocate $350 million to the UN Population Fund to provide family planning and critical health services to the world’s poorest women.

The Global Citizen initiative will wrap up with Global Go Live: The Possible Dream, a 10-hour concert slated to be held in September 2020 across five continents. The show will be broadcast live from NYC, Lagos and other cities in Europe, Asia and Latin America. It will call on businesses and world leaders to commit to raising money to help prevent plastic pollution, empower women, fight infectious diseases, and provide a quality education to future leaders.

The department chain, Macy’s, received severe criticism after it introduced portion-control dinner plates with jeans size designations. The smallest circle showed how much to eat to fit into “skinny jeans”, with the largest circle equalling “mom jeans”. Macy’s pulled the item from its NYC store after a backlash on social media. The company that manufactures the plates is called Pourtions. The website says its products are “a humorous + healthy way to watch what you eat + drink”.