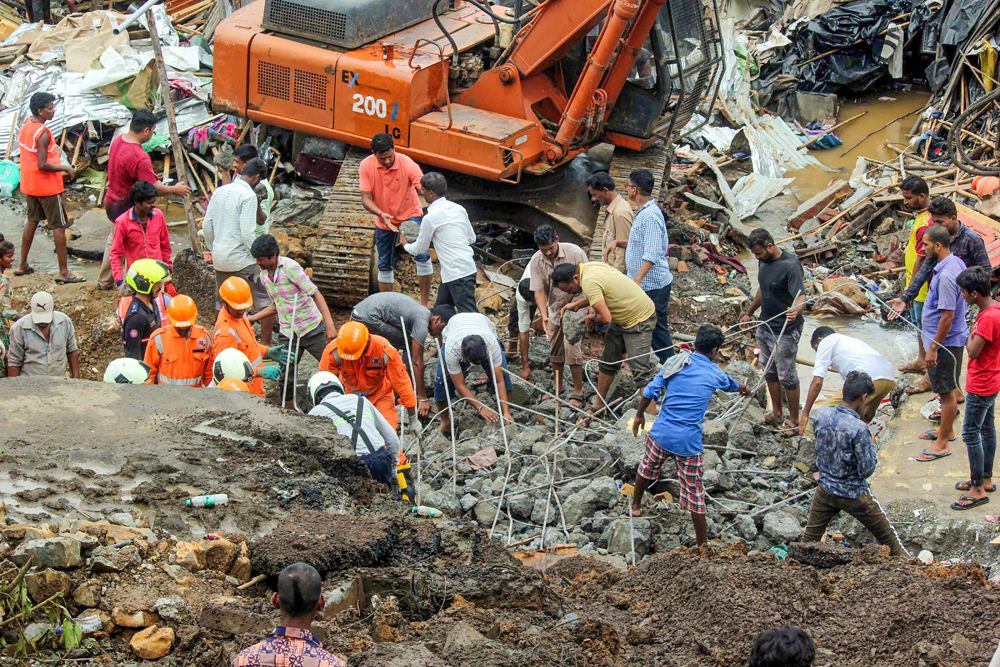 NDRF and fire brigade personnel look through debris after a portion of a compound wall collapsed on shanties adjacent to it at Malad East in Mumbai on Wednesday
PTI photo
The Editorial Board   |     |   Published 05.07.19, 04:23 AM

Mumbai is often described as the city that never sleeps. One of the primary causes for the sleeplessness of India’s financial capital could be the monsoon that has now besieged the city. Each year, the rains bring in their wake mishaps and misery to Mumbai and other parts of Maharashtra. The casualty count, predictably, has been climbing this year too. A wall collapsed in Malad on account of a torrential downpour: the city had received over 30 cm of rain in 24 hours. Eighteen people perished in the accident. Twenty-three people died when rains breached a dam in Ratnagiri; Pune, too, has contributed to the death toll. It has never been easy for those who live to tell their tales of woe either. Various parts of Mumbai remain under water after the first burst of monsoon showers. The suburban train services — the lifeline of the metropolis — are crippled, inconveniencing thousands of commuters. The cycle of deluge, death and destruction seems to have become an annual — discomfiting — ritual in Mumbai’s calendar.

A small part of the blame lies with nature. Mumbai happens to be one of the wettest cities in the country. But the lion’s share of the problem can be attributed to the callousness of the political class. Mumbai’s creaking urban infrastructure and the wretched state of administrative preparedness repeatedly expose the culpability of politicians of all hues. What makes the inertia all the more glaring is that 14 years ago, after Mumbai had nearly drowned in a calamitous flood, ambitious plans had been unveiled to create a new, sustainable model to cope with inclement weather. But not much seems to have come of it. There are other manifestations of this criminal indifference. The government continues to turn a blind eye to the demands of modernizing drainage facilities: the chief minister announced that new pumping stations would be made operational this year too. Encroachments allegedly continue to choke the Mithi river, compromising its flood water carrying capacity. The plans of regenerating wetlands as well as the creation of alternative channels to flush out excess water remain on paper. Not much improvement can be expected in this respect unless ecological imperatives are integrated into urban designing. Meanwhile, science suggests that monsoons would turn erratic but heavier in the near future because of irreversible changes in the climate. Mumbai’s insomnia is likely to worsen.

Mumbai gets heaviest rainfall since 2005: Twitter flooded with anguish