Mob murders by any name 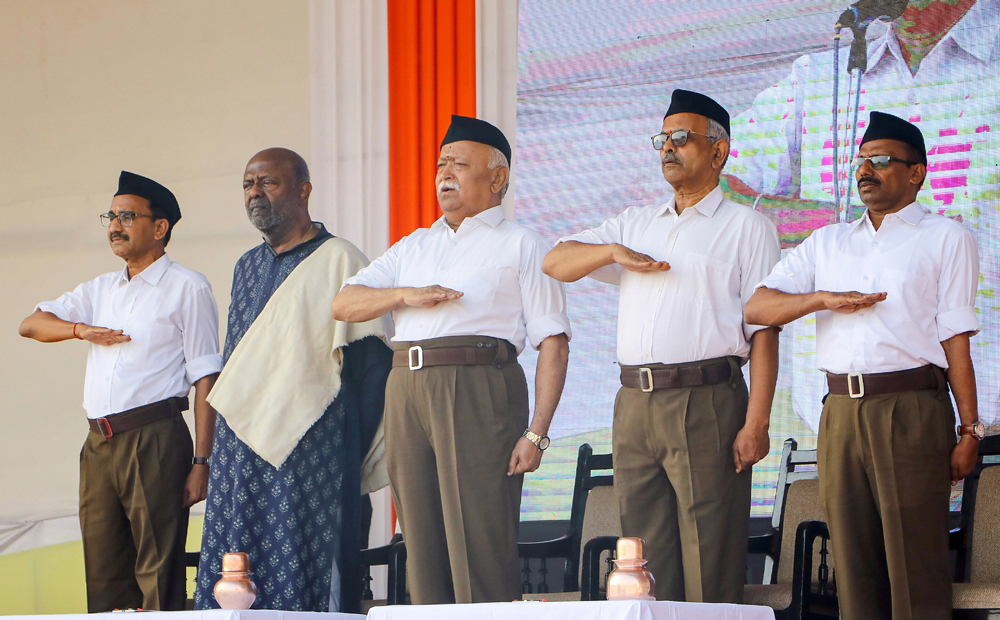 RSS chief Mohan Bhagwat (centre) in Nagpur on Tuesday. Also seen in the picture is Shiv Nadar (second from left), the HCL founder and chairman
(PTI photo)
The Editorial Board   |   Published 11.10.19, 07:54 PM

Naming is blaming, or even shaming, according to the chief of the Rashtriya Swayamsevak Sangh, Mohan Bhagwat. Speaking on the RSS’s foundation day in Nagpur, Mr Bhagwat deplored the grafting of Western concepts onto the expanding Indian practice of mob-killing. It is unacceptable to use the word, ‘lynching’, for what he sees from his cloudy heights of morality just as ‘isolated incidents of violence’. This suggests that the RSS and its ideological cohorts are not yet satisfied with the growth in the number of mob-murders of members of the minority community, underprivileged castes and other vulnerable, solitary beings perceived as deviant, whether in gender orientation or mental stability. These killings become branded by the Western word, ‘lynching’, so that they can be wielded to shame India and Hindu society, and cause divisions in the diverse society that the RSS loves.

Mr Bhagwat’s point is well taken. Had the convicted mob-killers of Alimuddin Ansari ‘lynched’ the coal trader last year under the alibi that Ansari was transporting beef, the Union minister of state for civil aviation would not have garlanded them. That he did garland them proves the unmistakable Indian flavour of their killing. The minister reportedly also told the BBC that he and the Bharatiya Janata Party were paying for their legal expenses. Given the practised deftness of such incidents, there is no need to defame Hindu society with Western nomenclatures: lynching is the name of things that happen in other countries, or among other religions, as Mr Bhagwat proclaimed, they are not part of this country’s traditions.

Instead, it is important to get the name right for the killings being made traditional in recent times. Should these just be called hate crimes? Or would that make Mr Bhagwat anxious to protest his love for the diverse populations of this country? Love must be clouding his vision — rose-tinted glasses are a Western notion too, more’s the pity — for the ‘isolated’ incidents of violence he has deigned to notice amount to the steepest rise in mob-killings since 2016. According to Amnesty International India’s interactive tracker, from January to June this year, 181 incidents of alleged hate crimes have been recorded, with the greatest number of mob-killings presumably being caused by the fact that the victims were Dalit, with the second highest number of victims being from the largest minority community. Members of other minority groups, of caste, community, and gender, make up the rest of the targets. Mr Bhagwat is so upset about improper naming that the fact that innocent individuals are being killed by mobs who have nothing to do with the dispensation of justice in court seems to have escaped him. He is busy blaming those who shame Hindu society by using Western names for Indian killings, yet he cannot acknowledge that mob-killing is the most damning attribute of any society. He can barely see it, after all.