Memories create places as much as place produces memory 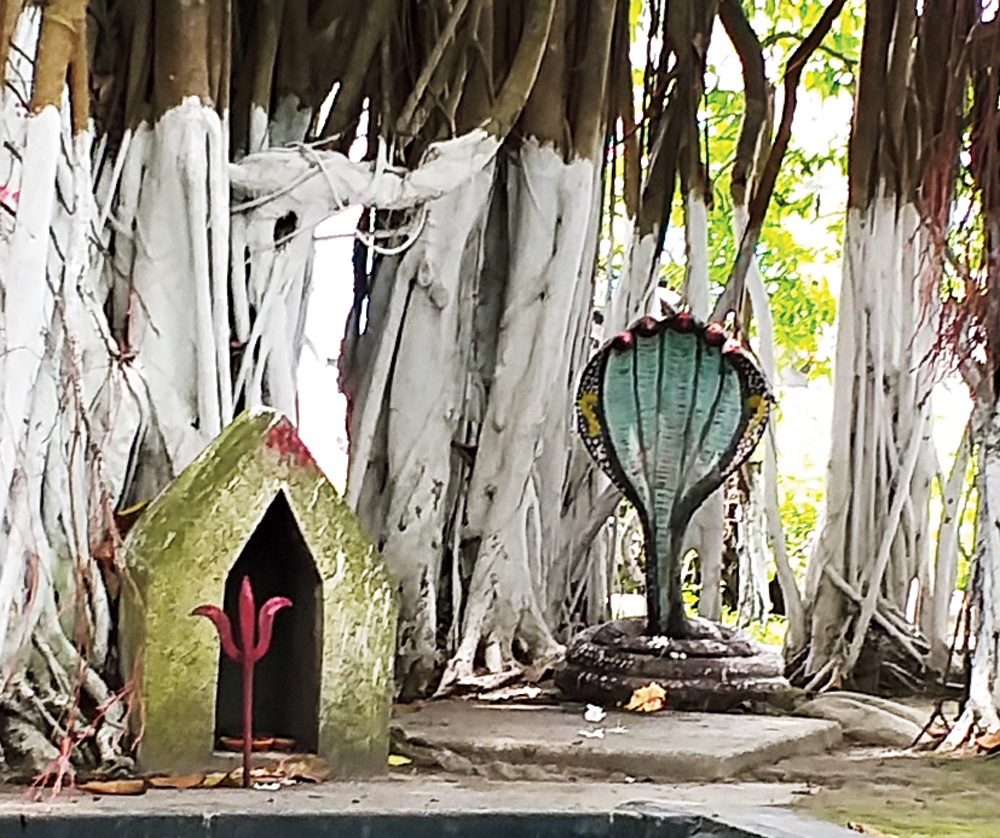 The mid-morning sun was blinding as the car turned left at Goshala More near Jalpaiguri town. Ahead, work on a national highway barred the way forward, as machines and hard-hatted men moved about on a harsh, dust-whitened surface. But it only needed a step aside and down an uneven side of dried mud, away from the car and the road, to enter a space overrun with spontaneous green and clusters of trees, dominated by a massive old banyan. Around its base on both sides — although it is impossible to see one side from the other — are symbols of Shiva worship. The surroundings are not wild: three young men sit chatting on a cement platform a little way further in, with the fragmented walls of a roofless building in faded pink in the background. Another pink and maroon structure with a tin roof shelters a shivlinga; close by a pink and blue walled chamber with a locked green door carries a painted notice saying in Bengali: “Sri Sri Debi Choudhurani Smashan Kali Mandir”.

But that is not the temple. A left turn further into the green pocket leads us down the temple’s side round to its entrance turned away from the road and its busy-ness. The building is in the familiar style of suburban temples in much of India, clearly not of the age of the image within. Collective local memory has it that Debi Choudhurani, a valiant leader of the peasants’ rebellion in the 18th century, would come ashore from her ‘bajra’ on which she roamed the Teesta and Karla rivers, pray to Kali here and rest before entering Baikunthapur Forest, where she would meet not only the peasants she helped but also Bhabani Pathak, a leader of the sannyasi and fakir rebellion. People believe she robbed the rich, or at least the British and their representatives who mercilessly taxed landlords and peasants, to give to the poor. But official accounts of the time describe her as a bandit, naturally, as does E.G. Glazier’s A Report on the District of Rungpore (1873): “We just catch a glimpse from the Lieutenant’s report of a female decoit, by name Devi Chaudhranee, also in league with Pattuck, who lived in boats, had a large force of burkundazes in her pay, and committed dacoities on her own account, besides getting a share of the booty obtained by Pattuck.” The lieutenant referred to is Brennan of the British East India Company, and Pattuck is Bhabani Pathak.

Glazier adds: “Her title of Chaudhranee would imply that she was a zemindar, probably a petty one, else she need not have lived in boats for fear of capture.” Later research has not been able to add a great deal more to flesh out this many-sided woman. The times were tumultuous, with the remnants of Muslim rule gradually breaking down and the British East India Company, just granted the dewani of Bengal in 1765, pushing the envelope towards greater control, with taxes the only interest of their appointed middlemen. Meanwhile, the hideous famine of 1770 exacerbated the lawlessness already present throughout the province, and a devastating flood in 1787 that dramatically changed the course of the Teesta in 1787 added to the upheaval. Debi Choudhurani was supposed to have been the widowed ruler of an estate in Rangpur, out of which Jalpaiguri was carved as a separate district in 1869. Now, of course, the land, waters and forests among which she ranged belong to two countries. Of three Debi Choudhuranis active between the mid-1760s to the end of the century — most women estate owners had this title — with the first name Joydurga, some researchers suggest that the owner of the Manthana estate was our heroine, even if the evidence is rather fragile. In spite of the loss of most documents from the time, a few letters from her to the revenue collector’s office have been found. But they show a responsible estate owner, not a bandit or rebel leader. Was she all of these?

It is no wonder that Bankim Chandra Chattopadhyay, whose birthday fell earlier this week, cautioned readers against regarding his 1884 novel, Debi Choudhurani, as historical, although he admits that the name of the heroine, of Bhabani Pathak, Brennan and the collector, Goodlad, are taken from history. Yet the work not only captures the tragedy and lawlessness of the times, but also communicates a spirit of resistance, of reckless defiance of injustice, tyranny and cruel exploitation, a sense of spirited female gallantry, and a belief in principled physical, intellectual and moral education. It seems as though around the novel lies a scattered landscape of popular memory, an adoring remembrance of saviours of the poor, dotted with memorials, such as the temple to Bhabani Pathak and Debi Choudhurani at Shikarpur, built by the landlords of Raikat who owned vast tracts in the Baikunthapur Forest — the temple burnt down in 2018 — and another on the Belacoba-Rangdhamali Road near Raigunj, as well as the temple at Goshala More, supposedly Debi Choudhurani’s sanctuary.

In the temple, I stared, startled, into the eyes of a tall, glittering, black image which looked as if time had not touched it. For that one moment, an unfamiliar past heaved around me: I could clearly imagine an armed woman stepping off her boat on to a river bank now five kilometres distant amid a lowering forest that must have overrun the area now being pierced by the national highway and bending in obeisance at the feet of the image before me. History and geography, indistinguishable from myth and memory, soaked in fear, courage, misery, wickedness and worship charged the surroundings. Coming out into the open to the edge of the blinding road was the moment when the whole landscape took shape, embracing the past, the future and now, in which identities coalescing over time through shared knowledge and remembering could enrich themselves with what was to come.

From the banyan tree on the way to the secretive temple and back to the naked, widening road lay a landscape pulsing with invisible habitations, emanating stories to be told or stored away, moulding outlooks, presenting a hundred ways of belonging. It is only this impalpable but overflowing sense of the human that makes a landscape ‘live’. This is history without documents, geography without maps. In 1951, a pioneering writer of landscape study, J.B. Jackson, had said that landscape was “[a] rich and beautiful book [that] is always open before us… [we] have but to learn to read it”.

Such an approach, however, is rather far from the minds of the government officials who have apparently demanded documentary proof that the temple at Goshala More is Debi Choudhurani’s. Members of the temple committee, said a newspaper report earlier this month, are rushing around trying to find such proof. The widening of the National Highway 27 has meant that the temple has had to give up some of its land. For compensation, however, the committee needs to produce documentary proof that this is Debi Choudhurani’s temple. Government rules, or maybe the rules of unstoppable development, take no account of traditions or local memory, of landscapes carved out of popular belief or made sacred by a collective sense of the past. Margaret Drabble had written in 1979: “[the landscape] is a living link between what we were and what we have become. This is one of the reasons why we feel such a profound and apparently disproportionate anguish when a loved landscape is altered out of recognition; we lose not only a place, but ourselves, a continuity between the shifting phases of our life.”

At a time when erasing the past has become the sport of the powerful, it is more important than ever to protect the landscapes of memory.