Reinterpreting and revitalizing a classic 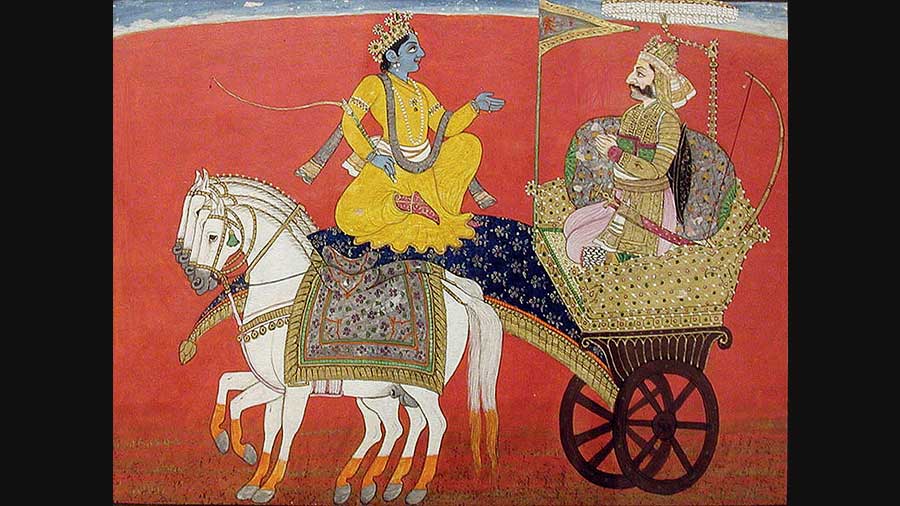 An artwork showing Krishna giving advice to Arjuna at Kurukshetra from the Edwin Binney 3rd Collection.
Wikimedia Commons
A. Raghuramaraju   |   Published 13.12.21, 12:15 AM

A classic may endure through time due to its inherent nature, but it can also be reinterpreted and revitalized for the modern age. This regeneration can occur either within a context or by revisiting its hidden aspects. Albert Camus revived Sisyphus in the contemporary context in his philosophical essay, “The Myth of Sisyphus”. The Mahabharata has been retold by several, including Kalidasa in Shakuntala, and, in modern times, by Sri Aurobindo in Savitri and Dharamvir Bharati in Andha Yug.

In addition to regeneration within a context, let me discuss the revival of a classic by revisiting and exploring the doctrine of nishkama karma, or non-attachment, in the Bhagavad Gita. Actions are intended, unintended, directed or without direction. Apart from these antecedents to activities, nishkama karma also turns our attention to a consequent — namely, the fruits of actions. Lord Krishna’s advice to Arjuna to renounce the fruits of his actions, including good fruits, makes the relation between action and the fruits or consequences contingent. This idea proposes a different moral theory altogether.

Although different, it is not easy to practise in day-to-day life and may not cut much ice with today’s generation. In contrast, the formula where there is a necessary relationship between actions and results is followed by people. In this formula, there is clarity, and it is easy to follow. Within this formula, invariance between action and result is ideal. For instance, A gives B a hundred rupees and gets the same amount back the next day. However, there can be two kinds of variance between action and result. One, the extent of the result is larger than the act’s purview. For example, a significant scientific discovery by great minds like Copernicus, Galileo, Newton or Einstein has far-reaching results, sometimes not anticipated by the actor. The profound impact of the results far exceeds the act of discovery. The second kind of variance is where the extent of the result is smaller than the purview of the act.

In addition to actions and their results, we should consider another variable: an actor’s interest in the act. For instance, someone is interested in studying medicine; he/she studies medicine and becomes a doctor. This makes him/her happy. Here there is harmony and continuity not only between the student’s act of studying medicine and the result — his/her becoming a doctor — but also with his/her interest in medicine. Here the results contribute to his/her further interest in medicine that can refurbish his/her actions.

There can also be variance among the three — action, result, and interest in the act. Even when there is continuity between one’s actions and results, there can still be a conflict between one’s interest in and capacity of doing an activity and performing the action. One may choose to study a subject simply because it has better job prospects. An individual may study hard, as many students do today, to obtain the degree. Despite a seemingly successful result, he/she may get a job but not be interested. While there is continuity between the action and the outcome, there is discord between the activity and the individual’s interest.  Consequently, even the accrued results may not contribute to refurbishing interest in the action. This kind of practice on a large scale can reduce the performance indicators of society.

Nishkama karma’s advice to the actor to turn away from the fruits can throw a better light on this social problem of performance. There is a spiritual aspect associated with the advice to turn away from the fruits of action. The advice also has a cognitive dimension. Let me underscore this in the following example. Moving from action one A1 to results R1 can distract in performing a subsequent activity A2. Consequently, the performance of A2 will be less efficient than that of A1, and the result R2 will be less than R1. In this process, the results can start diminishing. This can be circumvented if he/she moves directly from A1 to A2 and so on.

In addition, within the domain of action, unexplored and new aspects can be accessed, thereby leading to a comprehensive, as opposed to a narrow or shallow, understanding. The assumption here is that moving towards results is a digression and should be avoided. Factoring in this aspect can avoid the decline in performance due to preoccupation with results or from making actions as routine.

In most of the lasting achievements, discoveries, inventions, creative writing, the actors are focused on the domain of action. This increases the quality and levels of actions. In discussing the necessary and contingent relationship between action and result, moral theories across the world have not paid enough attention to the cognitive aspects of action. It is not an exaggeration to claim that the uniqueness of the Gita’s doctrine lies in brilliantly capturing the cognitive aspect of actions. In addition, this classical doctrine can guide us in our day-to-day activities. For instance, pursuing our actions with more focus can reduce indifference and inefficiency.

This way, revisiting unexplored classical ideas can make tradition dynamic on the one hand and rejuvenate the present on the other. A vibrant and lively past is less of a burden to the present than a frozen one. It is possible, especially in India, to pace up and down between the past and the present as the latter contains within itself many aspects of the former.