The death cult at Haridwar 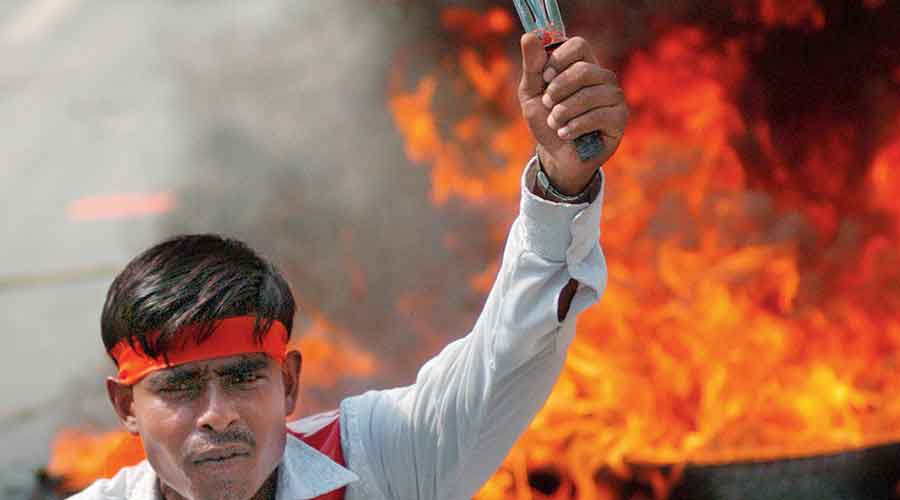 The gathering at Haridwar last week called itself a Dharma Sansad. It was, in fact, Hindutva’s natural answer to a LitFest, a HateFest. Hindutva, as Aakar Patel has recently reminded us, has no politics, no economics, no worthwhile books, no view of the world separate from its consuming hatred of Muslims in particular and minorities in general. Hindutvavadis produce hate in the same way as writers produce literature. Ergo, a conclave of Hindutva’s godmen will be a platform to peddle the only product majoritarianism can produce: hatred.

Swami Prabodhanand Giri, the president of the Hindu Raksha Sena, had a plan of action that he wanted to share. “And I’ll tell you what preparations those are. I will make myself clear, this is the solution, and if you follow this solution, then the path is made for you... in Myanmar, Hindus were being chased away. The politicians, government and police were just standing and watching. They started by killing them by cutting their necks, and not only this, but they began to cut them in the streets and eat them. The people watching thought we are going to die, we are not going to live.”

“This is our state now. You have seen this at the Delhi border, they killed Hindus and hung them. There is no more time, the case now is that either you prepare to die now, or get ready to kill, there’s no other way. This is why, like in Myanmar, the police here, the politicians here, the army and every Hindu must pick up weapons and we will have to conduct this cleanliness drive (safai abhiyan). There is no solution apart from this [italics added].”

This was only one of many speeches in this vein made by the sansad’s professional communalists who have made renouncer’s robes their calling card, but it was interesting for the way in which it domesticated a desi version of the final solution. The excess of this rhetoric shouldn’t distract us from the fact that Prabodhanand and his cohort were publicly calling for genocide: the systematic killing of India’s Muslims. In a rhetorical move that only a grandmaster of viciousness could make, Prabodhanand managed to suggestively merge the prime minister’s drive against open defecation, the Swachh Bharat Abhiyan, with his own safai abhiyan, the ethnic cleansing of Indian Muslims.

The most telling thing about Prabodhanand’s speech is his invocation of Myanmar as both precedent and inspirational example. This cross-border reference shouldn’t surprise us: there has always been a brotherhood of bigotry in the subcontinent. Benjamin Schonthal has written about the extent to which Buddhist majoritarianism in Myanmar is akin to Sinhala nativism in Sri Lanka, noting meetings between the Sri Lankan Bodu Bala Sena (Army of Buddhist Power) and the explicitly anti-Muslim, monk-led 969 movement in Myanmar. Ashin Wirathu, its most notoriously Islamophobic preacher, visited Colombo in late 2014 to sign a memorandum of understanding between the Bodu Bala Sena and 969.

This fraternity of fascists shares its ideas and anti-minority devices. Buddhist monks in Myanmar borrowed freely from the sangh parivar’s lexicon of anti-Muslim terms. Nyi Nyi Kaw has studied the similarities between Myanmar’s 969 organization and the RSS’s campaigning tactics. The supposed fertility of Muslim men and their practice of polygamy are seen as threats to the future of Buddhists in Myanmar. The allegation is that Muslim men are waging a ‘love jihad’; Ashin Wimalar Biwuntha, a 969 monk, the Burmese equivalent of Adityanath or Prabodhanand, has accused Muslim men of seducing Buddhist women “for their reproductive tactics. They produce a lot of children, they are snowballing”.

This similarity tells us something important about majoritarianism: its banality. Majoritarian denunciations of minorities can be cloned across countries because they bear no relation to the social particulars of any society. Indeed, the whole point of majoritarianism is to simplify its host society into sameness. Notice that Prabodhanand says Hindus when he means Buddhists while referring to the conflict in Myanmar. In his black-and-white mind, anyone who isn’t a Muslim is some sort of Hindu and, in any case, the ‘victim’ majority doesn’t matter so long as Muslims are correctly identified as the predatory
minority.

More generally, majoritarian hatred doesn’t need reasons; it simply needs a minority. The Sri Lankan case is instructive. Sri Lanka’s Buddhist majoritarians ‘solved’ their Tamil ‘problem’ by violently schooling Tamils into second-class citizenship after winning the civil war. This didn’t mean the end of majoritarianism. Without missing a beat, the Rajapaksas, their militant monks and the country’s communalized army found a new minority to practise their violent routines on: Sri Lanka’s Muslims.

Recently, Sri Lanka’s government banned the slaughter of beef because cow slaughter offended Buddhists and, not incidentally, was a trade controlled by Muslims. State-sponsored majoritarianism is a kind of permanent revolution: every victory over a minority is the cue for the targeting of another minority. Pakistan is a cautionary tale: having purged nearly every Hindu and Sikh and ‘purified’ the country into an almost wholly Muslim nation, Bhutto and Zia then inaugurated the violent disciplining of heretical Muslim minorities. Notice also Prabodhanand’s oblique reference to the ‘they’ who ‘hung’ Hindus on the Delhi border.

Perhaps the most revealing thing about the invocation of Myanmar’s Rohingya genocide as exemplary is that these homicidal Hindutvavadis see Myanmar as a model despite the pariah, failed-State status of the regime. Myanmar’s junta and its complicit ‘liberal’ politicians like Aung San Suu Kyi have effectively destroyed Myanmar by pandering to the country’s insatiable majoritarian monks and a Buddhist majority drip-fed a diet of minority hatred. Having purged Muslims from Rakhine, the junta and its army have gone after Christians in states like Chin, Kayah and Kachin, arresting pastors, shelling churches, even occupying them as military encampments.

That the likes of Prabodhanand see this political trajectory as desirable is a reminder of the derangement of the majoritarian project. The idea of genocide as a political goal reminds us that majoritarianism, like its fraternal twin, fascism, is a death cult. Puja Shakun Pandey aka Sadhvi Annapurna, another participant in the Haridwar hate-in, first urged her listeners to slaughter “20 lakhs of them” and then invoked Nathuram Godse, Gandhi’s assassin, as her inspiration. This is as close to satanism as an Indian political movement can get. Given Gandhi’s demi-divine status in the Republic’s origin story, valorizing Godse amounts to embracing Judas.

This is where we are nearly seventy-five years after Independence. The hate-in at Haridwar is a symptom, a sideshow. Prabodhanand and Pandey are a chorus for vigilante Hindutva’s real star, Adityanath, who himself is but a proxy for Modi. For seven years now, India has been treated to a politics that teeters between magic (demonetization) and mayhem (lynching). Now, on the eve of the elections in Uttar Pradesh, the robed outriders of Hindutva are calling for genocide. If there was ever a moment for India’s Opposition and its citizens to rally against this cult of death, it is now, in the run- up to this heartland election.