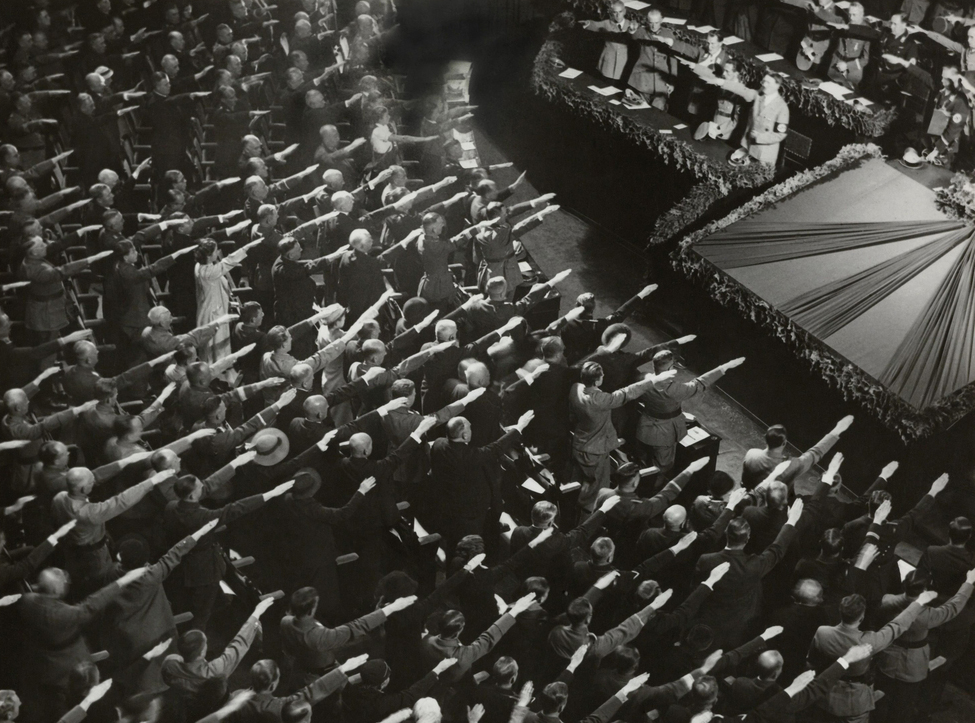 Every period of history throws up examples of infamy and disgrace. Alongside these, you often also find visual and audio-visual nuggets of hilarity and absurdity. Sometimes the comedy comes readily cloven to the evil and macabre, sometimes it is history that does the attaching. Think of footage of Adolf Hitler walking or driving past adulatory parades; think of his ridiculous mini-salute, the little flick of the hand as if swatting some pesky lice that were falling from his head, the Nazi salute minimized, presumably to save himself from repetitive strain injury. Think of Idi Amin peacocking through constantly changing costumes, or of Richard Nixon’s five o’clock shadow underlining his confidence trickster’s visage. Closer home, footage of Sanjay Gandhi showing us his 56-inch chest as he stomps around during the Emergency, followed by Doordarshan’s sycophantic cameras. Examine also the smug, safari-suited chamcha-entourage that accompanies Indira Gandhi during that same period.

Hitler, Idi Amin and Nixon were no laughing matter for the many victims of their horrendous crimes, who died or suffered terribly, by gas chamber, execution squad or napalm carpet-bombing. Yet, these men’s risible grotesqueries were nailed immediately, by Charlie Chaplin’s great spoof, by cartoons and by raw footage which didn’t need any comment. Likewise, the pomposity of Sanjay Gandhi and that of Indira’s travelling court are there to be seen, analysed and laughed at, even though the effect of these people’s actions was terrible.

In more recent years, the audio-visual artefacts of history have included not only the clips of various ‘leaders’ but also the TV reporters and anchors who reported on their times. You can map the impending collapse of the Soviet Union just by looking at how Soviet TV news anchors read their news reports through the 1980s, by what they say in relation to what is actually happening, what they leave out, by their expressions and their gestures. Similarly there are also precious gems from the West: one such that comes to mind is from 1986, when the otherwise sane news anchor, Dan Rather of CBS News, excitedly asks his reporter, sitting in a hotel room in Tripoli, to “put your microphone out that window” so that the American people can hear their planes bomb Libya. Three years later, another hotel window yielded an image that escaped a news blackout and etched itself into history — a young man with shopping bags in both hands blocking the way of the lead tank of an armoured column that had rolled in to confront unarmed, non-violent student protesters in Beijing’s Tiananmen Square.

No matter the slight jingoistic surge about sticking the microphone out of the window, if you watch Dan Rather report the US air force’s raid on Libya, you note that he repeatedly points out that there is no confirmation that the planes have hit their targets, nor is it fully confirmed that all the planes are safely back at their bases. Whatever the level of Rather’s patriotism, it never gets in the way of a cold-eyed adherence to relaying the facts as they become apparent. Within a few years, all this goes through a shift, as the US among many other countries, develops what we could call ‘partisan news channels’. The model set up by the BBC and the American news agencies around the Second World War, which more or less conveyed the facts to their listeners and viewers, is thrown out of the window by channels such as Fox News and others. Facts become like motorcycles, you can chose which one to ride and you can take it wherever you want to; the same footage with a different commentary and flashing tickers develops sharply divergent meanings on competing news channels; what is important is not so much the facts but what ‘spin’ a particular channel or anchor puts on what you are seeing and hearing.

Over the last few years, we in India have become mass victims of an experiment which has been taken to unimaginably absurd extremes. Wherefore you get two major channels overlaying the sounds of different political ‘nara’s on to footage of student leaders who never shouted those words. Thus criminally framed and falsely branded, these young leaders become marked as ‘anti-national’, as ‘terrorists’. Encouraged by these same liar-channels, an open season is declared on these young men and women where self-proclaimed patriot-vigilantes can assault or try to kill them. There is no government standards agency or ombudsman to reel in these criminal channels, to fine them or shut them down for a punishment period. Thus encouraged, yet another major liar-channel is launched with the full backing of a member of the ruling party and one of the main anchor-perpetrators of these lies shifts over to lead the channel.

The falsehoods of these Chaplusi-champions become more and more brazen. In a country where the national motto is ‘Satyamev Jayate’, the operational motto of the people in power and their toady media channels is ‘We can make people believe whatever we want’. A moment that will go un-erasable into history are the banner headlines from one of these repugnant channels reporting the incident of a young man walking towards peaceful protesters at Jamia brandishing a gun and then shooting a student. At first — with no way of knowing who the shooter was — the channel implies that the man is an anti-CAA protester, a banner on its Hindi channel even saying “CAA ka virodh pistol tak” — the anti-CAA protests have gone till the gun. When it becomes clear that the shooter has clear Hindutva links, the channel flips the narrative and proclaims ‘End the Provocation’ and #StopProvokingIndia as if the shooter had somehow been provoked by the peaceful protesters. Added to this is a command — this from a so-called ‘news’ channel — ‘Vacate Shaheen Bagh now!’ both falsely connecting the incident at Jamia to the non-violent Shaheen Bagh protests and demanding that citizens end their protest. Once this period we are living through has passed, this series of banners blatantly lying to viewers will become a marker of this time.

Even more recently, on a competing chamcha-channel, a loud spokesperson for the BJP-RSS, thinly disguised as an anchor, loses his chassis as the exit polls from the Delhi state elections indicate a solid victory for AAP. “...[T]he fact that Mughal rule will come back, Ram Mandir, Article 370, Kashmir, all these have no meaning for Delhi’s public... nor are they worried about the country breaking up... the people of Delhi are completely caught up in their daily lives and don’t care two hoots for what happens to the rest of the country... they only care about local issues... the Delhi people have now told us that these (national issues) are great to see on channels and read about in newspapers... when we go to some party, then, with drinks, these things are good to discuss, but when we vote we will only look for what we get for free... the people of Delhi have proven they are lazy... they only want to give their point of view on smartphones... ”

Whatever the actual results coming in from Delhi as you read this, one can only hope for the sake of this ‘anchor’ that the exit polls have got it right and the BJP-RSS-EC-EVM combine don’t pull some smelly rabbit out of the hat. Regardless of who forms the government in Delhi, or what happens to the country in the near future, these gems from this buffoon and his ranting, raving partner in crime on the other channel will stay as evidence of the complete takeover of our media by the basest propagandists of the current regime. And, even as they fall off their chairs laughing, people looking at this material in the future will shudder at the complicity of the media in the horrors being perpetrated upon our country.

Denied or shut up

‘Sad’ truth in the mirror for media, says Ravish Kumar