Advertisement
Home / Opinion / Letters to the Editor: Taliban's diktat on women in Afghanistan

Letters to the Editor: Taliban's diktat on women in Afghanistan 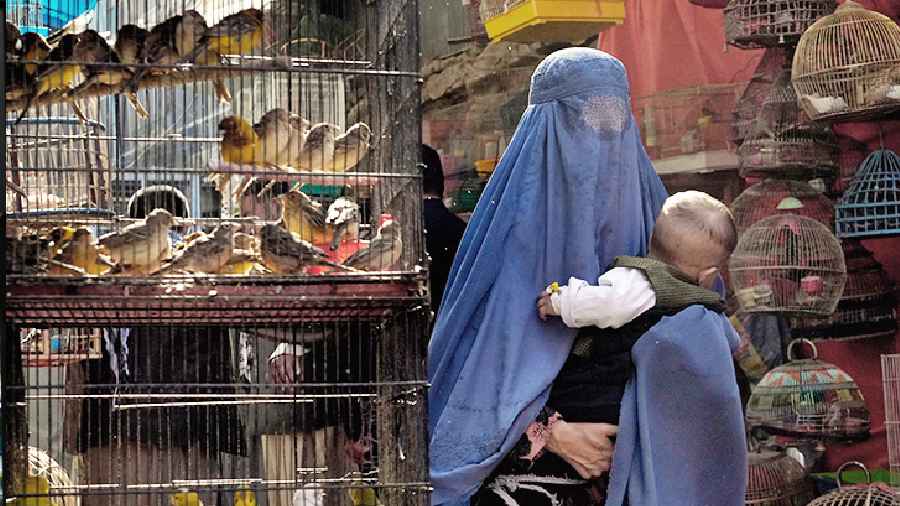 Recently, the Taliban government issued a decree ordering Afghan women to wear the all-enveloping burqa in public.
File picture
The Editorial Board   |   Published 11.05.22, 02:41 AM

Sir — The script is unfolding in familiar ways in Afghanistan. Recently, the Taliban government issued a decree ordering Afghan women to wear the all-enveloping burqa in public. The government has already restricted women from travelling long distances alone, working outside healthcare or education, and receiving a secondary education. But with the massive exodus of trained medical professionals from Afghanistan, the few women who are still working are critical to ensure that the healthcare system does not collapse. It is clear that international censure is not enough to deter the Taliban from imposing restrictions on women’s conduct. One can only hope that the Taliban recognize the contributions of women to public life before it is too late.

Sir — Sri Lanka is facing its worst economic crisis in decades. The prime minister, Mahinda Rajapaksa, resigned under pressure from the Opposition parties. This came after violent clashes took place between supporters of the prime minister and anti-government protesters. At least eight people have lost their lives and over 200 people have been injured in the violence that is taking place across Sri Lanka. Buses and houses were torched, including the family home of the Rajapaksas in Hambantota. Other nations must learn from the critical situation in Sri Lanka.

Sir —  The Rajapaksa family and its supporters are primarily responsible for the ongoing crisis in Sri Lanka. Corruption, misgovernance and negligence have led to such unprecedented turmoil. Mahinda Rajapaksa should have resigned much earlier. He has recommended the formation of an all-party interim government in his resignation letter to the president.  In the end, it is the common people who suffer the most. It will take some time before normalcy can return to Sri Lanka. The new government, which is expected to be formed shortly, must do all it can to bring the situation under control.

Sir — The upheaval in Sri Lanka is worsening by the day. The resignation of Mahinda Rajapaksa will now put pressure on the president, Gotabaya Rajapaksa, to follow suit. The Rajapaksas have failed to maintain law and order in the country during its hour of crisis. Crippling debt along with failures in governance have led to the dismantling of peace and stability. Hopefully, Sri Lanka will emerge from its troubles soon.

Sir — The way the 19-yearold Spanish tennis player, Carlos Alcaraz, clinched the ATP Masters 1000 title at the Madrid Open after defeating the defending champion, Alexander Zverev, 6-3, 6-1, was extraordinary (“Giantslayer Alcaraz annexes Madrid title”, May 9). Alcaraz defeated Novak Djokovic, Rafael Nadal and Zverev — they are among the top five players in the world — in an extraordinary display of grit and talent. The young player must be congratulated for his meteoric rise in rankings from 120 a year ago to a career-high of No. 6. Perhaps Alcaraz will take the place of Nadal as a clay court champion in the years to come.  On the other hand, the Tunisian player, Ons Jabeur, made history by becoming the first African player to claim a Masters title. This was certainly a memorable tournament.

Sir — Carlos Alcaraz has shown incredible physical and mental strength by defeating veteran players like Rafael Nadal and Novak Djokovic. He is an inspiration to all young players. Perseverance and hard work are key to success.

Sir — It was shocking to learn that it takes 138 hours, 22 documents and 55 signatures to move a truck from India to Bangladesh. Cecile Fruman, the director of Regional Integration and Engagement in South Asia Region at the World Bank, further revealed that only 5 per cent of the total trade in South Asia is within the region. It seems that all proclamations of increasing connectivity in the region remain unfulfilled.  Intra-regional trade stands at 25 per cent of the total trade among the members of the Association of Southeast Asian Nations and 60 per cent in the European Union. India must increase its proportion of trade with other countries in the neighbourhood.

Sir — The food safety department in Kerala has come down heavily on eateries for having unhygienic conditions and stocking stale food after a young girl died of food poisoning. She had consumed shawarma from an eatery in Kasaragod. Several other people were hospitalized after eating from the same outlet. The shigella bacteria has been identified as the cause of food poisoning. Since then, officials have seized large quantities of rotten meat from shops across the state.

This incident shows that eateries operate under extremely unhygienic conditions — the shigella bacteria spreads through the use of contaminated water and food. It is important to maintain cleanliness when preparing and handling food. The authorities must remain alert and periodically inspect these establishments. It is high time that the Centre as well as the state government strictly implemented food safety regulations.

Sir — Roadside eateries often do not maintain hygiene. It is best to limit food intake from these stalls.