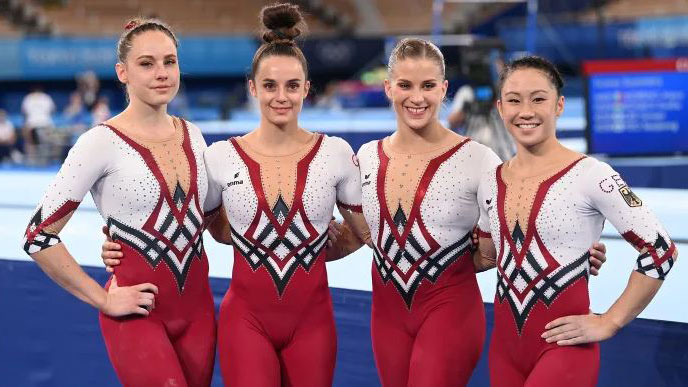 Sir — It was inspiring to witness the German women’s gymnastics team opt for full-body suits in the qualification round at the Tokyo Olympics in a move to promote freedom of choice and to encourage women to play in what makes them feel comfortable. This step was necessary after the Norwegian women’s beach handball team was fined for refusing to wear bikini bottoms during a game in the Euro 2021 tournament — they wore thigh-length elastic shorts instead. Why are women athletes not allowed to compete in clothing they find comfortable, especially when it does not affect their performance in the least? The same restrictions, curiously, are never put on men.

Sir — India might be engaging all stakeholders in Afghanistan, including parts of the Taliban, as part of a ‘multi-track’ strategy, but it cannot be forgotten that the Taliban are allergic to peace. The increased violence and the rapid territorial gains made by the militant group in Afghanistan since the United States of America began withdrawing its troops show that the former have no intention of bringing political stability to the war-ravaged country.

For India, this is cause for great concern. First, if the Taliban capture the Afghan government by force then there is a great likelihood of insurgents from the outfit being used by terror groups in Pakistan to target India. Second, even though the Afghan defence forces have largely succeeded in maintaining peace in Kabul and its adjoining regions, it is likely that the Taliban will disrupt development projects and destroy infrastructure in the countryside, which they have already seized.

The US and Nato have promised to give Afghanistan $4 billion annually for countering the Taliban. New Delhi must use this as an opportunity to salvage its investment of $3 billion in several infrastructure and trade projects in Afghanistan. Negotiations with the Taliban may be inevitable, but India must be prepared for an unfavourable outcome.

Sir — As the prospect of the Taliban fighting their way back into Kabul becomes more likely with the withdrawal of US troops from Afghanistan, there is a growing perception in India that the situation holds no glad tidings or even a silver lining for our country. There are several concerns — if the Taliban regain power, not only will India lose its influence, but the battle-hardened militants may also turn their attention to Kashmir.

The return of the Taliban will be terrible for the people of Afghanistan; moreover, they will try to pose the same kind of threat to India as they did in the 1990s. Even then, the Taliban’s hostility towards India was found to be driven more by the agenda of Pakistan’s military-jihadi complex than anything else. In recent times, its adversarial position towards India has been in response to India’s support for the Afghan government. Now, there may be greater threats to India from the Taliban — supported by Pakistan — in Kashmir.

Sir — Evil often prevails in this world because people in positions of power choose to engage with those who perpetuate crime and terror. At this time, Afghanistan is reeling under the brutal activities of the Taliban. Amid such a situation, Russia allowed a visit by a Taliban ‘delegation’ earlier this month. Then, a ‘delegation’ led by the Taliban co-founder, Mullah Abdul Ghani Baradar, went on a sudden visit to China and held talks with the Chinese foreign minister, Wang Yi.

In what capacity are the members of the terrorist group being allowed to go on such diplomatic missions? Are they representatives of the Afghan government? Have these ‘delegations’ been sent by the Afghan president, Ashraf Ghani? If that is not the case, then why did the Russian and Chinese governments allow the ‘delegations’ made up of militants to visit their major cities? If political leaders keep affording such legitimacy to extremists in this manner, then it is highly unlikely that terrorism will ever be eradicated. While there may not be any permanent enmities or friendships in politics, extremism must be opposed at all costs.