Letters to the Editor: Christmas revelry at Park Street 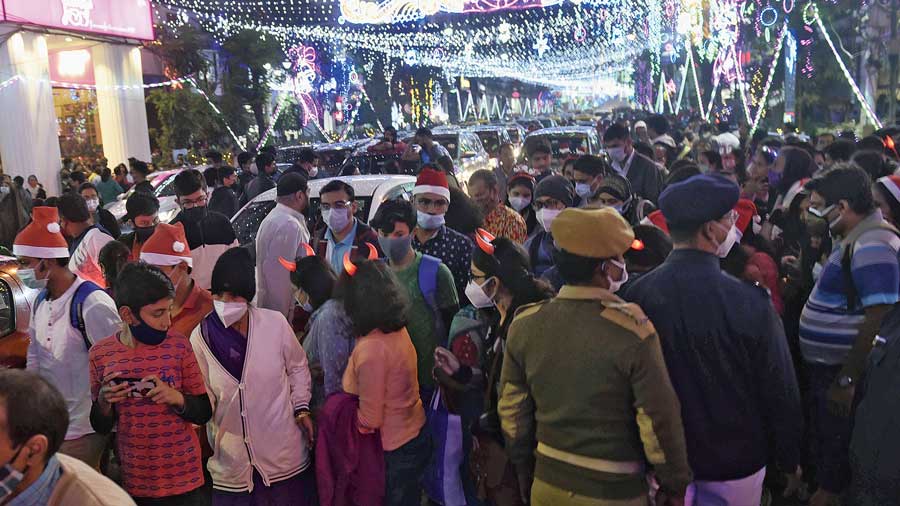 Sir — It was disheartening that a massive crowd turned up at Park Street on Christmas Day in spite of the rising number of Omicron infections (“Revellers drop Covid caution”, Dec 26). Pictures showed thousands of people throwing Covid-19 precautions — wearing face masks, maintaining social distance — to the wind. With the third wave imminent, the West Bengal government must rethink its decision to relax the night curfew restrictions for the holiday week. In this context, the Delhi government’s move to ban all cultural events and gatherings on Christmas and New Year is laudable.

Sir — Multitudes have been thronging to Park Street from the beginning of Christmas week. The revellers were dangerously reckless — many were seen without face masks, others had their masks lowered in order to take selfies. In light of this, health experts have warned of a surge in Omicron infections in the city. This is alarming. We must keep our guards up so as to have a safe and happy new year.

Sir — Covid cases are rising in Bengal. With that, the new Omicron variant is also rearing its ugly head. The government must see to it that massive crowds — Park Street and amusement parks in Calcutta witnessed a huge rush on Christmas Day — are not allowed to gather. Precautionary measures are the need of the hour.

Sir — The death of Archbishop Desmond Tutu, an icon of the South African anti-apartheid campaign, is heartbreaking (“Voice that helped end apartheid”, Dec 27). Tutu was a guiding light in the fight to end racial discrimination. He collaborated with another great icon of South Africa, Nelson Mandela, to eradicate the evils of apartheid. His tireless work towards laying the foundation of a strong community free of prejudices won him the Nobel Prize for Peace. Tutu’s work will inspire future generations.

Sir — The world has lost a gifted orator with the death of Archbishop Desmond Tutu. He, along with Nelson Mandela, was one of the architects of modern South Africa. At a time when countries across the world are plagued by religious divisiveness, Tutu stood out as the voice of inclusivity, peace and equality.

As chairman of the Truth and Reconciliation Commission in post-apartheid South Africa, he advocated for reconciliation among the races. His non-violent opposition to discriminatory practices was much like that of Mahatma Gandhi. His teachings remain relevant in today’s fractured world.

Sir — Archbishop Desmond Tutu and his comrade-in-arms, Nelson Mandela, fought relentlessly to end apartheid in South Africa. A powerful orator, Tutu used the church as a platform to protest against injustice, delivering political sermons from the pulpit.

After South Africa held its first democratic elections in 1994, Tutu, who never stopped being the conscience-keeper of the country, coined the term, ‘rainbow nation’, to celebrate diversity. He was a man of forthright views, whether it was on poverty, human rights or climate crisis, and he expressed them eloquently.

Sir — It is laudable that the Congress leader, Ghulam Nabi Azad, said that Pakistan cannot take an inch of Jammu and Kashmir’s territory in spite of all its efforts to do so. The former chief minister stated this while addressing a public meeting at Khour near the international border in Jammu. Asked about his opinion on Valley parties such as the National Conference and the Peoples Democratic Party insisting on dialogue with Pakistan, Azad rightly said that the decision on holding talks should be left to the Central government.

However, the Narendra Modi-led dispensation cannot be averse to talks with Pakistan if the latter is willing. It is equally true that talks and terrorism cannot go hand in hand. Pakistan must ensure that no acts of terror are carried out on
Indian soil.

Sir — Ghulam Nabi Azad has behaved like a true statesman by saying that matters of external affairs — whether problems pertaining to Kashmir need to be discussed with Pakistan — should be left to the Central government. Leaders like Azad who do not mix political differences with issues that affect national security are needed in India. Other leaders in the Valley should follow his lead instead of inciting an already simmering flame by suggesting talks with Pakistan. Such demands are not conducive to peace in the Valley.

Sir — The era of Covid-19 has ushered in a new normal, comprising changes that were almost unimaginable two years ago. In an effort to bring varied experiences to people stuck at home, a Japanese professor has invented a prototype television screen that enables viewers to not just watch and hear the content but taste it too. For instance, the invention will allow viewers to experience the seemingly heavenly food produced in culinary shows by licking the TV screen. However, there may be a glitch. Loss of taste is one of the symptoms of Covid-19. Would a user not being able to taste the food on TV be able to tell whether it was the device that was malfunctioning or if he had contracted the virus?