Let's manage our garbage, for starters

For all their elite education, why are the city's wealthiest oblivious to the need to address the impending disaster? 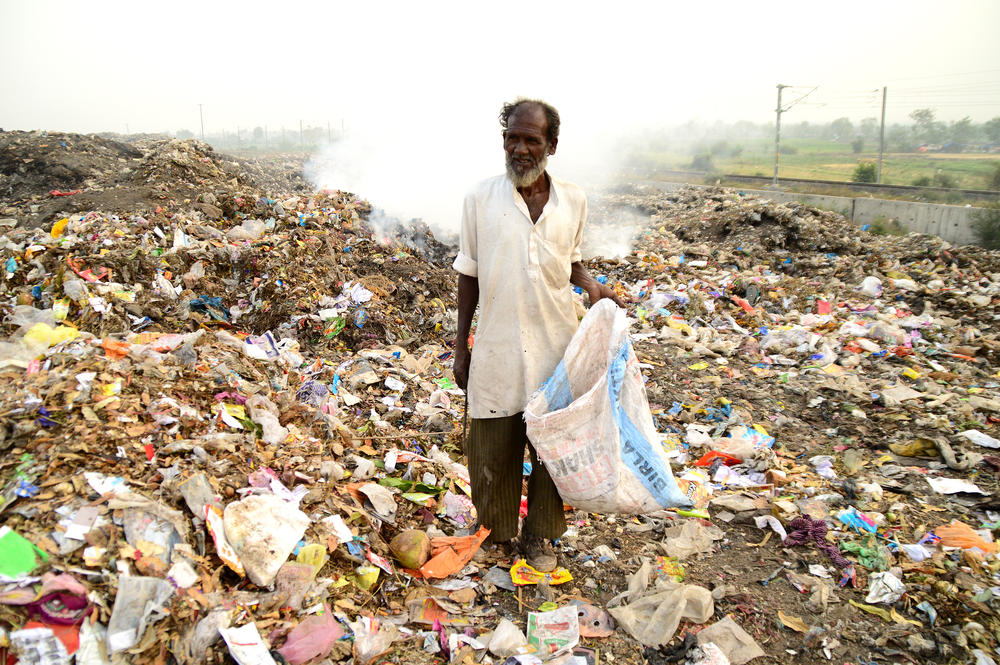 Workers who deal with our waste should be afforded a safer, better paid and more dignified work environment
Shutterstock
Ruchir Joshi   |     |   Published 14.10.19, 09:21 PM

The parking lot of the big multi-story apartment building next door has a reasonably impressive collection of cars. Rubbing side view mirrors with mid- to high-end sedans are Mercedes and Audis, lower end ones and also the somewhat posher models. I think I may have seen Jaguar and Porsche SUVs parked below but they might only have been visiting. The parking lot is not a static place: from about 5am in the morning the cars start moving; people going for morning walks honk their horns to call down walking partners, completely oblivious that in close proximity are other buildings where people may still be sleeping; then comes the washing of the cars, where the owners’ employees put the vehicles through their morning ablutions with free flowing water, sometimes with the car stereos switched on, so that the whole cluster of buildings is treated to an aleatory or chance operations orchestra of music blasting out and getting chopped off as the car doors are opened and shut; it is only after this two-tiered morning sound-offering that the normal day starts, with all the traffic and other sounds joining in.

At times across the year, especially just after the monsoons, a foul stink seems to rise out of the shiny array of cars. Looking down, I can see that two cars at the very end of the row near the building have been moved out. In that space there are two or three garbage carts lined up, and men we like to refer to as ‘sweepers’ (garbage-collectors is perhaps a more suitable term), are going in and out of a filthy, dark room and pulling out loads and loads of dirty mulch. It seems like dignifying the grotesque mess to call it ‘rubbish’, but stronger, more accurate words would be inappropriate here. As the stinking heaps are balanced in the carts one can see the true innards of the way of life of an entire class of urban Indians: rotting food, plant matter, all sorts of plastic, varieties of absorbent pads, bits of wood and metal, bottles of all kinds.

From where I stand on my balcony I can only see the dark maw of the door and can only guess at the size of the room. Even though I’ve seen this ritual many times I am always surprised by just how much garbage seems to be contained in a room of that size; like the magicians’ old Water of India trick, the garbage keeps on emerging, well beyond the volume one could possibly imagine. The garbage-men take a full three days of work to clear the room, carrying away several cartloads of the grey-brown filth. As the men clear the stuff they also deploy phenyl, which adds to the mix of the hell-smell without attenuating anything. At some point on day two the waft of dead rat takes command of the stench rising up, on day three the fetor is somehow closer to human excrement. All through this, the Audis, Hondas and BMWs come and go, ACs on full blow, bubbled off as they sidle past this horrific labour and the hideous extraction it is bringing to light.

I know that there are not dissimilar garbage arrangements on the ground floor of my own building; the difference between us and next door is merely one of scale, between a building with just nine apartments and one with dozens. I look around at the densely overcrowded patch of real estate amidst which I live; all the multi-story buildings that have teetered up over the last four decades, and I force myself to imagine the same process taking place in each of them — each building’s entire garbage stuffed daily into some small concrete receptacle, the city’s wealthiest (and supposedly best educated) denizens completely divorcing themselves from their own detritus and leaving the work of clearing it to an underclass of workers sweating it out among the rat carcasses, right under the dripping air-conditioners, right next to the pampered cars.

Other humans will one day look back at our generations and this Calcutta ‘upper’ class and shudder in disgust. They will see us, every bit as we now see brutal medieval feudal lords, as having lived cruelly selfish lives, the lives we could get away with like criminals get away with crimes, touched by no knock of conscience or care for other people, or indeed the planet which we continually carpet-bomb with our poison. The future generations will note the absurdity of an entire privileged class that had delusions of Calcutta becoming a London or a Singapore, of India becoming a ‘world power’ while doing nothing to bring us up to the mark of other, more civilized societies. They will note that at this time Switzerland had a severe tax on each garbage bag every citizen puts out (you have to buy each biodegradable, government approved bag for a hefty price and be mindful how you fill it), that, along with Switzerland, many other European countries had three to four categories into which everyone, rich or not, had to sort out their own rubbish: non-degradable plastic, biodegradable plastic, glass (in separate colours, clear, brown and green), paper waste, organic food waste, and so on. Future generations will look at how our land, abundantly endowed with possibilities of controlling its waste, committed ecological harakiri out of stupidity, mindlessness and the greed of its controlling elites.

There was a time when I would be smug with people from Bombay and Delhi, saying that whatever Calcutta’s shortcomings, we had two things going for us: one, our local fruit and vegetables did not have to sit for several days in some cold storage before landing in our markets, and two, that everything but everything was recycled in our city. While the first may still be true, the second is no longer so. For instance, there is now no market for the reselling of glass bottles in parts of Calcutta — in fact, you have to pay people extra for taking away glass. Whatever the reason for the feet-dragging on CNG for buses, trucks and autos on part of both the Left Front government (from so long ago — do you remember them?) and our current Trinamul Congress dispensation, we are now more than a decade behind other cities as far as vehicular pollution is concerned. In a city of abundant sunlight we barely have any solar panels, in a state with a pretty feisty sea coast we have hardly any wind turbines, in a region where we could have created employment and out-of-the-box development around ecology, we are still looking at 19th century models of ‘industrial growth’, still pining for the missed opportunity when some car company could have set up a plant to make dangerously fragile, polluting little matchbox cars to add garnish to our traffic jams.

For all its elite education, why is the wealthier crust of our city oblivious to the critical need to address the impending ecological disaster? There should be proper waste management implemented in the high-rises, with punitive taxes if necessary. The organic garbage should go into compost and then into rooftop gardens that produce vegetables; all the buildings should have some sort of rain-harvesting system; plastic use should be reduced and the material sorted into separate bins; the paper, glass and wood rubbish should be sorted separately and sent to different recycling facilities. And yes, not least, the workers who deal with our waste should be afforded a safer, better paid and more dignified work environment. Let’s maybe begin with this, even as we work out larger issues such as how many bus-owners should be allowed to compete for each route, how all public transport can shift away from petrol and diesel and how many cars should each family possess and run.