The logic of Hindu nationalism 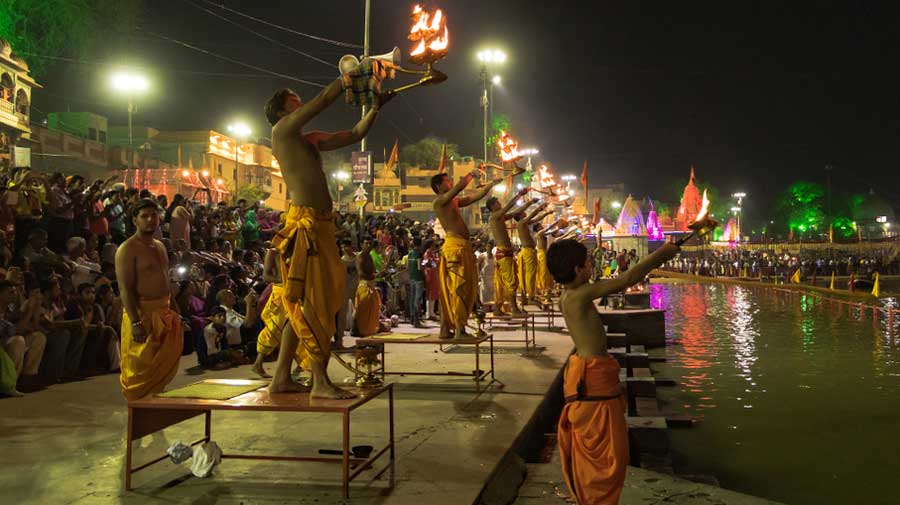 The government’s willingness to hold the Kumbh Mela in the middle of the worst health emergency in a hundred years and its unwillingness to curtail it despite a tsunami of second wave Covid infections raise an interesting question. Is Narendra Modi a rational actor on his own terms? Rational, here, doesn’t mean ‘secular’ or ‘progressive’. The question is simply this: if we allow for Modi’s majoritarianism, are his policy choices based on good information and best practice? Do they try to maximize the greatest good of the greatest number, once the welfare of minorities is subtracted?

The Kumbh Mela raises this question starkly because by the end of 2020, when the akharas began to lobby for an off-year Kumbh, its potential as a superspreader event was obvious. But Modi’s Central government and the Bharatiya Janata Party’s government in Uttarakhand chose to facilitate an unrestricted gathering of hundreds of thousands of people, risking a public health catastrophe that could endanger the lives of Hindus all over the country, because the virus, in its morbidly Nehruvian way, refuses to discriminate between Hindus and Muslims.

Why did the prime minister choose to do this? Modi is widely seen as a modernizer. Modi’s major policy initiatives, whether you agree with them or not — demonetization, the goods and services tax, the farm bills, digitization — invoke rational goals. But justifying the Kumbh Mela in terms of rational public health policy is impossible. Uttarakhand’s chief minister, Tirath Singh Rawat, didn’t try. He declared that the “flow and blessings of Ma Ganga will ensure coronavirus doesn’t spread”. Modi waited for days to pass and for lakhs of people to gather and bathe and then, after a week of spiking Covid infections, he prayerfully petitioned Avdheshanand Giri of the Juna Akhara, and asked that the mela be scaled down on account of the pandemic.

Why would the prime minister of India place himself in this supplicant position? The obvious answer is the right one: Modi thinks it is reasonable in a broadly Hindu country to defer to the core beliefs of Hindus. Hostile critics might call it pandering, but Modi’s position on the Kumbh Mela is consistent with, say, his position on the Ram Mandir. If millions of Hindus believe that Ram was born in Ayodhya, this belief is a fact. Reality must reshape itself to correspond to this juggernaut belief.

In the early months of his prime ministership, Modi addressed a conference of doctors in Mumbai and invoked the surgical genius of ancient India where an elephant’s head was grafted on to a human body to produce Ganesha. He could have invoked Sushruta, a historically-documented visionary, who pioneered plastic surgery, but he chose to inspire a gathering of trained doctors by citing a flagrantly impossible bit of folklore. He did this because it is important for majoritarians to teach civil society groups, especially groups of professionals, that modernity and science must defer to bedrock civilizational beliefs, that these beliefs can, indeed must, be respectably aired in scientific gatherings. In the 2019 session of the Indian Science Congress, a paper cited the hundred sons of Dhritarashtra as proof of stem cell research in ancient India.

So when akhara astrologers read their charts and declared that the alignment of the stars mandated that the Kumbh Mela be held in the eleventh year of the usual twelve-year cycle, Modi acquiesced, despite the pandemic. Given his political beliefs, he had no choice. How could this elemental gathering of Hindus and holy men be thwarted by second-order public health considerations? What sort of Hindu rashtra would pause a civilizational rite of purification for fear of an invisible speck?

Secularists, being cynics, see Modi as a modern authoritarian who uses religion instrumentally. They are wrong. They are confusing Modi with V.D. Savarkar. Savarkar was an atheist intellectual who tricked out an ethnic nationalism in Hindu motley. Modi, closer to the ground than Savarkar was, defers to sadhus in saffron motley because he senses in them a Hindu authenticity that he, a professional politician, lacks. This is not to argue that the sadhus and sadhvis in the BJP and outside it are a threat to Modi’s pre-eminence. It is to suggest that Modi believes that Hindu consolidation in India needs a vanguard of monks.

The reason Adityanath is the chief minister of Uttar Pradesh is that a renouncing monk in saffron can normalize majoritarianism and introduce it into public conversation in a way that no trousered bigot can. If you look at the way the BJP has used Adityanath as a majoritarian mascot and provocateur in assembly elections in states as remote from UP as Kerala, it is apparent that his function is to say the hitherto unsayable. It is a function that various sadhvis and sants have consistently performed in the BJP, from praising Godse to contrasting Ramzade and H******de.

Liberals in South Asia tend to be parochially focused on the politics of their own nations; majoritarian politicians have a more cosmopolitan awareness of like-minded communalists in their neighbourhood. The explicitly anti-Muslim 969, a monk-led organization in Myanmar, routinely networks with the Bodu Bala Sena, the self-styled ‘Army of Buddhist Power’ in Sri Lanka. The Organization for the Protection of Race, Religion, and Belief in Myanmar, popularly known as Ma-Ba-Tha (the abbreviation of its Burmese name), began in 2013 as a campaign to pass what were collectively known as the Race and Religion Protection Laws. In a little over two years, these laws were approved by the legislature and signed into law by the president. Myanmar’s success in purging a Muslim minority and the role of its Buddhist clergy in this ‘cleansing’ have not gone unnoticed this side of the border.

Hinduism lacks an organized clergy; it has nothing equivalent to the Buddhist sangha. But men and women dressed in the colour of renunciation have always had a certain cachet, never more so than now. Unlike deracinated liberals, Modi sees the power and political potential of this saffron cadre and, as the elevation of Adityanath illustrates, he has moved to co-opt it. Five years ago, a journalist suggested to me that if Modi ever failed he would be replaced by someone further to the right of him, more bearded, and more visibly Hindu than him. He had Baba Ramdev in mind and while he was mistaken in that particular, Adityanath’s career suggests that he was right about the general direction of travel.

But Adityanath shouldn’t get his hopes up. If Modi is to be replaced in office, he intends to be replaced by a world-renouncing avatar of himself. During the general elections in 2019, Modi was pictured meditating in a cave in Kedarnath, swathed in saffron. If there was a criticism to be made of the art direction, it was that his hair and beard were too smartly trimmed for the Himalayan ascetic look. That has been remedied now. The prime minister has grown his hair and beard out and were he to rig himself out in saffron again, his fleecy magnificence would make UP’s chief minister seem shorn in comparison.

I can see that happening as the prime minister decides, in the face of a tanking economy and a surging virus, to get back to Hindu basics. Not in Baba Ramdev’s outré breechclout style, of course; the prime minister is too couture-conscious for that. I imagine he will take a leaf out of Sadhguru’s dress code: the Oriental Sage (in orange) look. I can see the group photograph now: Narendra Modi, stern in saffron in the middle, flanked by Sri Sri Ravi Shankar and Sadhguru on his left and Baba Ramdev and Yogi Adityanath on his right. The caption writes itself: Swami & Friends.

No lessons learnt from pandemic