The house of art

The story of a gallery and an art revolution 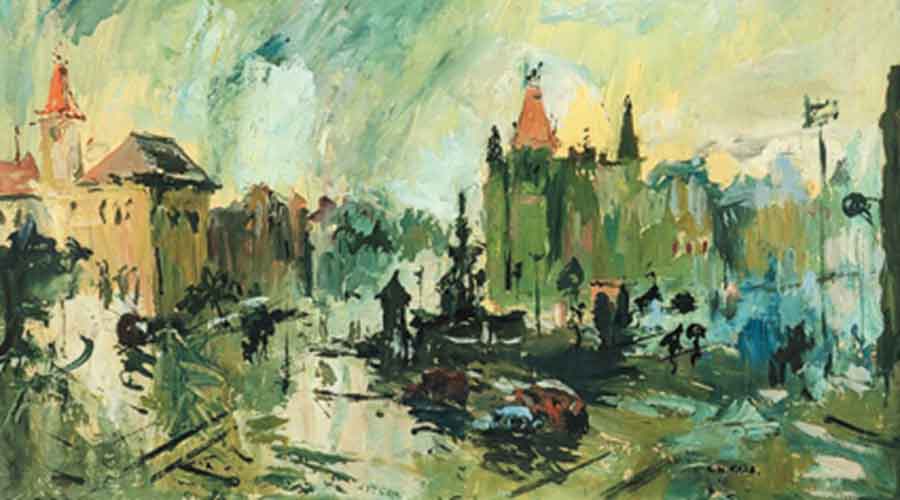 Often an important transformative moment in a city’s history becomes identified with a neighbourhood or even a house. While Colaba is not Montmartre, Bandra is not Bloomsbury and Kekee Manzil not quite Jorasanko, the mansion on the Bandra seafront was a hugely important site in the development of modern Indian art. Behroze Gandhy’s eponymous film, Kekee Manzil: The House of Art, is a documentary about her parents, Khorshed and Kekoo Gandhy, who played such a central role in launching the art scene in Bombay between the 1940s and 1960s. Part decade-traversing home-movie, part archive footage buffet, part Films Division homage (complete with constant Voice of God commentary and wall-to-wall background music, including a tabla riff exactly at the mention of a riot), the film offers many riches. If you are at all interested in modern Indian art, or in our country’s recent urban cultural history, or in the city once known as Bombay, or in the story of contemporary Parsis, or in interior decoration, or in the changing texture of the moving image over the last seventy years, then you shouldn’t be able to take your eyes away for any of the film’s 90-minute running length.

The story begins — as so many classic stories do — with a rich young man going abroad. The young man is Kekoo Gandhy, whose family has diverse business interests in Bombay and whose father has already built Kekee Manzil and named it after the apple of his eye. Kekoo goes to England just before the start of the Second World War and makes it back to aapru Mumbai after running the gauntlet of German submarines and such. The family expects him to take over its tobacco business, but Kekoo isn’t that interested. A meeting with the Belgian, Roger Van Damme, gets Gandhy interested in, of all things, the craft of making picture frames. He sets up a frame factory and a shop to sell those frames — India is about to become independent and a lot of people have a lot of images to hang in their homes. “My father was a chancer,” says the oldest daughter, Behroze, in her voice-over, the word used at its most benign valence, meaning Kekoo skipped from lucky break to happy accident to opportunity without giving long-term planning and boring graft too much of a look-in. The young scion’s luckiest break, perhaps, is being set up at a party with a beautiful Parsi girl called Khorshed. They marry within a short time and a great partnership is formed.

In the meantime, studying at the J.J. School of Art, is a bunch of young men who have ambitions of becoming artists of the modern world. With the advice of exiled Europeans like Walter Langhammer and Rudi Van Leyden, these Young Turks start to dream of a new kind of art — one that rejects what they see as the double cobwebs of European academic art and the ethos laid down by the Bengal School in the early decades of the century. Pushed by their European critic-advisors, these youngsters dream of emulating Picasso, Matisse, Roualt and the German Expressionists.

Around the time of Partition and Independence they attempt to find new visual languages to go with the young nation being formed around them and call themselves the Progressive Artists’ Group. An introduction to the Gandhys by Langhammer leads to a happy alliance between the well-to-do couple discovering a taste for new art and this bunch of impecunious but highly talented and confident painters.

By the time the Gandhys launch Gallery Chemould in the early 60s, they are completely immersed in supporting, collecting and selling the work of these painters who are today household names: Husain, Souza, Raza, Tyeb Mehta, Gaitonde, Ara. Kekee Manzil is an open house, where artists are always welcome. The Gandhys host dinners where the city’s wealthy denizens mingle with the young bohemians and are nudged towards buying their work, to the benefit of all three parties. Across the 1950s, as Calcutta with its ‘sunset’ industries yields further commercial primacy to Bombay, the eastern city also loses its position as the first city of Indian art, its painting styles sliding into a perceived obsolescence in comparison to the multiple sunrises of Indian modernisms taking place in what Calcuttans have always seen as the western urban upstart.

During the 60s, 70s and 80s in Calcutta’s cultural milieus, Bombay was always sneeringly referred to as a cauldron of excessive money, with garish bad taste as its corollary. As Kekee Manzil demonstrates, because of the Gandhys and others like them, Bombay was by then far more open than Calcutta to new ideas and experiments, whether in theatre, literature or art. If Raza and Souza left for foreign shores and the Progressives scattered, another generation of brilliant artists came along soon enough, gravitating to Bombay and Chemould. By the early 70s Ghulam Mohammad Sheikh, Nilima Sheikh, Vivan Sundaram, Bhupen Khakhar and Nalini Malani were at the forefront of artistic experimentation.

As the film reiterates, all this makes the brutal provincialization and cultural denudation of this great metropolis by the Shiv Sena and the sangh parivar all the more tragic. A little past the halfway point of the film we begin to see the descent of the city of Bombay into an ugly mis-labelled Mumbai. Whatever the happy ferment and celebration of the visual arts inside the mansion, outside the windows a very different story starts to unfold from the late 80s. From the first Ram Mandir agitations to the destruction of the Babri Masjid, followed by the Bombay bomb blasts of 1993 and the retaliatory anti-Muslim pogroms in the city, to the eventual take-over of the state and city by the Shiv Sena and the BJP-RSS, we can sense the dismantling of the idea of India that had flowered in the late 40s.

For any Marathi, Gujarati or Parsi free-thinking intellectual, the Marathi and Gujarati name, Mumbai, was synonymous with Bombay, the city into which the India of hope and inclusivity was distilled: the great urbs that was open to everybody, that challenged and nourished intellectual thought and creative endeavour. That Mumbai was never simply a Marathi city like Pune or Nagpur, just as it could never ever be just a Gujarati, Punjabi, Sindhi, Uttar Pradeshi or Tamilian city. In this dismantling of India, if the banning of Salman Rushdie’s The Satanic Verses was an early marker of the politics of dishonest expediency, various governments standing by and silently condoning the attacks on M.F. Husain was another.

Expediency and silence didn’t suit Kekoo and Khorshed who stood by their principles. During the Emergency they broke with their old friend, Husain, when he painted sycophantic portraits of Indira Gandhi. After the ’93 pogroms, Kekoo, who knew Bal Thackeray, went to see him to protest against the violence (“My boys could never have done that,” deadpanned Thackeray brazenly). While made with great love towards Khorshed and Kekoo, the film’s greatest strength is that it avoids hagiography. As we watch the old couple’s health deteriorate in parallel to the failing health of our democracy, perhaps the lesson for us viewers is that one should also avoid hagiography when speaking about our nation.

Speak up for yourself, art historian tells Indian art world