The miscreants hadn’t sought out Vidyasagar, all they had needed was a concrete head to roll 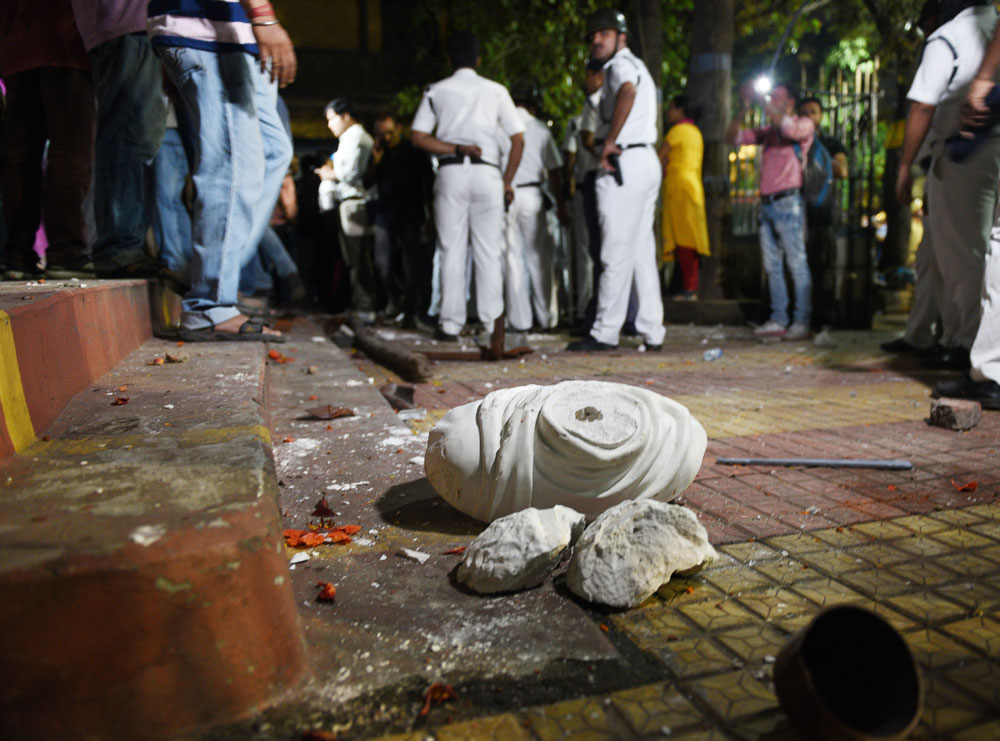 The bust of Ishwarchandra Vidyasagar that was vandalised during Amit Shah’s roadshow in Calcutta on on Tuesday, May 14, 2019. Those who destroyed it did not know that Tagore once said Vidyasagar's greatness lay in his determined, uncompromising humanism
Picture by Suman Ballav
Upala Sen   |   Published 19.05.19, 05:23 AM

In a state ruled by the lone woman chief minister of India, last week, some anti-socials thought nothing of vandalising the bust of Ishwarchandra Vidyasagar. The 19th century educationist reformer from Bengal might be famed for his vast scholarship, but it is his efforts towards women’s emancipation that are more singular than any boast about his knowledge. He gleaned evidence from Hindu scriptures to support his case for widow remarriage. Later, he solemnised such marriages at his own risk. And his efforts were not restricted to the higher castes alone. As he married off his own son to a child widow, he wrote to a friend: “I am not a mere slave to custom. What I think to be justified for the good of myself or of society, I will do.”

Though polygamy became illegal in India in 1956, it was Vidyasagar who began the crusade against it exactly a hundred years before that. He set up school after school across Bengal for girl students with money from his own not-very-deep pockets. As someone pointed out — even as the Trinamul and the Bharatiya Janata Party cried conspiracy and sabotage and every other party made hay — the miscreants hadn’t sought out Vidyasagar. All they had needed was a concrete head to roll.

They know not what they do

They didn’t know of the resistance he had braved from his own for his reformist endeavours. They wouldn’t know that it was said of him by one of his earliest biographers that he had “injured the Hindu religion through an excess of kindness and self reliance”. They did not know that Tagore once said of him that his greatness lay in neither his vidya or daya but “in a determined, uncompromising humanism which had made him look at the life of a women in a fundamentally distinctive way”. They would have had no clue that often enough, the poor Brahmin was fed up of his circle of bhadraloks. That, as historian Sumit Sarkar points out, in his later years he believed the country could improve only if the present breed of men were totally uprooted and human beings of a new kind planted. In all likelihood they were not aware that the last 18 years of his life he was so fed up of his ilk that he settled down among the Santhals. Had they known all this would they have stopped at smashing the glass case that housed the bust, or would they have proceeded to pulverize the dead man and all that he stood for?