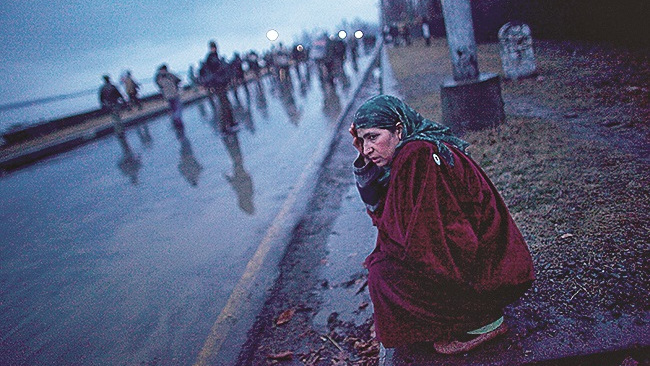 A Kashmiri muslim woman regains her composure as others retreat during a protest of the death of teenager Zahid Farooq on February 05, 2010 on the outskirts of Srinagar, Kashmir, India. Fresh protests erupted today fuelled by the death of of the second teenager in a week, 16 year old student Zahid Farooq. Police are still investigating the death, whilst relatives and friends blamed government forces.
Daniel Berehulak/Getty Images)
Tarushikha Sarvesh   |   Published 08.03.21, 12:34 AM

The binary of men as combatants and women as passive grievers is perhaps the most common projection of gendered realities in a conflict zone. Men are often seen as principal negotiators who make the difference when it comes to critical decisions on everyone’s behalf. Women’s participation, roles, risks, and their circumstances, on the other hand, get eclipsed in this binary.

Women in conflict zones are faced with intriguing circumstances with regard to their status, roles, expectations and vulnerabilities. In conflict zones like Kashmir, these realities compound other vulnerabilities for women. Although the lives of men and women are intricately linked, the pre-existing socio-cultural understanding and the masculinist nature of conflict increase women’s vulnerabilities. For instance, in Kashmir, frequent visits by security personnel to houses on tip-offs or even for routine enquiries stigmatize women. For women, these visits by security personnel represent a dangerous concoction of unbridled power and a hostile male gaze, complicating not just their present but also their future conditions. After their houses were raided, some families found it difficult to find marriage alliances for girls in their families as they were suspected to have been violated. Unrestrained power and the lack of accountability have led to the creation of the image of the armed forces as an adversary in the people’s consciousness. Interface between the people and the armed forces results in stigmatization. This is felt most strongly in the case of young women, widows and single mothers.

A comparison between the situations of young male and female pellet victims in Kashmir shows a stark difference in their realities. For the male victims, the lack of access to healthcare and being visible on the radar of the security apparatus are the most immediate threats, setting off layers of further victimization. These layers get compounded in the case of female victims, whose families fear that their present and future social relations would be damaged, resulting in their social and economic exclusion. A girl child from Shopian — she was 18 months old in 2018 when she was hit by pellets in her right eye — is a classic case that reveals how the complications are far more layered for the girl child and her family members than those faced by male pellet victims. Her parents do not wish anybody to know her name. They fear that this could impair her social relations in the future. Her father — a police constable who hardly gets to be at home on account of being a target of the Hizbul Mujahideen — has enforced long-term negative familial consequences on the girl child. This girl’s life projects the potential risks irrespective of one’s affiliation in a restive zone. Sides don’t matter in conflict zones; vulnerabilities do. People’s lives should be judged not by their perceived affiliations but on the basis of vulnerabilities, risks and marginalization. As such, an ecosystem facilitated by a holistic health infrastructure needs to be nurtured for a life away from suspicion and stigma. Psychological and physical health deteriorate when people don’t have faith in or the confidence to approach the healthcare system and other institutions out of fear of victimization through identification. Health is no longer a private matter in conflict zones. The turmoil of conflict creates the need for greater assistance while, simultaneously, restricting accessibility to the same.

Women’s choices and bargaining power become the worst casualties in conflict zones. The option of getting remarried after the loss or disappearance of their spouses or not remarrying is hardly a choice as it is governed by the potential vulnerabilities of a stigmatized life. This stigma gets magnified when women suffer at the hands of the armed forces. Today, even though several years have passed since the Kunan Poshpora outrage, the mother-daughter relationship in the region remains complicated. This is because the daughters are facing humiliation in college and in other public spheres for their mothers’ charges of being allegedly raped by the armed forces.The stigma has not been obliterated from social memory, straining intra as well as inter-generational relationships. The demand for accountability and responsive institutions needs to be kept alive. For this, women’s experiences should be looked at as separate from those of men. In the absence of such a framework, the complications of women’s lives are getting lost in the metanarrative of ‘the combatant versus the State’. A simplified understanding of these multi-layered experiences and their repercussions can cause deeper damages.

Women and men experience conflict differently due to differences in their culturally determined roles. The rampant displacement of women goes unnoticed. Destruction of houses, the loss of a spouse, being single or being a single mother, loss of jobs or property can lead to such displacement. This adds to the gender-role complications. Women’s identities have been reduced to half-widows, widows or mothers of disappeared children. This imagery excludes them from their claim on the role of active agents. Protests are the only means through which women transcend into being active agents. Yet, in the public imagination, they simply come across as bearers of loss.There is thus a need to view women as complete entities whose experiences of conflict are distinct from those of men. Their experiences must be part of any dialogic process of conflict-resolution. Women’s realities should be seen as integral to the process of strengthening accountability and law-making.

Women’s experiences are also a testament to complex vulnerabilities. Consider the women who came from Pakistan with their former militant husbands in 2010-2011 under the rehabilitation policy of the then Jammu and Kashmir government. Most of them live in Budgam, Baramulla and Srinagar. They are the ‘lost women’ with no citizenship rights or recognition. Even their disappearance goes unaddressed as they do not belong. Somiya Sadaf, hailing from Muzaffarabad and educated in India, who accompanied her husband to Batergam, found her citizenship challenged when she tried to contest the recent DDC elections from Drugmulla constituency. She is popular in the region because of her social and humanitarian work. The plight of women from Muzaffarabad should be seen as a humanitarian crisis; they can neither visit their native place, nor can they belong to their current place of residence due to the lack of documentation.

Conflict contributes to the precariousness of women’s socio-economic and political opportunities. Guilt in seeking government jobs as well as loss in businesses and dwindling economic support on account of conflict-related disturbances may deeply damage their positions in the long run. Any attempt to enforce citizenship will only erode people’s trust and diminish their opportunities to prosper. Enforced citizenship compounded by the lack of accountability turns citizens into detainees, with women’s lives revealing the worst forms of active and passive exclusion resembling the risks and invisibility of a trafficked life.

The author is Assistant Professor of Sociology, Advanced Centre for Women’s Studies, Aligarh Muslim University. This article emerges from the author’s ongoing research on lived experiences of exclusion in Kashmir and is funded by ICSSR under IMPRESS scheme.