Advertisement
Home / Opinion / In the idol workshop, Ganesha is a commodity on an assembly line

In the idol workshop, Ganesha is a commodity on an assembly line 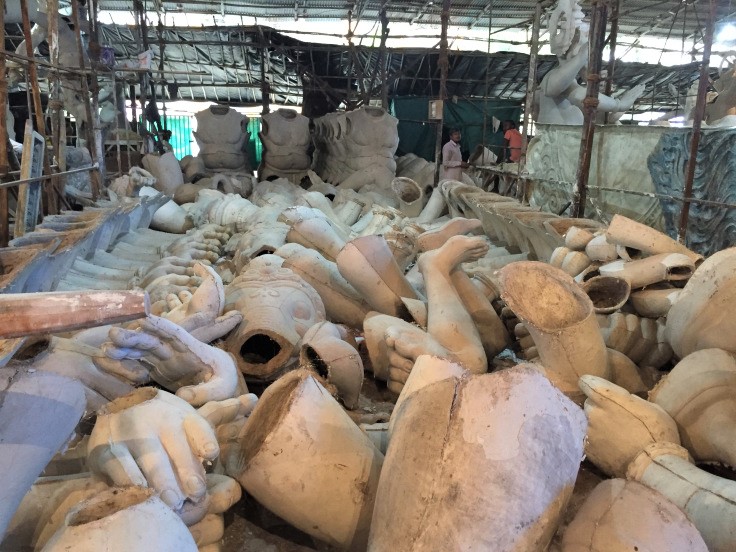 As in any factory, the kit of parts is made separately, and then assembled into the final product
Photo by Rajitha Gopinath
Rajitha Gopinath   |   Published 08.09.19, 06:40 PM

For Ganesha festivities this year, we decided to take the kids where all the action takes place: the Central Railway Loco Works in Lower Parel, near the Lalbaug flyover in the heart of Mumbai. This is one of several hubs where Ganapati idol are made, and there are others like it in Lalbaug, Parel and Chinchpokli. We enter what looks like a huge industrial shed of several thousand square metres, into the makeshift workshop of bamboos and metal sheets.

We walk past a line of statues in various stages of completion. Some idols are 25 feet tall. A few workers are getting ready for the morning shift. Several are migrants, who come to Mumbai just for this season. Afterwards, they return to their villages, or go elsewhere looking for work. According to one media report, these idol factories employ 1.5 lakh people, and generate as much as Rs 12 crore in revenue.

Work starts in July, that is, at least two months before the festival. A young worker tells us that nearly 25,000 idols are made at this workshop in Lower Parel alone. Our citizen journalism seems to bother him, and he clams up.

Standing there, I look at all the incomplete idols and wonder about the number of man-hours required to complete them. I assume there must be a chief sculptor, an old lanky fellow in dhoti-kurta and topi, commanding his workforce, with a series of assistants measuring off of a model sculpture with callipers and making diligent corrections. But in five minutes, the workings of the place and what makes the prolific output possible become clear to me.

All you need to make these gigantic statues is sacks of gypsum, some beaten coir and an FRP (fibre reinforced plastic) mould. That, and some average-level dexterity to screw the moulds shut. That's it. The magic lies in the FRP mould and a highly streamlined assembly line. As in any factory, the kit of parts is made separately, and then assembled into the final product. Every idol is a combination of these pieces: head, trunk, legs, arms, palms, and abdomen. Nothing is left to the sculptor’s imagination - not even the humble mouse. The design and assembly are flexible - for example, if you fit the palm facing up, you can place a modak in it, or you can have it face the front, as if showering blessings.

The mould for the body
Photo by Rajitha Gopinath

Every idol is a combination of head, trunk, legs, arms, palms, and abdomen
Photo by Rajitha Gopinath

A completed idol is hollow, and can weigh up to 1,000 kilos
Photo by Rajitha Gopinath

The idol is hollow, and can weigh anywhere up to 1,000 kilos. The moulds are cracked open and lined with a mixture of beaten coir dipped in a paste of gypsum and water. They are then closed like a sandwich, and the edges are screwed together. Further layers of the gypsum paste are added inside by hand, until the right thickness is achieved. The mould is left to dry for 15 to 20 minutes, while the worker takes up another mould and cleans its crevices. The first mould is then unscrewed, and voila - a leg! After all the parts are ready, they can be assembled to suit your preference.

Moulds are cracked open, lined with a mixture of beaten coir dipped in a paste of gypsum and water, closed up again
Photo by Rajitha Gopinath

After drying for 15 to 20 minutes, the mould is ready to be opened, and the part is ready for assembly
Photo by Rajitha Gopinath

The same kit of parts can be assembled in different ways. Nothing is left to the sculptor's imagination - not even Ganesha's humble mouse
Photo by Rajitha Gopinath

God here is a commodity, put together on an assembly line. Smaller statues cost around Rs 15,000, while the bigger ones could go up to Rs 1.25 lakh.

Next, the idols will be spray painted, and finishing touches added by hand. The paints and decorations being used give off a toxic smell. None of the workers have masks or gloves.

After ten days of festivities, the idols are immersed in the ocean or some other water body. One of my curious kids asks: 'What happens after you immerse them?'

'It stays there, in the water. The next day, the municipal authorities and NGO people remove it,' one of the workers explains.

On a blog written by an employee of the Pollution Control Board, Gunwant Joshi says that pollution is already at alarming levels. “Heavy metals like lead, cadmium and chrome from which these paints are made... leads to contamination of water bodies thereby affecting various fish and prawn species. Further, they may even reach humans via the food chain when we consume... seafood. High levels of... heavy metals can damage the heart, kidneys, liver, circulatory and central nervous system. The problem becomes more acute when the amount of input to these water bodies far exceeds their decomposition, dispersal and/or recycling capabilities.” The Maharashtra Pollution Control Board has recorded significant changes in the concentration of chemical pollutants after idol immersion, resulting in exposure that is many times higher than the safe limit. The problem is not going anywhere.

First there were amputated gods awaiting their limbs. Now there will be battered and soggy ones, waiting to be loaded into trucks and dumped in a landfill. All for ten days of merriment in between. Once we're past the threshold, we won’t be able to look the other way, saying we didn’t sign up for this.