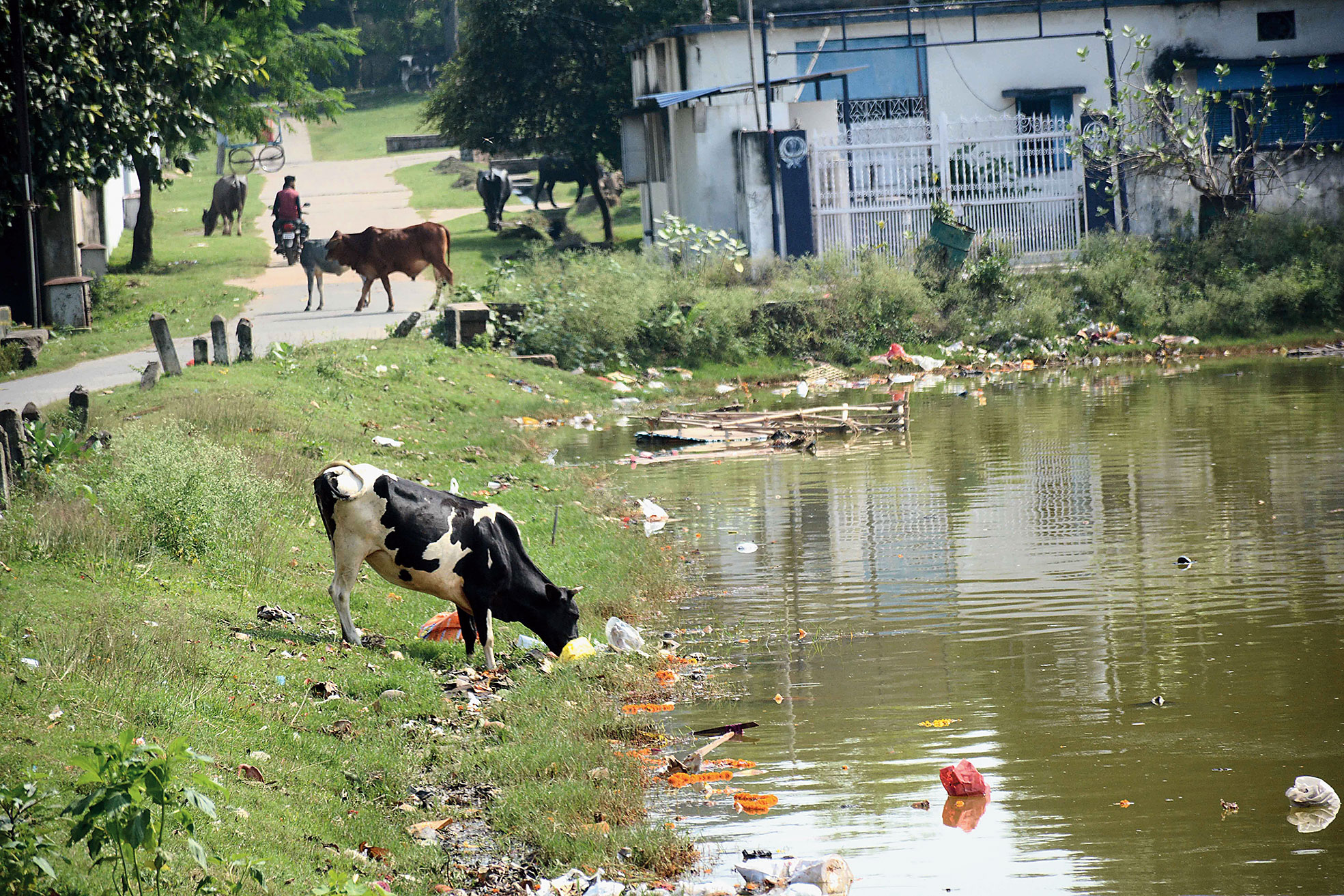 WHAT A MESS! Idol scaffoldings and puja paraphernalia float on the Tar Company Talab near Telco in Jamshedpur on Wednesday.
Bhola Prasad
Animesh Bisoee   |   Published 19.09.18, 09:42 PM

Plastic packets, thermocol waste and puja paraphernalia have choked the already dirty Tar Company Talab near Telco, making a mockery of the two-week long nationwide swachh campaign that kicked off from September 15.

The banks of the two-acre 90-year-old pond, maintained by Tata Steel subsidiary Indian Steel and Wire Products Limited (IS&WPL), normally stays littered with trash round the year dumped by residents living nearby.

“People from nearby residential areas and shops dump garbage in the water body regularly. With Ganesh and Vishwakarma Pujas over, idols and puja items have added to the woes,” said Santosh Kumar Shardul, a transporter and a resident of Telco who crosses the stretch regularly.

He said the water level of the pond, which used to be 10-12 feet, was now been reduced to below 5 feet because of garbage.

BJP youth wing member Rajiv Pandey, also a local resident, said they had informed the matter to Jamshedpur Durga Puja Kendriya Samiti, an outfit co-ordinating pujas and other major festivities in the city and its outskirts.

“We have informed the samiti so that they can pressure the administration to clean the water body before Durga Puja and Chhath. Otherwise, it would lead to difficulties for devotees,” said Pandey.

“We will hold a peace committee meeting for Durga puja later this month which would also be attended by officials of civic bodies and representatives of private companies maintaining water bodies. We will ask the firms to clean the water bodies before the festivals,” said Kumar.

IS&WP Limited senior executive Awtar Singh told The Telegraph that they would increase the workforce to clean the water body ahead of the festivals. “We already have a person who cleans the water body. But due to lack of civic discipline and immersion of idols, the pond has become dirty. We are aware of the problem and will ask the contractor to increase the number of personnel to clean the pond,” said Singh.