The Thin Edge | Boris Johnson and his grotesque fancy-dress party 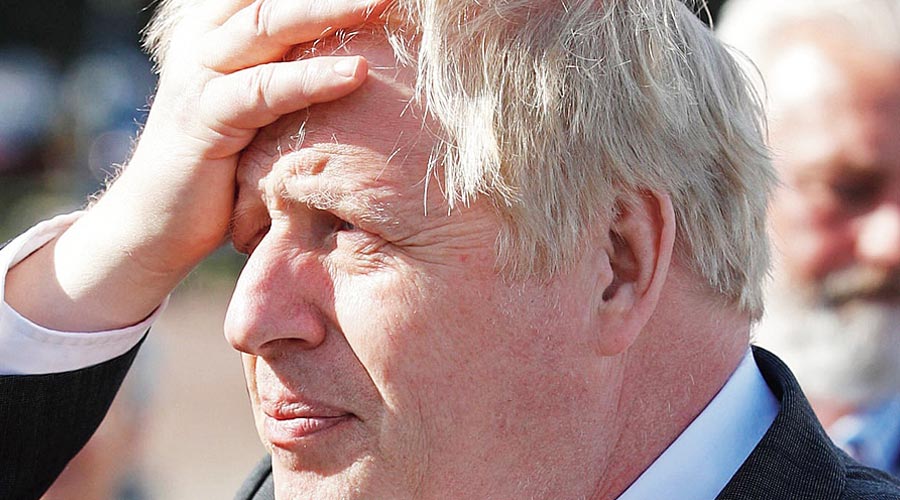 For those who haven’t been following the ongoing drama in the politics of the United Kingdom, here’s the basic storyline: after an initially botched response, where it ignored the seriousness of the Covid-19 virus, Boris Johnson’s government declared strict lockdown protocols for the whole country; as 2020 and 2021 unfolded, Britain witnessed, and suffered under, further incompetencies and the lack of concern from Johnson and his team; scandals to do with the government also began to emerge, including one where a huge contract for PPE suits for the National Health Service was allegedly given to a crony manufacturer; all the mistakes and misdemeanours of the prime minister and cabinet were put into the shade, however, when it came to light that parties might have been held at 10 Downing Street at the height of the lockdown, when ordinary people couldn’t even attend to dying loved ones much less meet each other for any small family gatherings. These substantial accusations of flagrant disregard for rules he had himself made for the rest of the country have now got Johnson teetering on the edge of the precipice, one from where he may be pushed over by his own Conservative Party MPs and Tory grandees.

Like many current counterparts in other countries, Johnson is famous for never knowingly speaking the truth. Like other prime ministers and presidents we know, Johnson has his own — typical — methods of avoiding answering hard questions; a favourite trick is what one might call the ‘chaff release’ method, named after the bunches of tiny aluminium or zinc strips warplanes release as decoys to electronically confuse missiles coming at them; in the case of people like Johnson and Donald Trump, this often involves doing something or making some outrageous statement that steals the headlines, taking media attention away from whichever critical questions people may be asking them. Facing impending defenestration from 10 Downing Street, under the cosh from the sharp questioning in Parliament by the leader of the Opposition, Keir Starmer, Johnson recently let fly with a counter-accusation at his tormentor.

Before he became leader of the Labour Party, Starmer had been Director of Public Prosecutions and head of the Crown Prosecution Service, the government department that prosecutes criminals in court. During his time in charge, around 2009, while he was overseeing around 900,000 cases, one sub-division of the CPS decided there was insufficient evidence to prosecute Jimmy Savile, a famous DJ and, by then, an octogenarian, for multiple accusations of child-sex abuse. Savile died soon after and a posthumous enquiry concluded that the lawyers in the sub-division could have handled the multiple cases differently. It was also very clear that Starmer was in no way responsible for the decision not to prosecute Savile. Nevertheless, unfounded posts by right-wing trolls accusing Starmer of this ‘failure’ began to spread on social media after he became leader of the Labour Party. Facing Starmer in a debate where he was catching the worst of it, Johnson flailed out with this patently false slur.

What is interesting is what happens after Johnson repeats this calumny. Ministers in his cabinet distance themselves from Johnson over the matter, and with alacrity. Other MPs in Johnson’s party ask him to apologize and withdraw the comments. His head of policy resigns, saying in her resignation letter that “it is so desperately sad that you let yourself down by making this scurrilous accusation against the leader of the opposition.” A lawyer who represented Savile’s victims tells the BBC that Johnson’s accusation was “fundamentally baseless”. Johnson himself releases further decoys from his mouth, claiming he never meant to accuse Starmer personally.

Krishnan Guru-Murthy, one of Britain’s seniormost television anchors, confronts Nadine Dorries, secretary for culture and one of the few remaining Johnson loyalists in the cabinet, and asks her bluntly: “How can you have a Prime Minister just repeating fake news like that?” Dorries’s response is to shuffle sideways, saying first that she knows nothing about Starmer’s background, second, reaching for whataboutery, that Starmer himself also said things that were inappropriate and, third, that she only has Guru-Murthy’s word about Starmer’s record. None of this washes with the TV journalist. “He’s just repeating a meme!” says Guru-Murthy before adding, “He [Johnson] said things that were untrue, he misled the House today!”

It’s clear that Johnson’s government is in a complete shambles, generously self-garnished with disgrace and vicious mendacity. It’s clear that the British prime minister is incompetent, completely indifferent to the fate of the poorest people under his care as he bends over backwards to serve his rich friends, that he is completely narcissistic, and willing to blow apart any principle or truth that obstructs his continuation in power. This much is closely comparable to what we are facing in India today.

Whether they stem from geographical or demographic scale, from history or culture, what should concern us are the differences in what can and can’t happen from this point on. For instance, it’s unlikely that the Conservative Party or the Tory press will allow any kind of a personality cult to encrust around Johnson. Next, it’s clear from the outrage at the revelations about the Downing Street parties that the abhorrence for certain double standards cuts across class and political affiliation — think of it as an instance of queue-jumping triggering if not a revolution then at least a palace coup. Thirdly, there still seems to be some kind of weird half-life left in the notion of ‘fair play’, at least for white men of a certain class or above — Johnson’s ill-judged attack on Starmer may actually gain the Labour leader vote-catching sympathy among the wavering borderline voters who voted Tory last time. As the suffering audience of our own, ongoing grotesque fancy-dress party, we will have to arrive at our own route to ending the mehfil of the few.