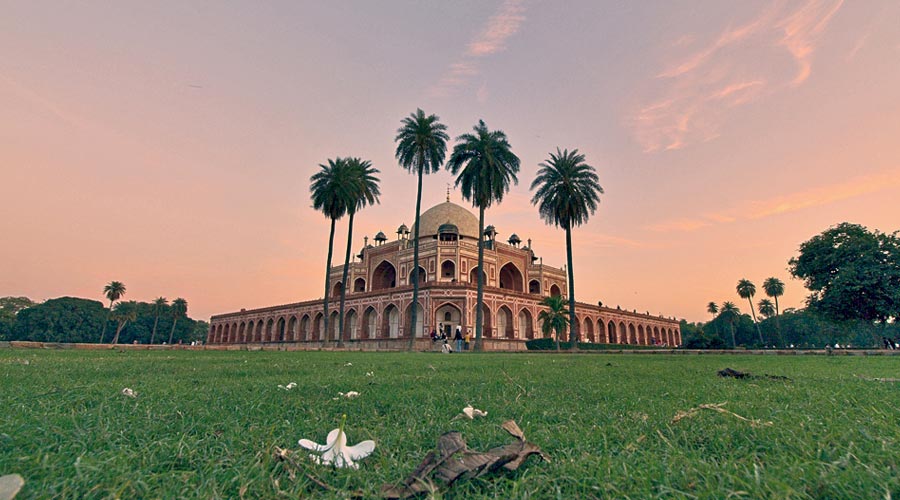 I have visited Humayun’s tomb several times, seeing it transform from its earlier decrepitude to the beautiful, sensitively restored monument-space it is today. The tomb was one of my favourite old buildings even before the restoration — something about its clean lines, its proportions that manage to effortlessly mix intimacy with graceful grandeur, the restrained colour scheme of red sandstone interrupted by sparely deployed white marble, all of it has always nourished me more than the overwhelming, in-your-face beauty of many other Indian mausoleums and temples. With the restoration now complete, the tomb itself and the ancillary buildings have also been given a context of green, well-tended gardens, which allow the other venerable monuments on the site — the trees and foliage — their own presence, their own visual Kabuki with the man-made masonry.

Recently, I went to see the tomb again, but this time with architect friends who were visiting the city. Like me, this couple had also visited earlier but they had not seen the finished restoration. Walking around the space with two pairs of somewhat differently-trained eyes was a lesson. Things I’d never noticed were pointed out: the exact alignment between the succeeding gateways; the ‘reveal’ as you cross the final threshold and can actually see the whole structure; and how different it was from what happens at, say, the Taj Mahal. One of the friends spoke about how the white dome interacts with the sky, glowing sharply in the chiaroscuro of dawn and dusk, almost disappearing in muted top light, coming back into round vividity against dark clouds. Examined minutely were the almost invisible rain channels worked into the stone as well as the slope of the platform to coax away the monsoon water, none of which I’d noticed before. Explained was the way the sandstone slabs were placed with minimum mortar and the fact that they fronted a stuffing of lime and stone rubble.

To the east of the tomb stretched a tumult of trees, almost hiding the nearby gurdwara, with the railway line faint in the distance, while the north side had the view of the attendant water aqueducts and the lines of the water channels that must have inspired Louis Kahn and Luis Barragán in their design of the Salk Institute in California.

The spring morning light changed around us as groups of youngsters pranced up and down the stairs and sashayed across the flagstone, moving in unspoken group-selfie choreography, freezing from time to time without tangible signal into Instagram-mudras. Inside the shadowy central chamber, boisterous groups of young men yelled and blew klaxon whistles, bathing in the amazing acoustics before guards chased them away. On the grounds, on the benches under the quartet of pilkhan trees, a couple sat in chaste-canoodle mode while schoolgirls prowled around politely, looking for victims to interview for their class assignment. The austere beauty of the building, the lush, basant authority of the trees and the celebratory clusters of young people together made a whole that transcended architecture, arbour and holiday ardour.

The friends I accompanied are part of a loose movement of Indian architects drawing notice and accolades because of their alternative approach to building for our times. This approach is defined by several things; a deep study of local grammar and traditions that inform any new design; a rigorous examination of the environmental impact of any new building, with innovative solutions to cooling and energy consumption becoming central to a project from the very beginning of conceptualization; an aim for genuine, non-grandiose beauty in the final design, all of this entirely subservient to who will use the building and how they will experience it in daily use. This movement is not confined just to India or to the subcontinent. A few days after my friends’ visit, came the welcome news that Diébédo Francis Kéré of Burkina Faso and Germany had won the Pritzker Prize, the most prestigious international recognition for architectural work.

This is not the place to detail Kéré’s work but what is important to note is that the architect has consistently built across some of the most deprived areas of Africa, working with local people, using the simplest local materials in the most inventive ways to produce buildings and projects which pair stunning design with amazing utility. Thus, a local school building may be made from compacted clay, with its ceiling and walls designed to cool the classrooms without any air-conditioning or glass cladding; a lighting scheme in another building may involve embedding into a ceiling traditional pots sliced into half; a Parliament building for Benin may echo a palaver tree under which people traditionally gather for meetings, while a proposed Parliament for Burkina Faso may be in the form of a ziggurat where the assembly is underground below a terraced public park, where the people are literally above the legislators. “I want people to take ownership over the parliament building,” Kéré has said and in that one sentence perhaps lies the core of his philosophy.

A few minutes drive from Humayun’s tomb brings you to the tin-sheet canyons that enclose the biggest heist of urban commons in the history of independent India. Here, at the Central Vista, the most pompously authoritarian, most ecologically damaging, most backward-looking glass and concrete office blocks, the prime minister’s mansion and the fortress-like new Parliament building are being constructed for a huge amount of public money at a time of grim scarcity. This area, for decades one of the few places where even the poorest of the city could walk in greenery, will now become a high-security showpiece for the bloated egos of those in power. In a city full of beautiful mausoleums, these future tombs for those ruling over us today will not stand any test or comparison. But meanwhile, whether in Kutch or Koudougou, in Dakar or Dhaka, human ingenuity, generosity and aesthetic grace will continue to produce architecture that re-affirms life and joy.