THE THIN EDGE | Hungary is an example of democracy’s nightmare 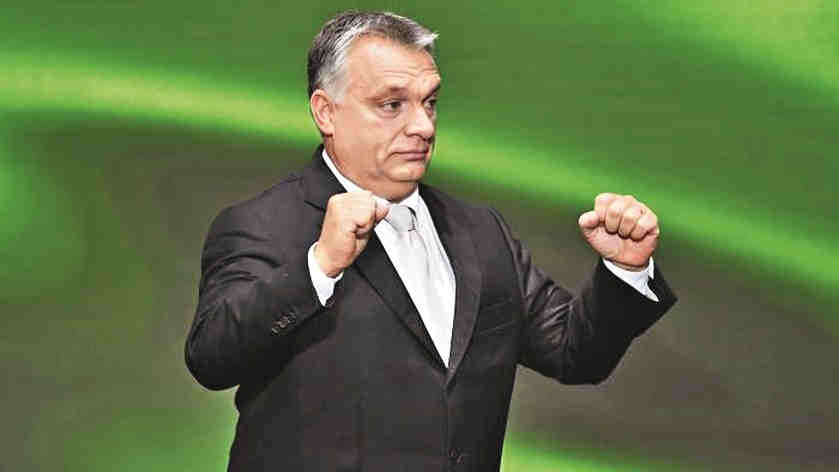 The dictionary defines schadenfreude quite simply as the ‘satisfaction or pleasure felt at someone else’s misfortune’. This is so typical a desi emotion that it always comes as a shock that other people in other cultures also feel this; one is sure that the first human being to feel vicious satisfaction at someone else’s bad luck must have been from this soil; that we birthed the feeling but the Germans managed to name it first is, to say the least, a bit galling. Be that as it may, the other day I found myself bathing in schadenfreude. The reason was a recent article by Nick Cohen in The Guardian in which the well-known leftist commentator describes the wretched situation in Hungary.

From all reports, it is not an exaggeration to say that Hungary’s current prime minister, Viktor Orbán, is actually a de facto dictator. It seems Orbán began by posing as a liberal back in the 1990s when liberalism seemed to be a good ticket to power. Perhaps he had some banal slogan which, translated from Hungarian, might have read ‘Together with everybody, Progress for everybody’, perhaps he had some other formulaic lies that he peddled loudly, but in the end they got him elected as prime minister. As soon as he won the elections, Orbán seems to have assiduously set about dismantling the very democracy that brought him to power. Sitting as we do in a truly robust democracy in a Republic in good health, one can only feel pity for this erstwhile ‘second world’ nation. Tingeing our pity towards this country (which is now a part of the elite and privileged European Union) might be sniggers of superiority, but we must rein these in. The Hungarians have been undergoing things we just cannot begin to imagine. “As soon as Fidesz [Orbán’s party] won... it began rigging the system,” writes Cohen. For instance, it introduced the “novel concept of ‘winner compensation’ that awarded the victorious party with extra votes.” Reading this, the Indian mind boggles. What next in the spectrum of brazen corruption? Bringing into law some sort of absurd electoral funding system which allows the ruling party to receive unlimited anonymous funds from anywhere in the world? Cohen continues to enumerate the horrors that to us might seem foreign and exotic: “State capture has followed. Bureaucrats and police and military officers know their position depends on not crossing the ruling party.” One must avoid any smugness while reading this in a country where democracy is protected by a finely calibrated system of checks and balances. Difficult though it might be, just try and imagine a pretend-democracy where the investigative agencies have become hunting dogs for their political masters, where the equivalents of our CBI, NIA, ED and NCB shove aside the work they should actually be doing and concentrate solely on concocting laughably false cases against opponents of the regime, where raids are launched in revenge for criticism or perfectly legal democratic activism that challenges the ruling cabal, where innocent people are put away in jail with the enthusiastic co-operation of a debased lower judiciary.

Moving on to another crucial prong of Orbán’s dictatorial control, Cohen points out that “the Hungarian media are the most prostituted in Europe.” Besides controlling the broadcasting services, the State “relies on a network of Orbán-supporting oligarchs, who put 500 media outlets under the editorial control of a state foundation.” Furthermore, “[t]he simple but effective tactic of rewarding servile journalism with taxpayer-funded advertising revenue mops up most of the rest.” The idea of a largely sold-out media jumping up and down at the government’s bidding, TV channels and other outlets being mostly controlled by the regime’s favourite billionaires, might be hard for us to grasp here in India but we must try and find some sympathy for the victims of this relentless tsunami of manipulation — the people of Hungary.

Adding to this array of despotic instruments and measures is the business of Orbán-ji promoting various racist and ethnic conspiracy theories, raising the fear of immigrants entering the country and destroying its white, Christian character, perhaps a bit like termites destroying a house.

There is, of course, opposition to Orbán-ji’s dictatorial manoeuvres from all sorts of quarters but it is hard going at the moment. For example, the regime has attacked the Central European University based in Budapest. As Cohen writes: “Its academics and students are nowhere to be seen because Orbán drove them into exile in Vienna rather than permit the existence of a centre for independent thought.”

Seen from our vantage point, with a certain distance in both chronology and geography, we can conclude that the eleven-odd years of Orbán’s rule have been disastrous for Hungary, a country which even managed to navigate the decades of its membership of the Warsaw Pact to achieve a degree of social freedom and intellectual vibrancy that set it apart from the other vassal states of the Soviet Union. Looking back, we can now see the deployment of the contemporary dictatorial playbook, also executed with variations in other countries across the globe, whether in nearby Turkey or the faraway Philippines, whether in Putin’s Russia or Donald Trump’s US. The graph is, by now, as familiar as a classic: the winning of power through more-or-less democratic elections, the immediate single-minded subverting of democratic institutions and checks and balances, the constant loading of dice, the cold-blooded hollowing out of law enforcement, security agencies and the military, the choreographed trolling and the relentless unlawful attacks on all Opposition, the uprooting of independent media and educational institutions that can challenge the despotic powers, the typical fascist programme of keeping a public fearful and uneasy through the spectre of manufactured outsiders and enemies — all of it. Depending on which country you live in, you can either fight any schadenfreude that rises or try and coin a new word that describes the feeling you have when another’s misfortune is great but not quite as dire and deep as your own.