The Indian Republic: then and now 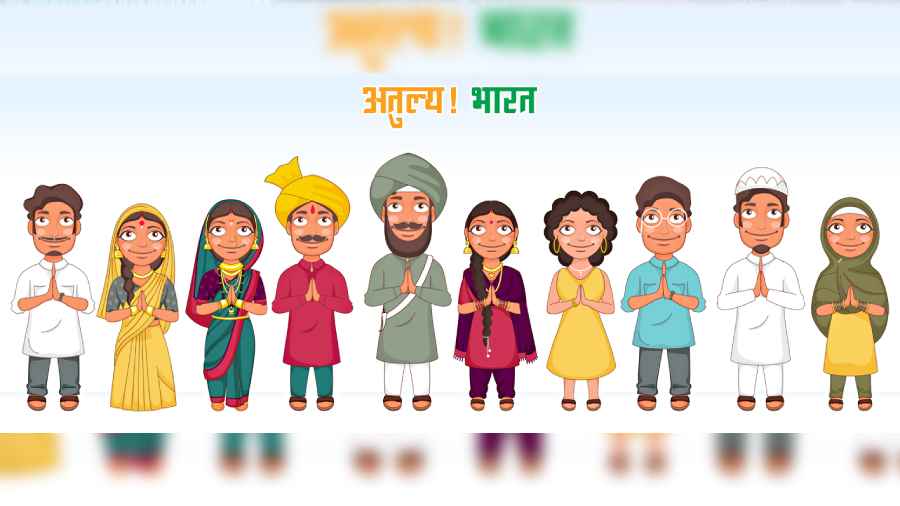 In my childhood, it was possible for children from all sections of society to get free, or almost free, education.
Sourced by The Telegraph
G.N. Devy   |   Published 11.05.22, 03:07 AM

The year in which India became a Republic — 1950 — was the year of my birth, a coincidence willed neither by the Republic nor me. The small town — more a village than a town — where I was born was located in the hills in western Maharashtra. Three centuries before my time, the lush green hills and rugged mountains surrounding it had heard the horse hooves and footfalls of men inspired by Shivaji’s idea of ‘swarajya’. Barely forty miles east of my village was Pune, where eight decades before my birth Mahatma Jyotiba Phule had ignited the minds of a whole generation with the ideas of truth and rationality. It was Pune where Mahatma Gandhi was kept in prison because he had given the call for the ‘Quit India’ movement and where his co-prisoner, Kasturba, breathed her last. Just twenty three years before my birth, Babasaheb Ambedkar had mobilized the Chavdar Talab satyagraha at Mahad, some 25 miles from my village as the crow flies. Several young persons from my area had become martyrs for India’s freedom in the decade preceding my birth. When the Partition tragedy came, some persons from Sindh migrated to my town and were offered shelter. When Gandhi was assassinated, the Brahmins, who feared a backlash, were given safe-stay by their large, joint-family neighbours. Hindus, Muslims as well as different castes lived in the small town as an extended single society. There were personal enmity and friction among neighbours, but there was no disrespect to other religions. There was anger, but hatred was rare. When the republic was born, the town could grasp the spirit on which it was built. People in the town had not read the Constitution, as there was hardly anybody there who understood English; but they had seen Ambedkar and heard his words. Therefore, the people quickly grasped the spirit of the Constitution. Previously, my town had a raja — a chhota raja if you like — as it was listed in official colonial records. The rule of the chhota raja had been over since the Bombay Presidency Assembly came into existence. People quickly took to the grammar of elections. They understood what a people’s representative means. My little town was perhaps the microcosm of India with its seven lakh villages.

Several decades later, I moved to Gujarat for work. I arrived there when the sepia-toned photographs of Gandhi, Azad, Patel and Nehru had started to fade in people’s memory. By then, corruption, commercialization, communalism and casteism had taken a firm hold of India’s mind. Communal riots around festival processions had become the order of the day. Police encounters — fake or faithful — were no longer seen as shocking. People had started choosing to reside in closed, gated colonies. Nuclear families, idealized as a photo-image of happiness, decked with material comfort and worldly success, had, in their minds, an inexplicable hatred. People stopped being angry with what was wrong in society, but were constantly in a mood of hatred towards smaller communities and the poorer sections. It was natural that my thoughts went back to my tiny, illiterate town inhabited by people without any significant material means. And it was not just nostalgia, it was also an attempt at sketching the biography of the Republic. Here is what I thought.

In my childhood, it was possible for children from all sections of society to get free, or almost free, education. It is true that there were not enough schools and colleges for all, but the ones that were there were available even for lower-middle-class students. Now, in the twenty-first century, there are schools, colleges and universities of all kinds — public and private, Indian and overseas — and, yet, education has become prohibitively costly for most families. In my mid-twentieth-century village, doctors were few and mostly general practitioners. Specialization was not heard of. In the city of the twenty-first century, doctors have acquired super-specializations. However, the costs of consultation, treatment and medicines are beyond the means of most middle-class families unless they have secured themselves through health insurance. In my last-century village, most houses were built of mud and covered with leaky roofs. In the twenty-first Indian city, the houses are made of sturdy steel and concrete with an amazing range of tiles and filled with fancy gadgets. However, the neighbours are mostly of a single religion; in many cases, of a single caste as well. In my town, garbage collection by the town council was random. Yet, the safai staff was employed by the council. In the twenty-first century, the city council has sold out the function to a private company. It is the same with drinking water. People pay taxes to the city council and, at the same time, they also pay charges to the private company. When India became a Republic, the roads, rivers, hills and seashores belonged to the government. In the new model, they belong to private players. Complaints about school, medicine, water, power, roads, open spaces et al, when they are made, have to be recorded on a machine-managed telephone number and the conversation rarely leads to problem-solving. In the little town, there was a small public library set up by the raja so that children could read and get to know about the world. In the twenty-first-century Gujarat, there are digital and plastic-flex hoardings with larger than-life photographs of a leader: their main job is to conceal rather than reveal facts. In today’s model of society, love for people from another religion is seen as loyalty to another country. During my time in Gujarat, whenever I travelled to other states, people in those states used to tell me how much they admire the Gujarat Model. My telling them that not all is well in Gujarat, that the adivasis are still kept far off from their legitimate rights and entitlements, the scheduled castes still bear the brunt of caste prejudice, and Muslims are victims of an incurable hatred, are quickly disregarded as an ‘opinion’. There are few takers for my pleading. Later, that model came to rule India and started patting its back as the ‘Rashtra Nirman Model’.

Today, in the 75th year of Independence, it is time for us to think why and how we have moved so far from the spirit of the Republic. Why has the gap between the poor and the rich become unbridgeable? Why has social harmony hit rock bottom? Why, despite material prosperity, is the middle class brimming with hatred? Why is the dream of making India a great country turning the hearts and minds of its people ‘small’? As we get ready to celebrate Independence and the Republic, it is time to figure out whether there is a radical dichotomy between the spirit on which the Republic and the Constitution were founded and the spirit on which the Rashtra Nirman Model is based. Born in the year in which the Republic was born, I say with humility that I have learnt from the people of India over the last seven decades that a country can become great only when its people learn the virtues of large-heartedness, compassion, co-existence and respect for others. Respect for the Constitution, which is the mother of freedom and equality before law, and for a person’s dignity for every Indian will be the touchstone for one’s love for India. It would not be an overstatement to say that as we recall the freedom struggle, India has to choose between the Constitution and another model that has been busy subverting it.