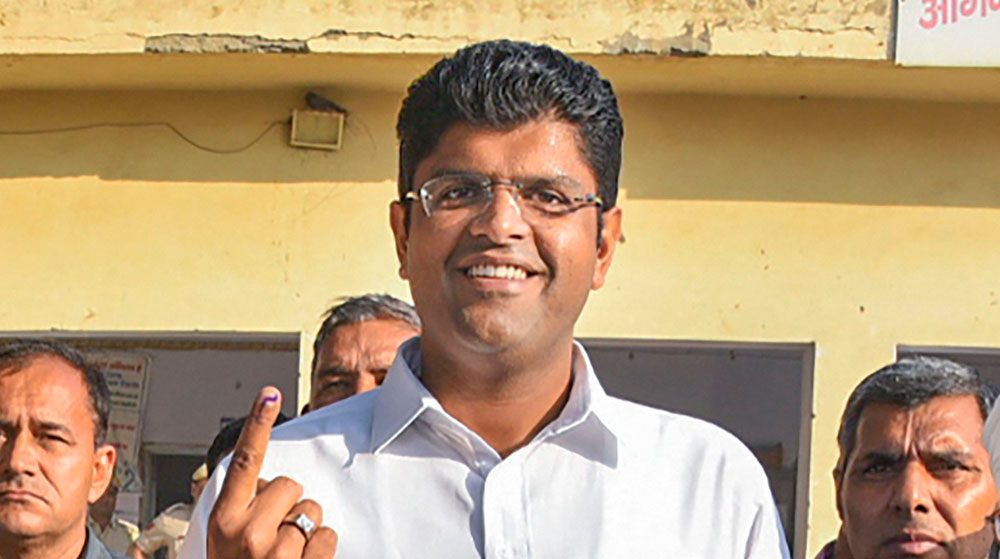 The fractured mandate in Haryana has bolstered the Dushyant Chautala-led Jannayak Janata Party's leverage on the contenders for power
(PTI photo)
The Editorial Board   |   Published 24.10.19, 09:41 PM

The poll pundit proposes; but it is the wise aam aadmi who disposes. This could indeed be one of the most important lessons that can be drawn by experts and pollsters from this round of assembly elections in the two states of Maharashtra and Haryana. The elections in these two states, the pundits had predicted, would be a cakewalk for the Bharatiya Janata Party, which, they believed, would return to power with a thumping mandate. But the results must have come as a disappointment for Narendra Modi and his party. In Maharashtra, the BJP has not exactly crushed the Opposition as was expected. In fact, the Nationalist Congress Party and even the Congress — depleted by defections and lacklustre leadership — have managed to put up a fight. Haryana would deepen Mr Modi’s frown further. The Congress has performed beyond expectations, as has Dushyant Chautala’s Jannayak Janata Party. The fractured mandate has bolstered the JJP’s leverage on the contenders for power. The outcome would come as a bit of a shock for the BJP, given its commanding performance in the Lok Sabha polls that were held only a few months ago. The Congress may have received a shot in the arm but its rank and file have reasons to believe that the result, especially in Haryana, could have been different had the central leadership invested greater energy in the campaign.

Broadly speaking, the results reiterate some old truths about Indian politics. The federal spirit continues to thrive in spite of the strain, pushing electorates to take into consideration different factors while airing their choices for parliamentary and assembly polls. Adverse local conditions — such as the agrarian distress in Maharashtra — may have brought some wind to the Opposition’s sails. Hearteningly, the Common Man, wisened by years of experience, chose to prioritize a tottering economy over the rhetoric of shrill nationalism. Mr Modi, who based his campaigns exclusively on the abrogation of Article 370, should take note of this mood. India’s deepening economic troubles, if they are allowed to fester, could well extract a political price from the BJP. Finally, the polls have also dismantled the myth of political invincibility. The ruling BJP has suffered a hiccup; the Opposition has been rejuvenated somewhat. This can only bode well for balance in a democracy.