The upcoming US presidential election has global stakes 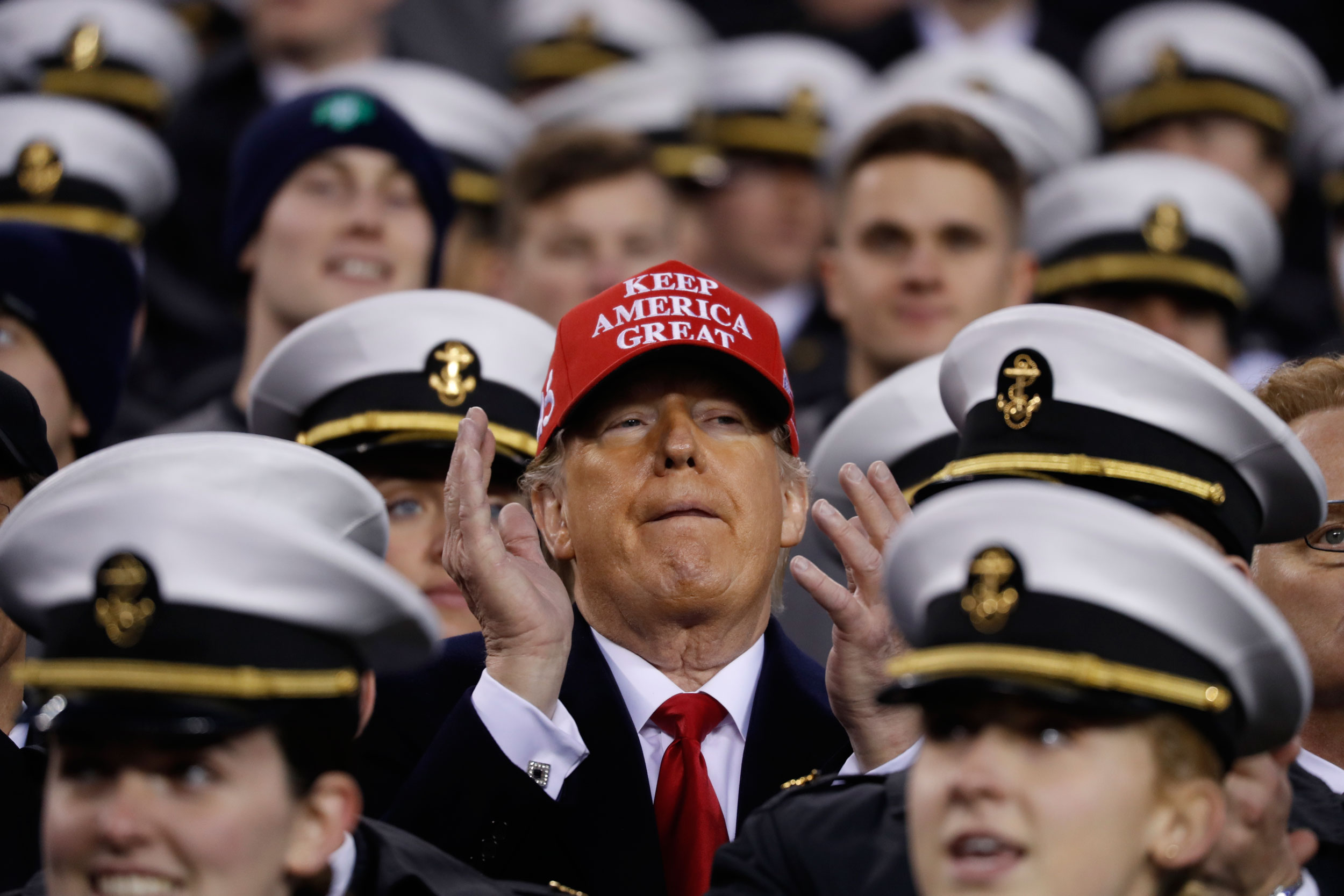 US President Donald Trump stands with the US Navy midshipmen before the start of an NCAA college football game between the Army and the Navy, on December 14, 2019, in Philadelphia. Trump faces little challenge to his re-nomination in the Republican Party.
(AP)
Luv Puri   |     |   Published 15.12.19, 06:33 PM

Less than eleven months remain for the 2020 presidential elections in the United States of America. The campaign is attracting global attention and the stakes are unprecedented. The US is around one-fifth of the world’s total gross domestic product and it continues to leave a huge imprint on international peace and security issues.

President Donald Trump has established new conventions in the US’s engagement with the global community. His alleged solicitation of the Ukrainian government to interfere in the US presidential elections, using American aid to that country as a leverage in this regard, is just one example. This has triggered an impeachment process Less than eleven months remain for the 2020 presidential elections in the United States of America. The campaign is attracting global attention and the stakes are unprecedented. The US is around one-fifth of the world’s total gross domestic product and it continues to leave a huge imprint on international peace and security issues.although it would require two-thirds’ support in the Senate which is highly unlikely because of the Republican majority. Trump faces little challenge to his re-nomination in the Republican Party. The suspense is with respect to the ongoing primaries campaign of the Democratic Party. It is hard to guess which contestant has an edge at this stage. However, some of the issues discussed so far within the primaries campaign are of direct relevance to the global audience.

First and foremost, the issue of inequality has acquired a greater resonance within the Democratic Party. In the past few decades, the default positions of the Democrats and the Republicans have held on corporate and income tax rates. When in power, the Democrats increase tax rates. The Republicans lower them when they are the incumbents. Within the US, where the median age is around 38 years, millennials and super millennials have a particular interest in the issue.

Senator Elizabeth Warren along with Senator Bernie Sanders — both are contestants — have pitched for a structural change to corporate America. Other rivals, such as the former vice-president, Joe Biden, and Peter Buttigieg have not been that vociferous on these issues, but their campaigns are expected to be sensitized by them. This issue is resonating across the world as within most countries the gap between the ultra-rich and everyone else remains high. This gap is expanding in lower-middle and upper-middle income countries in particular.

Another matter of prime interest will be the narrative on climate change. Trump intends to withdraw the US from the Paris climate agreement. All major Democratic contestants are committed to the US rejoining the same, and some of them are quite familiar with the nuances of various international initiatives. One of the contestants and the former mayor of New York City, Mike Bloomberg, attended the recent United Nations Climate Change Conference (COP25) in Madrid. He had been the United Nations secretary-general’s special envoy for climate action and has stated that “the next U.S. president should halt fossil fuel subsidies altogether.”

Connected to the topic of inequality is the disproportionate wealth and unregulated power acquired by technological firms such as Facebook, Microsoft and Google. Candidates like Warren have called for breaking up some of these tech giants. This is coupled with concerns about data privacy, hate speech and the use of such platforms to spread misinformation. In countries like India and Myanmar, the misinformation spread on some of these technological platforms has led to mob attacks on individuals or on minorities as well as social unrest leading to a loss of human life. Within the US, in the 2016 elections, Facebook’s data were instrumentalized by the Republican Party through the UK-based firm, Cambridge Analytica.

The stance of the contestants on peace and security will be closely watched by the international community. Approximately 28 per cent of the UN peacekeeping budget comes from the US. The scale of its contribution can be gauged from the fact that the liquidity crisis of the UN in the Ocober-November period was primarily due to non-payment of the US’s dues. In December, once the US paid $533 million owed for dues in 2018, the immediate crisis was over. Trump and his advisers have consistently attacked Nato countries “for not paying their fair share as the US pays about twice as much as other Nato member nations”. He has also threatened to revise treaties with Japan that were signed after the Japanese surrender that commit the US to defend Japan.

In terms of bilateral engagements, rapprochement with Cuba and Iran were the two much-touted foreign policy successes of Barack Obama. On Cuba, bowing to the influential Cuban American vote bank in the swing state of Florida, Trump reversed some of Obama’s policy initiatives. He reinstated the prohibitions on commerce with businesses owned by the Cuban military and security services and a ban on individual travel to Cuba. This means little as there are provisions to circumvent the ban. To the consternation of his European allies, he terminated US’s participation in the Joint Comprehensive Plan of Action in 2018, popularly known as the Iran nuclear deal, and has imposed “maximum pressure” sanctions on Iran. Trump withdrew troops from Syria. He wanted to do the same in Afghanistan. But, after initial proactiveness, he dropped the plan because of the ground realities. Some former foreign policy professionals have voiced their concerns in both cases. If one follows the template of the last Democratic Party president, the approach of the potential Democratic presidential nominee will be rooted in avoiding meddling in regional and sectarian disputes.

Lastly, the issue of economic trade is where Trump has been the most vocal during his campaign and his term as president. He has executed the protectionist pitch of his campaign to guide his policies with the main premise being bringing back manufacturing jobs to the US. In response, China has accelerated the move of several China-based manufacturing units to neighbouring countries in Southeast Asia to circumvent the tariff imposed on Chinese-made goods. Within the US, Trump’s core base in the agricultural-dominant economies of the South is facing the direct brunt of his protectionist policy that led to a trade war with China. In retaliation to the imposition of high tariffs on Chinese goods, China has stopped the import of corn, soyabeans and other commodities from southern states like South Carolina. After an escalating trade war of over two years, a preliminary trade deal may help in reversing some of the negative trends as China has agreed to buy more US agricultural products. The US has agreed to reduce tariffs on Chinese imports.

On many of the trade related issues, the impulse of the Democrats is no different from that of the Republicans, particularly on China, owing to their impact on their blue-collar bases. The return of manufacturing jobs to the US is a priority for both parties in some of the swing states. What will be interesting to watch in this regard would be the stance of the Democratic candidates on the Trans-Pacific Partnership, which was Obama’s key project. During the 2016 elections, the TPP faced flak from both Republican as well as some Democratic candidates, including Sanders. Unsurprisingly, Trump withdrew the US from the TPP in 2017. At a time when a new trade pact, the Regional Comprehensive Economic Partnership, whose leading member is China, is on the anvil, the apparent failure of protectionist policies and the danger of the US economy losing out to other global initiatives may force the leadership of the Democrats to consider moderating its opposition to the TPP.

Explained: how the US impeachment process works