Devotion is a desperately competitive business 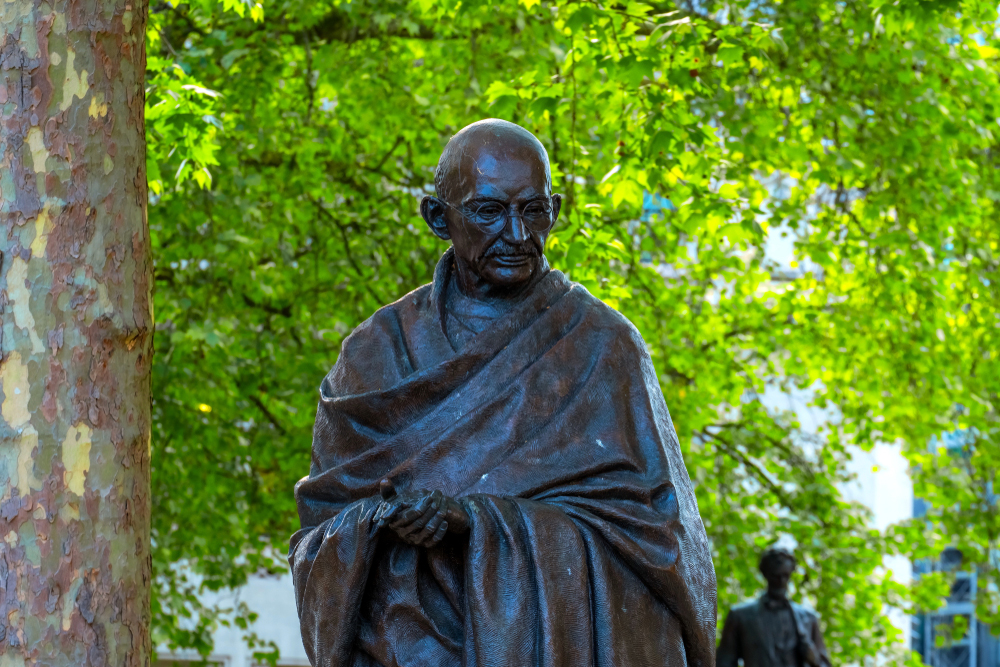 Harold Wilson, Britain’s prime minister in the 1960s, would not utter a single word for the record when Fredda Brilliant’s statue of Gandhi was unveiled in London’s Tavistock Square. Since NRIs were not politically significant then, it was assumed he reckoned anything he said would be wasted breath
(Shutterstock)
Sunanda K. Datta-Ray   |   Published 01.11.19, 09:15 PM

Gandhi is up for grabs. Amit Shah and Narendra Modi are not the only people who need a universally respected icon of inclusiveness. Controversial plans for a nine-foot bronze statue of the Mahatma outside Manchester Cathedral speak of other needs, as do the fierce objections of the so-called Decolonise Network at the University of Manchester, which accuses Gandhi of “anti-black racism and complicity in the British Empire’s actions in Africa”.

None of this has much bearing on who Mohandas Karamchand Gandhi really was, what he tried to achieve, and how far he succeeded in his self-appointed mission. It has everything to do with the perceptions and requirements of those who love or hate the myth into which he has been transformed. The proposed statue doesn’t celebrate the British conception of Gandhi either, although it might exploit it to promote the sponsor, the Shrimad Rajchandra Mission Dharampur. Since the mission’s website makes it sound devotional to the point of idolatry, it might seek a Western niche for its folk Hinduism. A less innocent explanation for its initiative is that “Gandhi is used as a propaganda tool to cover up human rights abuses by the current Indian government under Modi, which is engaging in an effort to erect Gandhi statues globally to create an image of India as an anti-imperialist state.” Objecting, the Indian Society of Manchester falls back on the conventional view of Gandhi as “a symbol of peace, non-violence, anti-colonialism, resistance and resilience”.

This is not the first time that man-worship and the addiction to graven images have dragged Gandhi into controversy. His first statue, planned appropriately enough for London’s poorer East End where he stayed in 1931, never happened. Thirty-seven years later, Harold Wilson, then Britain’s prime minister, flatly refused pleas to utter a single word for the record when Fredda Brilliant’s statue of a cross-legged Mahatma was unveiled in London’s Tavistock Square (picture). Since non-resident Indians were not a factor in British politics then, it was assumed Wilson reckoned that anything he said would be wasted breath. He wasn’t forced to ingratiate himself with ethnic South Asian voters. Unlike Theresa May, Samantha Cameron, Sarah Brown or Cherie Blair, Mary Wilson saw no need to flaunt sari or salwar-kameez.

As David Cameron’s chancellor of the exchequer, George Osborne, whom the wheel of political fortune has reduced to editing the Russian-owned freebie, Evening Standard, described Philip Jackson’s bronze Gandhi outside the Houses of Parliament in London as “a lasting and fitting tribute to his memory in Britain”. But a chance conversation exposed the falsity of the claim. Some weeks after the installation, a prominent English life peer with an interest in Indian affairs and highly-placed friends in New Delhi asked me at a dinner party in St John’s Wood in London what I thought of “the Gandhi statue”. When I began to say it seemed too tall for the plinth, he cut in with “But Gandhi is sitting cross-legged!” He meant the old Tavistock Square figure. Neither he nor anyone else round that table had heard of Jackson’s bronze which Osborne had called “a permanent monument to our friendship with India”.

Gandhi’s comments on that supposed friendship sounded too enigmatic, woolly and contradictory to permit conclusive interpretation. Asked whether he believed in England’s good faith, he replied he had faith in England because he had faith in the human race. Although “bitten” many times, he “trusted” England and “expected” the English to “be converted one day”. Despite that feeble testament, Gandhi was astute enough to know that the British connection will continue to flourish as long as Indians nurse worldly ambition and hanker for a slice of the pie of Western affluence and lifestyle. That has as little to do with Gandhi as a war-weary and bankrupt Britain’s decision to withdraw from an imperial role it could no longer sustain. If independence allowed Indians to invent a reason that reflected credit on the freedom movement and its stalwarts, it also allowed the West to claim the dignity of surrendering to the apostle of peace. The pacifism argument provides convenient excuses and alibis all round.

I haven’t seen the precise wording of the charge linking Gandhi with the Kashmiri plight. But Manchester’s Indian Society professes to be “deeply offended” by the suggestion that the statue was “insulting towards the Kashmiri community”. That seems to indicate that critics of the statue hold Gandhi responsible for the current situation there, possibly because he supported India’s war effort to repulse the Pakistani invasion. At the same time, some Hindu nationalists blamed Jeremy Raisman, the Leeds slum boy born to Lithuanian Jewish refugees who joined the Indian Civil Service and became finance member of the viceroy’s executive council, for Gandhi’s murder. It was Raisman’s thankless task to divide British India’s financial assets and Gandhi saw it as his moral duty to insist that India handed over Pakistan’s share. Given that background, it is anybody’s guess how Gandhi would have responded to the present crisis, especially after the impassioned speech that the “Ambassador of Kashmir”, as Pakistan’s prime minister called himself at the United Nations, made in September.

The Indian Society of Manchester dissociates Gandhi from “the political agendas on Kashmir” and “the actions of the current government in power”. Whether New Delhi accepts that dissociation is another matter. Gandhi is an even more prized asset than Vallabhbhai Patel in creating a past the Bharatiya Janata Party never had and shaping a future in which it looms large. It’s a question of one-upmanship and showmanship by those who are undeterred by the lone and level sands that stretch far away in Shelley’s Ozymandias. The Uttar Pradesh government rushed to reveal details of the Rama statue it plans for Ayodhya to upstage fraternal worshippers like the Shiv Sena and the Vishwa Hindu Parishad, which were suspected of plotting a massive temple. Devotion is a desperately competitive business. The new Rama on the banks of the Sarayu river, replete with pedestal and canopy, is expected to tower over the BJP’s own figure of Patel in the distant Narmada valley. Anna’s king of Siam would have been delighted with this childish obsession with height. So would the North Korean delegates who dragged out higher and higher stools at the Panmunjom truce talks at the end of the Korean War. In Patel’s case, there is the additional incentive of poaching on the Opposition to create the illusion of a lifelong Congressman being a secret pracharak.

Three incidents suffice to explain Gandhi’s pragmatism which makes all such self-serving posturing irrelevant. First, ignored by nationalistic editors when he returned from South Africa, Gandhi allowed the correspondent of London’s The Daily Telegraph to smuggle him into the whites-only Bengal Club for an interview. Second, when Jatindra Mohan Sengupta’s English wife, Nellie, complained that people were gossiping about her husband spending too much time in the Calcutta Club, Gandhi retorted it was a very nice club, and he wished he himself were a member. Finally, having read about Gandhi’s exploits as a student in London, Richard Symonds, the Oxford historian, was pleased to see the murals outside his place of martyrdom showing him dancing with demi-mondaine women in decollete dresses. “They haven’t deified Gandhi!” he said. “They are showing him as he was.” The dancing images had gone on his next visit: Gandhi was presented as the epitome of middle-class Hindu respectability.

He isn’t an easy personage to encapsulate. South Africa’s Jan Smuts commented when Gandhi returned to India, “The saint has left these shores, I hope forever.” A lesser leader would have tried to co-opt Gandhi to create a history in which nothing occurred before 2014.

Gandhi versus Lenin, in their time and ours