Advertisement
Home / Opinion / Gandhi versus Lenin, in their time and ours

Gandhi versus Lenin, in their time and ours

Among both the scholar and the 'aam admi', Gandhi’s posthumous global reputation is rather better than Lenin’s 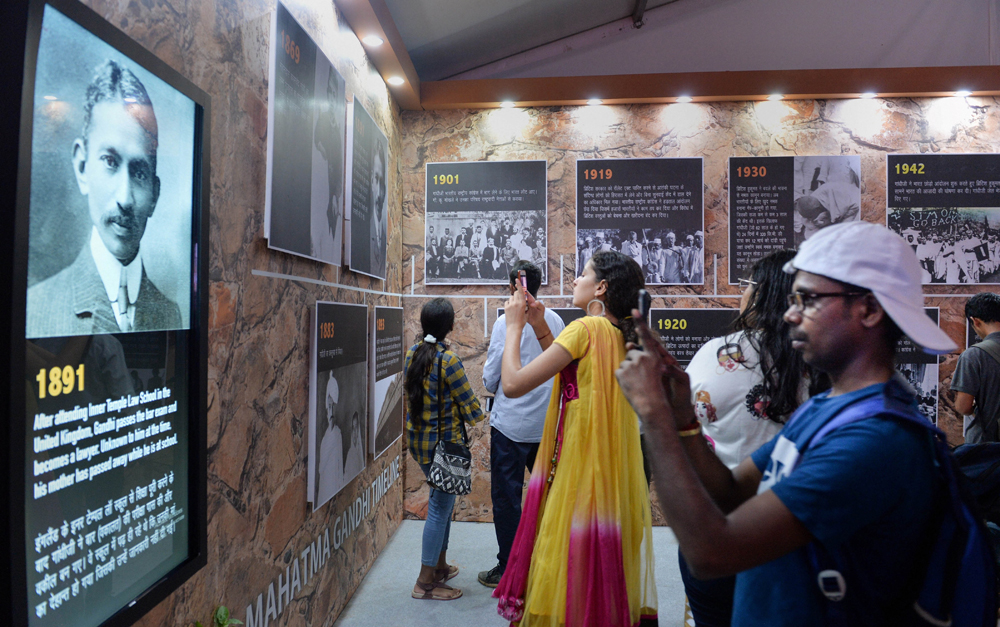 Visitors at an interactive digital exhibition on the 150th birth anniversary of Mahatma Gandhi in New Delhi. The anniversary was marked by praise and a fair degree of retrospective criticism. It will be interesting to see how the world celebrates the 150th anniversary of Lenin's birth
(PTI photo)
Ramachandra Guha   |   Published 11.10.19, 07:22 PM

I have been reading the diaries of the diplomat, Ivan Maisky, who served as Soviet Russia’s ambassador to the United Kingdom from 1932 to 1943. A scholar of history and philology, a fluent speaker of English with a wide circle of influential British friends, Maisky was at the Court of St James through the period of Hitler and Stalin, through the forging of the Soviet-Nazi pact and its break-up, through the first, fierce, years of the Second World War.

Maisky’s diaries — edited for publication by the Israeli scholar, Gabriel Gorodetsky — are naturally focused on British and European events and personalities. However, on Page 12 of the book, there is a single, but very intriguing, reference to an Indian politician. On November 4, 1934, after hearing the news that Mahatma Gandhi had (temporarily) retired from the Congress Party, the Soviet diplomat wrote in his diary: “Gandhi! I have Fülöp-Miller’s book Lenin und Gandhi, published in Vienna in 1927. The author sketches the two leaders with considerable talent, juxtaposing them as the two equal ‘peaks’ of our time. Seven years ago this comparison seemed absurd only to communists, and perhaps to a few of the more perspicacious representatives of the European bourgeoisie. But now? Who, even among the ranks of bourgeois intellectuals, would dare equate Lenin and Gandhi? Today, any man, even an enemy, can see that Lenin is an historical Mont Blanc, who will forever remain a radiant guiding peak in the thousand-year evolution of humanity, while Gandhi is just a cardboard mountain who shone with a dubious light for some ten years before rapidly disintegrating, to be forgotten just a few years later in the dustbin of history. This is how time and events separate authentically precious metal from its cheap imitation.”

Maisky was of course a zealously loyal employee of the Soviet State founded by Lenin. Yet, thirteen years before him, a young Indian with no reason to be obliged to Lenin wrote a tract exalting him over Gandhi. This was Shripad Amrit Dange of Bombay. In 1921, Dange published a slim book called Gandhi vs. Lenin. Notwithstanding his personal sincerity, argued Dange, Gandhi was a reactionary thinker obsessed with religion and the individual conscience. On the other hand, Lenin had identified the structural roots of economic oppression and sought to end it through collective mass action. While Gandhi looked to recreate the past, Lenin would preserve the ‘existing achievements’ of modern civilization, further building upon them by organizing the proletariat in a revolutionary transformation of society. Dange had never been to Russia and never set eyes on its leader. And yet, without knowing either man or country, he could confidently assert that “[t]he Bolsheviks have fulfilled their promises. ‘Land, Bread and Peace,’ they have given to Russia.”

Six years later, a Communist member of the British Parliament, himself born and raised in India, wrote an ‘Open Letter’ to Gandhi. Shapurji Dorabji Saklatvala accused the Mahatma of “misguided sentimentality” and — through his charkha movement — of launching “an attack upon machinery, upon physical sciences, upon material progress”. Saklatvala compared Gandhi unfavourably to Kemal Atatürk, Sun Yat-sen and, above all, Lenin. Whereas those other leaders had “express[ed] boldly and fearlessly the unexpressed voice of the people”, Gandhi, claimed this Communist, had prepared Indians “for servile obedience and for a belief that there are superior persons on earth”.

Saklatvala published his ‘Open Letter’ in 1927. Two years later, came along Bhagat Singh of the Hindustan Socialist Republican Army. In a statement made after his arrest for throwing bombs in the Central Assembly, Bhagat Singh claimed that his own act presaged “the end of the era of utopian non-violence, of whose futility the rising generation has been convinced beyond the shadow of a doubt.” This Lahore revolutionary explicitly urged young Indians to turn their backs on Gandhi and embrace Lenin’s path of violent revolution instead.

Like the Soviet diplomat, Ivan Maisky, Indian Communists of the 1920s and 1930s worshipped Lenin, while scorning Gandhi. Seeking to drag their own, ancient and ossified society into the modern world, they thought the erudite Bolshevik to be a more appealing guide than the mystical Mahatma. Thus Saklatvala claimed that Lenin’s Russia had shown the way to all humanity. He insisted that the “[c]lass war is there, [and] will continue to be there till any successful scheme of communism abolishes it.” Gandhi was advised to drop his own programme, and “come and organise with us... our workers, our peasants, and our youths, not with a metaphysical sentimentality but with a set purpose, a clear-cut and well-defined object and by methods such as by experiment are making success for all human beings.”

As it turned out, Lenin’s successor, Stalin, brutally persecuted workers and peasants, and many youths too. By the late 1930s, it was evident to clear-eyed observers that the Soviet Revolution had been a dystopian disaster, in both a political and an economic sense. But among a certain sort of Western liberals, a metaphysical sentimentality about the Revolution’s founder persisted for a long time thereafter. I recently came across an essay published in The Sunday Times of London in January 1972, by the then well-known literary critic, Cyril Connolly. Reviewing new books on Lenin and Gandhi together, Connolly remarked that the two were comparable in the scale of their significance, as “each changed the world by bringing a new direction to two of the great land masses.” However, the Englishman was certain that Lenin was much the greater man. Of the Bolshevik’s early death, at the age of 53, Connolly wrote: “If Lenin had lived as long as Gandhi, there would have been no Stalin. Would there have been a Hitler?” This English writer thought that Lenin, by the force of his will and the power of his ideology, would have prevented the rise of Hitler and Nazism.

Like Dange, Connolly admired Gandhi for his personal decency; quoting George Orwell’s famous remark on the Mahatma’s death: “[R]egarded simply as a politician, and compared with the other leading political figures of our time, how clean a smell he has managed to leave behind!” However, (like Dange again) Connolly was sure that Lenin’s legacy was far more relevant to the modern world. These were the concluding sentences of his review essay: “If part of Lenin’s legacy is the ‘doctrinal element of irreconcilability’ Gandhi’s is one of compromise. Yet if we were an oppressed worker in a sweated industry, would we not prefer Lenin to take charge of our cause?”

This was written in 1972. Workers had, by this time, enjoyed absolutely no rights of any kind for the past fifty-five years in Lenin’s Russia. Whereas in Gandhi’s India, they could at least strike for higher wages and better working conditions. Ironically, unlike paid-up partymen like Dange and Maisky, Connolly was himself an upper-class British liberal, fond of good food and fine wine. He was among the first likely victims of Leninism if Leninism actually came to his country. (Incidentally, Lenin liked good food and fine wine, too. One of the ironies of the Indian Communist denunciations of Gandhi was the fact that the so-called bourgeois reactionary lived like an ordinary worker or peasant, whereas Communist leaders in power in Soviet Russia lived opulently, like the Tsars who had preceded them.)

Gandhi was born in October 1869. Lenin was born six months later. They were near contemporaries; one reason they were so often judged together when they were alive. A second (and more important) reason is that they were the major leaders of two large countries with rich civilizational histories, each seeking to overcome political oppression and economic stagnation.

India (and the world) has just celebrated the 150th anniversary of Gandhi’s birth, with much praise being offered, some manifestly sincere, some shallowly instrumental — and along with a fair degree of retrospective criticism forthcoming too. It will be interesting to see how Russia (and the world) celebrates the 150th anniversary of Lenin’s birth. But I think it is fair to say that, on the whole, among both the scholar and the aam admi, Gandhi’s posthumous global reputation is rather better than Lenin’s. Pace Ivan Maisky, in 2019, it is the Indian prophet of non-violence and inter-faith harmony — and not the Russian proponent of armed revolution and class hatred — who is more likely to be seen as a moral and political exemplar, as — to so say — a “radiant guiding peak in the thousand-year evolution of humanity”.

Mahatma Gandhi and the land that cradled his last breath