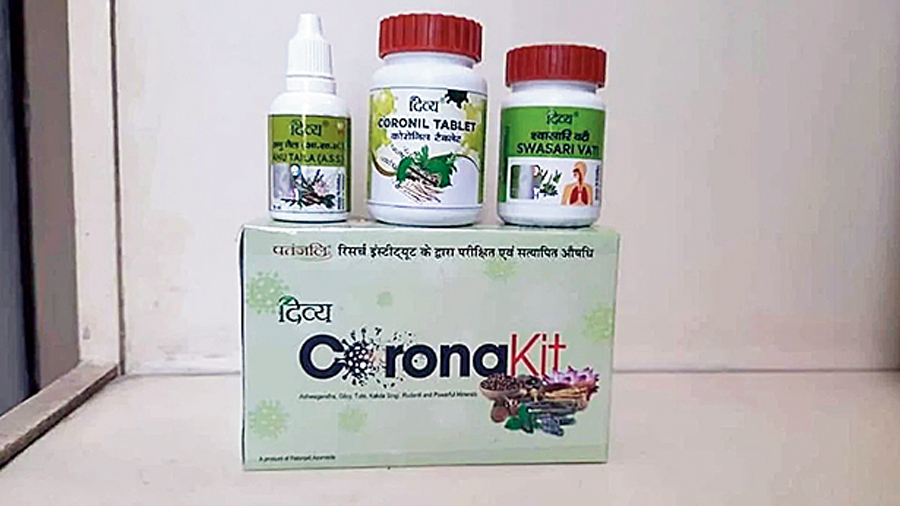 Earlier this month, the Ayush ministry offered detailed advice on how to build one’s immunity during the ‘Covid-19 Crisis’. To help ward off the dreaded disease, the ministry listed a series of specific recommendations, including, “Apply Sesame oil/Coconut oil/Cow Ghee... in both the nostrils in morning and evening”. However, if one didn’t like putting stuff in one’s nose, the ministry offered an alternative: “Take 1 table spoon sesame oil or coconut oil in the mouth. Do not drink, swish in the mouth for 2 to 3 minutes and spit it off followed by warm water rinse [sic]”. Other measures recommended by the ministry to stop oneself from getting Covid-19 include eating Chyavanprash, drinking herbal tea, doing steam inhalation and so on.

The publicity material put out by the Ayush ministry stopped just short of explicitly saying that a deshbhakt would not get Covid-19 if he or she followed the procedures recommended by it. But the implication pretty much was — if you follow these traditional practices, you are much less likely to catch the virus. Leaders and propagandists of the ruling party have been far less coy in recommending altogether unproven cures for this most deadly of 21st-century diseases. In my own state, the senior Bharatiya Janata Party leader and former MP, Vijay Sankeshwar, recommended lime juice inhalation as an alternative to oxygen (which was scarce in North Karnataka). The Hindu reported that “Mr. Sankeshwar had in a recent press meet said that administering lime juice through nostrils increased oxygen levels by 80%. He had said that he had seen this home remedy work in 200 persons, including his relatives and colleagues”. Several followers of the politician, the report continued, had died as a result of following their leader’s advice.

Meanwhile, in another BJP-ruled state, Madhya Pradesh, the culture minister, Usha Thakur, said the ancient fire ritual known as ‘havan’ was an effective way to combat the ongoing pandemic. The Telegraph reported the minister as saying, “We appeal to all to perform yagna and offer aahuti (oblation) and purify the environment because performing this sacred ritual to eliminate pandemics has been a tradition since ages”.

The minister’s advice appears to have been taken seriously by the members of her ‘parivar’. A widely circulated video shows volunteers with black caps and khaki shorts explaining how to conduct these havans in each house, using neem leaves and firewood for the purpose.

In another fantastical claim, the controversial MP from Bhopal, she who thinks Mahatma Gandhi’s murderer a true patriot, insisted that she has not contracted Covid so far only because she drinks cow urine every day. And in Gujarat, the state that has been ruled by the BJP for the longest time, it was reported that a group of sadhus are regularly lathering themselves with cow dung, convinced that this will prevent them from being infected with the virus.

Among the slew of dodgy cures recommended by leaders of the ruling party is the drug, Coronil, launched last year by the Sarkari Sant, Ramdev, in the presence of two senior Union ministers, one of whom was concurrently serving as the minister of health and the minister of science and technology. When Coronil was first promoted by Ramdev, “it was with the false claim that this would be a COVID cure, with ‘100 per cent recovery guaranteed’ within seven days, local media reported”. The head of the ‘Patanjali Research Institute’, one Anurag Varshney, claimed that the miracle drug “had received the scientific validation it needed”. He further claimed that “[t]hose who got the medicine turned Covid positive to negative in seven days but among patients who received the placebo, only 60 per cent... turned Covid negative. So it [has] well-defined in-built efficacy”.

Before I go any further, let me make it clear that I believe in medical pluralism myself. I do not believe that modern Western medicine has all the cures for all the ailments and diseases known to humankind. I know from intimate personal experience that non-modern systems such as ayurveda, yoga and homoeopathy can play a role in mitigating such ailments as chronic asthma, chronic backache and seasonal allergies, from which I have suffered at various points in my life.

However, Covid-19 is a distinctively 21st-century virus, unknown to those who invented and developed the systems of ayurveda, yoga, unani, siddha and homoeopathy. Besides, it is just a year and a bit old. There is absolutely no evidence that the burning of neem leaves, or the drinking of cow urine, or the swallowing of a pill made of plants, or the plastering on one’s body of cow dung, or the ingesting of coconut oil or ghee into one’s nostrils can have any effect at all in warding off the disease or in effecting a quicker recovery if one contracts Covid-19.

On the other hand, we do have enough evidence to show that two preventive measures do help enormously in warding off Covid-19. These are maintaining social distancing and having oneself vaccinated. And it is in these two respects that our proudly Hindu government has so dismally failed us, by allowing, indeed encouraging, larger and ever larger political and religious gatherings, and in not being proactive in boosting domestic vaccine production or in licensing new vaccines for use in India, despite having many months’ notice in which to do so.

I come from a family of scientists. Almost the only words of abuse that I ever heard my scientist father and scientist grandfather utter were ‘mumbo-jumbo’ and ‘superstition’. My father and grandfather are now dead; but I wonder what the distinguished Indian scientists I know think of all the fakery and quackery promoted by ruling party politicians in the name of combating Covid-19. Truth be told, this fakery and quackery, this superstition and mumbo-jumbo, are not just the preserve of the odd Union minister or the odd state-level politician. It is shared widely by members of the sangh parivar, among them the prime minister himself. Consider what he did last March, when the pandemic first made itself visible; he asked us to bang pots and pans for exactly five minutes, beginning exactly at 5 pm. Or what he did the next month, when the gravity of the situation was becoming clearer; he asked us to light candles or shine torches for exactly nine minutes, beginning exactly at 9 pm. How this would help us ward off the virus then spreading across North America and Europe perhaps only the prime minister’s astrologer and/or numerologist knew.

For the sangh parivar, faith and bigotry take precedence over reason and science. In acting as he does, Narendra Modi only reflects the narrow-mindedness of his own ideological upbringing. During his first prime ministerial campaign, he lavishly praised Ramdev for “the fire inside him and his determination”. He added, “I feel a closeness to his agenda”. That Ramdev has since emerged as the State’s most favoured sant is no accident. It is also entirely in character that the prime minister would consort actively with other shady, so-called godmen, or that he would appoint Rashtriya Swayamsevak Sangh hacks to important ministries such as education, health, and science and technology.

The most spectacular demonstration of Hindutva irrationality was, of course, the holding of the Kumbh Mela, brought forward a year because the astrologers demanded it, held in full force in the middle of the pandemic because the RSS and the BJP wanted to make social and political capital out of it. As the virus spreads deep into the North Indian countryside, one can — indeed must — trace a direct connection between the massive support given to the mela by the Central government and by BJP state governments on the one hand, and the countless bodies being cremated or floating in the rivers or buried in the sand, on the other. From the prime minister downwards (and not excluding the sarsanghchalak of the RSS), there were many powerful and influential men who could have prevented this tragedy from taking place. They did not, because, for them, faith and bigotry take precedence over reason and science.

In April 2019 — a little over two years ago — I wrote in these columns of the Modi government’s disdain for science, of how it had sought to politicize our best institutions of scientific research. “By so systematically undermining our finest institutions that produce knowledge and breed innovation,” I wrote then, “the Modi government has gravely undermined the nation’s social and economic future. Indians now living as well as Indians yet unborn will bear the costs of this savage, unrelenting, war on the intellect”.

Surgical strike against science and scholarship

At that time, Covid-19 was many months away from manifesting itself in the world. Now that it is here, and the Modi government continues its savage, unrelenting, war on the intellect, the gloomy future I outlined has become far gloomier still. In confronting this pandemic, India and Indians would have had a difficult time anyway. It has been made far more difficult and deadly by the disregard for reason and science exhibited by the Union government and the ruling party.