A giant in peril 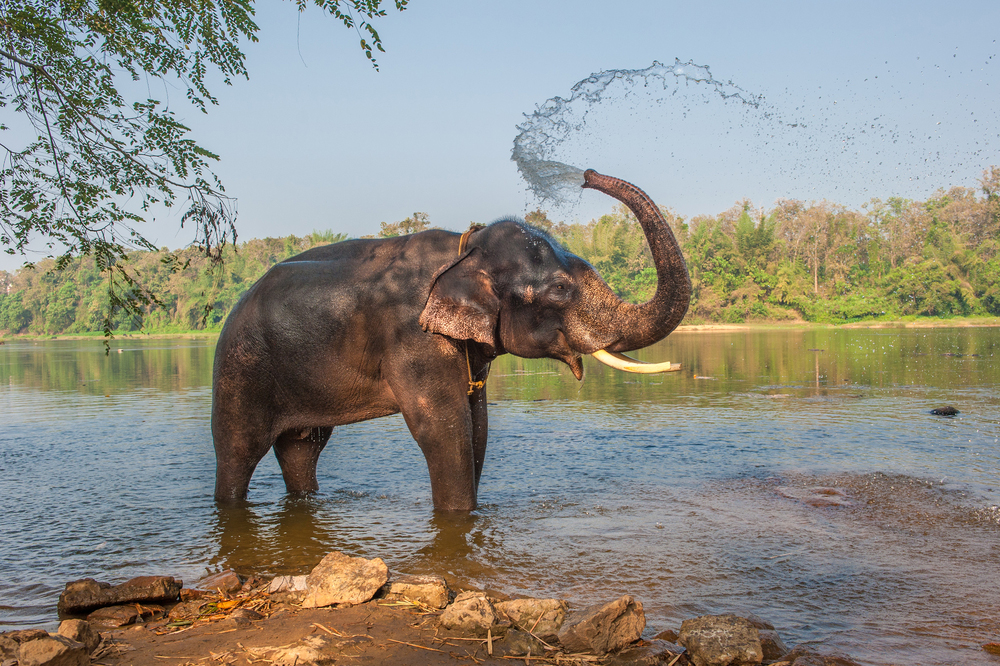 The death of elephants in fields and near human habitations is not a modern phenomenon but it is more, and not less, acute today than in the past
(Shutterstock)
Mahesh Rangarajan   |   Published 14.06.20, 06:38 PM

The sad case of the pregnant elephant dying in Kerala’s Wayanad district has put the spotlight back on the complexity of sharing the landmass of India with creatures great and small. There is deep empathy for the animal, which symbolizes so much for so many Indians. This is an animal most children can draw, and many have even seen it in captivity. It also has an appeal no other species can perhaps match — not even the tiger.

But living with elephants is far from easy. Their size and diet apart, they are endowed with intelligence and sociability being unearthed by scientific studies that make one thing clear. The spaces they cohabit in what remains of their habitat remain mired in conflict, not of one but many kinds.

The death of elephants in fields and near human habitations is not a modern phenomenon but it is more, and not less, acute today than in the past. Rice paddies and fields of ragi or pearl millet being raided by elephants are mentioned in Tamil sangam literature of more than 1,500 years ago. In 2010, the Elephant Task Force of the Government of India of which this writer was chair put together the larger picture with the help of state governments. Six of every ten elephants killed in the country were in defence of crops and livelihoods.

The reverse figure is also important: 400 people lost their lives to elephants every year. In recent years, the annual toll in human lives has climbed to over 500. Most are cultivators and labourers. Over half a million cultivators suffer serious crop damage and compensation money has been an integral part of policies of protection.

Since 1992, India has had a Project Elephant. It began with a simple principle: there do need to be protected areas free of human habitation or infrastructure to enable the species and kindred flora and fauna to breed and live freely. But elephants do not recognize boundaries made by humans. They wander out of parks as the media suggest: their home ranges include areas well beyond them.

More important, there are cases even in the recent past of herds moving into new areas where they have not been seen for decades. Over the last year, over two dozen elephants are in Bandhavgarh park in central India; this is a first in Madhya Pradesh since 1910 or so. Chhattisgarh in the last 15 years as well as Tirupati, Andhra Pradesh, have seen elephants arrive and become more sedentary.

But the issue of crop conflict is one of survival for those who live off and on the land. It is, in fact, striking how much remains to be done to make life less difficult as much for the cultivators as for the elephants. Many solutions that look logical, such as fences and trenches, have limited use. Maintaining them is not easy. Elephants have been recorded using the tusk (a non-connecting substance) to lift electrified wires. Trenches are easy to dig but not easy to keep in order. In any case, many plots are small and holdings are often scattered.

Talk of strict punishment makes sense in cases of extreme cruelty. But it may help to take a step back and ask what the objective ought to be. The elephant range is barely 1,20,000 square kilometres of India. The Task Force in 2010, as well as a similar committee set up by the Karnataka High Court, came to agree on somewhat similar approaches. There can be three kinds of zones: those where wildlife holds priority as in parks and sanctuaries, although participation of local people is a must. There are other larger areas where elephants and people will overlap much more. There may be some areas that need to be dispensed with as the populations are simply not viable.

The problem today is not with cultivators and crops: it is that India’s industrial infrastructure and the demand for minerals, energy and transport are eating away at lands critical for the movement, safety and viability of the remaining large mammal populations. India has 30 Elephant Reserves and 102 Elephant Corridors. The system of checks and balances worked to an extent in the past. In the 1970s, when the ink was hardly dry on the Wildlife Protection Act, the Tamil Nadu and Union government agreed to shelve the Moyar dam. This would have fragmented the Mudumalai sanctuary, part of a vast tract of forest over 6,000 sqkms, which spans three south Indian states. Not just elephants, tigers or gaur, it is also a vital storehouse of plants, animals and ecologies that are a living laboratory for scientists of different disciplines.

Later, the Forest Conservation Act, 1980 and the Forest Rights Act, 2006 were both invoked in denial of permission to mine bauxite in the Niyamgiri hills Odisha. This case, a decade ago, saw a rare unity of forest or wildlife advocates and those invoking adivasi rights. The elephant was also a beneficiary as the area was proposed as a reserve for the species.

But these cases are few and far between. The outcry over the elephant in Wayanad is not matched by that over the green signal to ecologically-damaging projects. The Chiria mines in the sal forests of Saranda, Jharkhand and the Hubli-Ankola railway line in Karnataka’s Western Ghats are cases in point. This unmaking of the landscape has been enabled by the making of the advisory committees on forests, wildlife and environment into mere rubber stamps. The cost for future generations, not to mention other species, will be incalculable.

It is not as if mines or rail lines must be halted per se. Far from that, it is that critical ecological zones that sustain rare fauna and flora can be maintained by realignment and planning. The headlong rush for growth at all costs was indeed the sine qua non of the early years after Independence. But due to middle-class and grass-roots pressures, India put in place checks and balances that are now coming undone, most so in the last decade or so.

To return to the elephant, cohabitation is a fact of life for many in rural and even small-town India. There now needs to be a fresher, larger approach to facilitate cohabitation where possible. This can only be done if those who farm, fish, herd or hunt are not asked to simply bear the cost of the loss to life, stock or crops. A range of innovative schemes has been attempted, but these need to be upscaled and funded. More important, there need to be long-term, locally relevant methods that account for both biology and the human dimension. India has the scientific wherewithal as well as the local elected bodies and the resources to craft such approaches.

The mosaic of life is vital not just for elephants or cultivators but also for the larger interest of keeping the land habitable and safe. The Covid-19 saga, much like the Ebola outbreak earlier, is a wake-up call to a new and more respectful compact with the natural world. If there is a time to act, it is now. The tragic event in Kerala and other such deaths, be they of animals or humans, require all the will we can muster.

A mouthful of hate