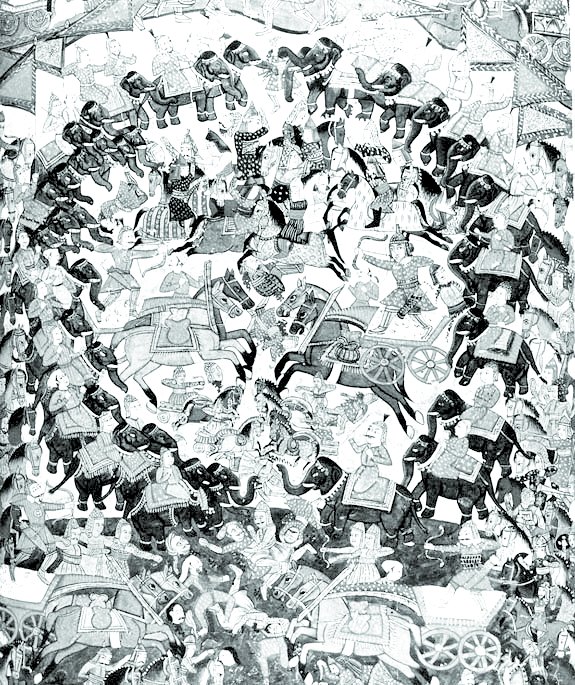 Thomas R. Trautmann rightly observes that the elephant has suffused the life and imagination of Indians in all periods. In this respect, it outshines its chief competitors - the lion and the tiger. A Ptolemaic coin depicts Alexander wearing a miniaturized elephant scalp, indicating how closely India was associated with the elephant in the Hellenistic imagination. What is the elephant's story? How did we get from the eight sprawling elephant forests mentioned in Kautilya's Arthashastra to the 31 elephant reserves in India today? The sharp drop began in about 1800 and had a great deal to do with European hunters and the demand for ivory. But, Trautmann argues, just as interesting and important as the retreat of the elephants are the reasons for their persistence.

The book offers many fascinating details about the animal's physiognomy and behaviour. For instance, because of its huge energy needs, a wild elephant spends 12-16 hours a day eating and looking for food. The reason why elephants feel so hot is because they have very few sweat glands, and these are on their feet. The 'musth' condition of a male elephant, is not exactly a 'rut'; it is neither seasonal, nor is it synchronized with the oestrous cycle of females. An elephant pregnancy lasts 18-22 months, usually resulting in a single birth.

Trautmann deftly traces elephant-human relations from the earliest times. The war elephant is the star of the show. As it is too expensive to breed elephants in captivity, adults had to be captured in the wild and then trained. This involved the development of skills and techniques of elephant capture, training and care. The people of the Indus civilization may have captured and displayed wild elephants, but there is no clear evidence that they rode them. Trautmann's main argument - and it is a convincing one - is that the 'invention' of the war elephant is visible in late Vedic texts and was linked to the beginning of the institution of kingship. The techniques of capturing and training adult males for war first developed in India in c.1000 BCE and were very common in north India by 500 CE. The king, forest and elephant were intertwined right from the start.

Trautmann discusses the elephant as the mount of kings, and its place in military formations and royal ceremonials. He takes us on a fascinating journey, documenting major changes in Indian military history, interspersing his narrative with striking textual excerpts and visuals. The early Vedic warriors rode out on horse-drawn chariots, with horsemen and foot-soldiers in tow. In the Ramayana and Mahabharata, on the other hand, we see a four-fold army ( chaturanga-bala) of chariots, elephant corps, cavalry and infantry. The military potential of cavalry was demonstrated by invaders from the west such as the Shakas, Parthians, Kushanas and Hunas. Later, elephant-based armies of Indian rulers were repeatedly defeated by horse-based armies of the Turks and the Mughals.

The reader's attention is drawn to telling details. For instance, in Ashvaghosha's Buddhacharita, Siddhartha makes his getaway from his palace on horseback; and when he lovingly talks to his horse, Kanthaka, he mentions that the king had mounted him many a time in battle. Chess, which originated in India and became popular in the Arab and Persian worlds and beyond, was based on the idea of the four-fold army and was, in fact, called chaturanga.

How was 'elephant knowledge' - the body of information about elephants - formed, maintained and transmitted over time? This happened partly through the numerous texts on elephant science as well as the practical, unwritten knowledge of forest people, hunters, trainers and mahouts. Again, there are interesting nuggets of information - the word 'mahout' apparently comes from mahamatra, a high-ranking official designation. This shows that although the mahout was a lowly employee of the king, he was recognized as a very valuable man.

The Arthashastra emphasizes the importance of elephant forests and has a very detailed treatment of the elephant. This includes the sources of the best elephants, the food and stables for the animal, and the ideal width of roads for its passage. The details, Trautmann points out, are very accurate and realistic. Elephant obsession and elephant knowledge continued into medieval times. Akbar is associated with elephants in several Mughal miniature paintings, and Abul Fazl's Ain-i-Akbari has a detailed discussion of elephant science, types of elephants, the mahout and his assistants, and methods of elephant capture.

The book documents the spread of the war elephant over India and Sri Lanka, and further into west Asia, north Africa and southeast Asia, and points out that this must have involved the circulation of elephant knowledge through king-to-king relations of alliance and war. The Romans and Chinese remained sceptical of the war elephant, but many other cultures embraced him. The discussion of southeast Asia is especially interesting (although the repeated references to 'Indianized' or 'Indianizing' kingdoms are irksome). Here too, the introduction of war elephants coincided with the beginning of kingship. Trautmann thinks this surprising considering the lack of diplomatic relations between the regions. However, considering the fact that several southeast Asian kings made religious grants in India, and given the intense cultural conversation between India and southeast Asia, the travelling of the idea of the war elephant is not really all that surprising.

Trautmann argues that it was the institution of the war elephant - which ended in India in the 18th century - that promoted the persistence of elephants in south and southeast Asia, because rulers were keen to preserve the animal for very practical reasons. Hunting by European colonials was the chief reason for the animal's decline. Its future in independent India continues to be worrying. Trautmann points out that the elephant is never fully domesticated; it retains some memory of its former freedom and returns to the forest if it manages to free itself from human bondage. He cites a Cambodian Sanskrit inscription, which compares a man leaving for the forest after surrendering all his wealth to a goddess with an elephant freed of its chains. An ancient poet recognizes the animal's longing for its habitat and its freedom. Persian poetry offers a more profound poetic allusion. The Sufis compare the soul of the mystic with an elephant in bondage in a distant, foreign land. When he dreams of his homeland, nothing can stop him - he breaks his chains and runs towards Hindustan.