The chequered history of military occupations

The line separating the liberator and the occupier, unfortunately, tends to merge with alarming frequency 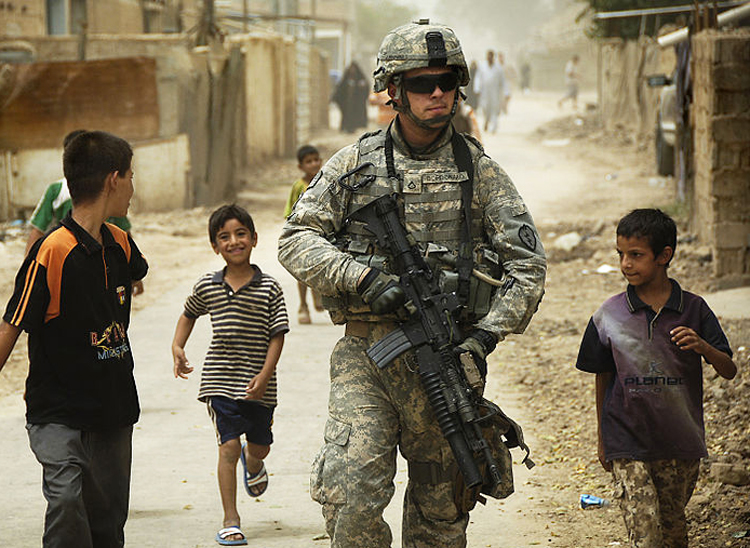 Iraqi children gather around a US soldier in Al Asiriyah, Iraq, in 2008. What breaks down the dubious narrative of the oppressor occupying the moral high ground, leading to the eventual failure of the occupation, is that violence perpetrated in the name of liberty is usually disproportionate
(Wikimedia Commons)
Uddalak Mukherjee   |   Published 19.08.19, 03:33 AM

The month of August is named after the Roman emperor, Augustus Caesar. Augustus had an illustrious pedigree: he was the grand-nephew of Julius Caesar. But the christening of an entire month after Augustus was not done in recognition of his singular bloodline. Of the several reasons cited by the Senate to justify Augustus’s claim on 31 days of a year, one — the card that won the hand — was the completion of the Roman occupation of Egypt under the emperor’s watch. Rome’s subjugation of Egypt, incidentally, is one of the earliest recorded instances of military occupation in history.

Since then, many a land has lost its sovereignty to the march of military boots. The twentieth century echoed with their thunder at regular intervals. The era began with Japan’s encroachment on the Korean Empire (1905), even as the two Hague Conventions (1899 and 1907) drafted the first-of-its-kind international legal charter defining such infringements. The post-War years, after Germany had been parcelled off among Western powers, signalled the beginning of some of the longest periods of military occupation. China gobbled up Tibet in 1950; it refuses to spit Lhasa out even today. Palestine lost the Gaza strip to Israel — New India’s new all-weather ally — during the Six-Day War; this strip of land continues to suffer blockades. The Soviet occupation of Afghanistan lasted for over nine years; the United States of America bled Iraq for eight years in the early years of this century.

Time and space have separated acts of military occupation, but these incursions share one common trait. They have, more often than not, ended in failure. The causes of their failure — one moral, the other strategic merit a closer examination, especially in an era when even democracies find the military marching tune irresistible.

According to the Hague Convention, one of the markers of military occupation, as opposed to annexation, is, apparently, effective control of a territory which is not ‘under the formal sovereignty of that entity’. This clause has been cited by, say, Tibet and Palestine to question the legitimacy of the claims made by China and Israel on their territories. But the aggressor is also an intelligent entity. The legal obstacle, history shows, can be circumvented by — the irony is stark — the invention of a moral rationale. Eyal Weizman, a British-Israeli writer, has a term for this ruse: he calls it ‘humanitarian violence’.

In his book, The Least of All Possible Evils, Weizman argues that nation states are complicit in a delusion that seeks to perpetrate evil — seldom is military aggression otherwise — in the name of neutralizing a greater, but projected, evil. Thus, the US transgressed into Iraqi territory with the pledge of ridding the people of the despotic Saddam Hussein. Some of the razakars, the militia guilty of annihilating thousands of civilians, students and intellectuals during Bangladesh’s war of independence, were convinced that the blood that they had drawn was necessary to protect the integrity of West Pakistan. It has been argued that India’s recent decision to do away with the special privileges of its northern, restive province was based on the perception of Article 370 being an impediment — a Greater Evil? — to the region’s integration with the nation.

What leads to the disintegration of the dubious narrative of the oppressor occupying the moral high ground, leading to the eventual failure of the occupation, is that the violence perpetrated in the name of liberty is usually disproportionate. The body count in strife-torn Iraq remains disputed. But what is indisputable is that the casualty figure during the occupation of Iraq far exceeds the death toll during the invasion of Iraq.

There is another — strategic — reason behind the unravelling of most military occupations. The line separating the liberator and the occupier, unfortunately, tends to merge with an alarming frequency. Iraq is readily offered as an example of the transformation of, figuratively speaking, the liberator Dr Jekyll into the occupier Mr Hyde, but there are numerous examples of such perfidies in American history that precede the US’s reneging on its pledge of liberating Iraq. For instance, the US ‘liberated’ the Philippines from Spanish occupation in 1898, only to go back on its promise to return power to the people. The former Soviet Union matches its Cold War adversary, the US, in this deception. Having freed the Baltic from the grasp of Nazis, Soviet troops stayed put on this stretch. Yet, Russians are apparently dismayed to learn of the existence of museums dedicated to ‘Soviet Occupation’ in the Baltic states. It is this violation of the compact between the liberator and the liberated, a calculated breach meant to prevent the return of true sovereignty to an oppressed constituency, that informs the history of failure of military occupations in the global context.

But Gaza, Tibet and, India’s adversaries would add, Kashmir show that some kinds of occupations can endure moral and diplomatic scrutiny. Astoundingly, this militarism is premised on a contrived sense of persecution. Benjamin Netanyahu, one of Narendra Modi’s staunchest allies, has convinced his people that his country has a right to acquire all of West Bank to obliterate the threat posed by radical outfits like Hamas. The immorality of the obliteration of a weaker opponent is thus sought to be concealed by a shrill, righteous claim to self-preservation.

The sleight of hand of predatory States does not always go unchallenged. ‘Breaking the Silence’, an Israeli group, has been collecting, for over a decade, oral testimonies of Israeli servicemen to provide a comprehensive evidence of the excesses perpetrated on the Palestinian people in occupied territories. These testimonies — are similar accounts of Indian soldiers even conceivable? — have the potential to challenge, if not sway, public opinion on infractions committed by muscular regimes.

Of course, the futility and moral hollowness of military occupation had been recognized by that peerless, prescient Indian born 150 years ago. When asked by a journalist about his vision of an ideal, independent, India, M.K. Gandhi, while on a voyage to London to attend the Round Table Conference, had outlined the map of a nation that was free of discrimination, intoxication and possessed the ‘smallest army imaginable’.

Modern India has responded emphatically to Gandhi’s dream by raising one of the largest military forces in the world.