Descartes and Ambedkar’s roads to modernity 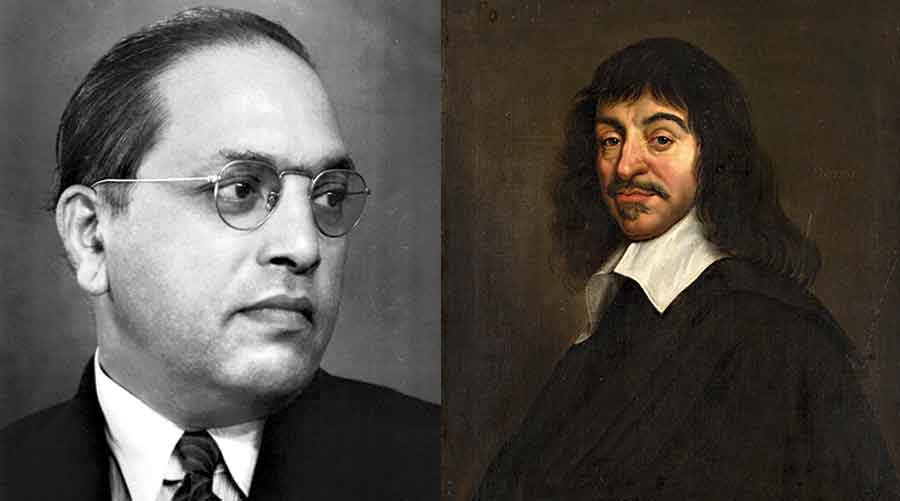 One decision can sometimes be followed by another. The intervening time between the two can be short or extended, invariant or transformational. How important is this time and can it affect the final decision? This provides the framework for the following discussion. Dr B.R. Ambedkar was a modern liberal. Inspired by modern ideas of rationality, equality, freedom and liberty, he fought against inequality and untouchability in the caste system. His unique approach to modernity is examined here, in the context of the temporal framework.

Modernity in the West distanced itself from all that is pre-modern, including Greek metaphysics and Christian theology, both of which justified the practice of inequality. René Descartes, the father of modern philosophy, lays down a clear-cut terrain of modernity in his Discourse on Method, by totally disinheriting everything from the pre-modern. This disinheriting included history, oratory, poetry (as it was considered a gift of the mind rather than the fruit of study), moral writings of pagans, customs and the evolutionary growth of societies. He rejects childhood as it is controlled not by reason but by appetite and teachers. Descartes also rejects classical logic and mathematics for their association with the pre-modern.

Like Descartes, Ambedkar, too, embraced modern ideals. He used modern liberal ideas to critique Hinduism. This led him to move away from Hinduism, distancing him from leaders like M.K. Gandhi. Ambedkar felt that Hindu society is “devoid of humanity”. It does not “recognise the importance of an individual” and specifically does not respect Dalits as individuals. Untouchability — which is “nothing but concrete inequality” — pervades Hinduism. The only alternative for Dalits, according to Ambedkar, is to leave Hinduism.

Thus there is an underlying thread connecting Descartes and Ambedkar — their desire to distance themselves from the societies that practice inequality in the pre-modern. This similarity is, however, confined to the domain of departure. There is a need to closely examine the other aspects involved in the process, especially the time between departure from the pre-modern and arrival at the destination, as also the nature of the place of arrival. Descartes, who finds nothing from the pre-modern to be acceptable, takes no time to decide between leaving the pre-modern and arriving in the modern. The modern that he wants to arrive at is governed by cognition which follows rationality, especially instrumental rationality, where there is a direct relationship between cause and effect.

However, there are differences between Descartes and Ambedkar on two accounts. One is concerning Ambedkar’s choice of an alternative path from the past to ease the transition to modernity. The other is about the duration between their departure from the pre-modern and arrival at the modern. Interestingly, Ambedkar made the unique choice to consider alternatives from the pre-modern instead of toeing the Cartesian path of modernity. This was not acceptable to Descartes. Options from the pre-modern in any form are not permitted in modernity or to Descartes. This was also contested by B.K. Roy Burman. Here I would like to draw attention to the intervening time between Ambedkar’s decision to depart from Hinduism and his final arrival at Buddhism. A study of this interim period will throw a different light on how he arrived at this decision.

There were about 21 long years — from 1935 to 1956 — between his decision to leave Hinduism and finally convert to Buddhism. During this time, he weighed various options — Islam, Christianity, Sikhism and Buddhism. He finally settled on Buddhism as it rejected the deeply entrenched hierarchy and inequality in Hinduism. Though modernity was a readily available option, Ambedkar did not feel that an immediate move to modernity would be a suitable path for the Dalits. Here I would like to highlight the significance of the time taken by Ambedkar between these two decisions. This eluded the attention of those like Burman. The long process of weighing different options before he arrived at the decision to convert to Buddhism should not be ignored.

Ambedkar’s decision seems to have been governed more by the ethics of care than by radical politics. He felt that after being oppressed for so long, Dalits were not in a position to immediately embrace the ideals of abstract Cartesian individualism. This required long preparation, including education, literacy and learning to live a modern life. Ambedkar realized this and chose Buddhism as he felt that it provided both relief from oppression and opportunities for Dalits.

Ambedkar used the analogy of a sailor who plans and makes the necessary arrangements before embarking on a voyage to explain the process of conversion and the need for prior preparation. Descartes, on the other hand, used the metaphor of demolishing an old house and living in an interim place while the new home was built. He envisaged the transitory phase to be brief whereas Ambedkar rightly predicted that it could be quite long. Hence, his decision to first convert from Hinduism to Buddhism instead of embracing modernity right away.

The merits of the path taken by Ambedkar are apparent when compared with the activities of other Indian academics educated in the West. They, too, inherited the path of Descartes and modernity. However, unlike Ambedkar, they did not pay sufficient attention to calibrating their modern views for India. Not surprisingly, their attempts to forcibly fit modern ideas into Indian society remained unsuccessful. Ambedkar, on the other hand, turned his gaze away from the Cartesian path to critique Hinduism and liberate Dalits, and seriously deliberate on the suitability of modern ideas to the Indian situation. What distinguishes those like Ambedkar from Indian academics is turning towards or returning to India after learning political ideas from the West. This is reminiscent of the failed return of Pahom in Tolstoy’s short story, “How Much Land Does a Man Need?” or Abhimanyu’s failure to return from padmavyuham.

In this context, the works of Ambedkar and other Indian thinkers will be an immense academic contribution in understanding different aspects of Indian society, particularly those that overlap with modern Western political ideas. A detailed reading of them will help us understand not only the similarities and differences with contemporary philosophers from the West but also enable us to appreciate the unique Indian approach to time and temporality.