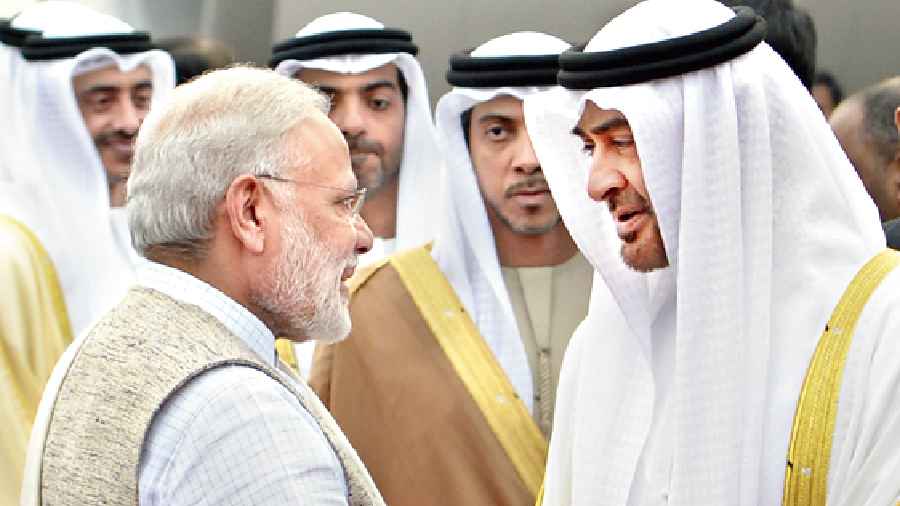 Modi, while moving to position India as an Asian alternative to its rival, China, in the Quad, an alliance that brings it closer to the United States of America, Australia and Japan in the Indo-Pacific, has simultaneously cemented India’s position as a key partner with the newly- emergent troika of Saudi Arabia, UAE and Israel.
Neena Gopal   |   Published 15.06.22, 02:34 AM

As protests turn violent in Muslim-centric neighbourhoods across India’s restive cities in Uttar Pradesh and West Bengal, amid desperate attempts by the Bharatiya Janata Party’s social media bots to pass the buck by pointing fingers at ‘our neighbour’ for stoking the violence, Delhi’s pushback against worldwide Islamic censure must bring home to the Narendra Modi government the perils of its doublespeak.

The vilification of Muslims at home under Narendra Modi may have been glossed over in Islamic capitals, seen as being driven by domestic compulsions. But the crass invective by BJP spokespersons against Islam’s most revered figure, Prophet Mohammed (PBUH), that has sparked Muslim outrage requires more than the trite line trotted out by India’s diplomatic missions that it accords “the highest respect to all religions”.

Managing the ire of Tehran and Abu Dhabi and other Islamic states — including the Taliban in Kabul — is, undoubtedly, the challenge. But far more imperative is the need for the prime minister to realise that he risks not just jeopardising the carefully-crafted relationship he has built with leaders across West Asia but also putting India’s vast diaspora in peril. An unsettling video clip of Arabs beating an Indian in an unnamed Gulf country that is doing the rounds on social media raises the spectre of what awaits millions of Indian expatriates living abroad.

No doubt, only days after Tehran summoned India’s ambassador to protest against Nupur Sharma’s attack on the Prophet, Iran’s foreign minister, Hossein Amir-Abdollahian, did hotfoot it to Delhi. The priority was to tie up a deal that would finally operationalise the International North South Transport Corridor through Iran’s Chabahar port and open much needed connectivity for India to begin oil imports from Russia. The Iranian minister, reportedly, also downplayed Tehran’s demand for an official public apology for the attack on the Prophet, which no longer figured in the final joint statement. Similarly, post the unexpected rap by Abu Dhabi, and doubts over whether the United Arab Emirate’s minister for artificial intelligence, Omar Sultan Al Olama, would be a no-show, he did attend the India Unicorn Summit 2022 in Mumbai last Friday.

Abu Dhabi and Tehran have thrown Delhi a lifeline. But as the Uttar Pradesh chief minister, Yogi Adityanath, sends in the bulldozer wrecking crew after Friday’s protests, it is the quiet fury sweeping across the country among the world’s largest Muslim minority — roughly 213 million Muslims who make up 15 per cent of India’s population — that will be trickier to quell. Will Indians immune to Modi’s thrall countenance such an India?

Nupur Sharma and Naveen Jindal have clearly thrown a lit match into the embers of a seething cauldron. It’s now a raging fire. The majoritarian State that is being forged may need a course correction to shed India of the tag of religious intolerance.

Does the ruling party even believe it is necessary?

After all, post the Babri Masjid demolition, there was barely a whimper. At home, and in the Gulf. On December 6, 1992, as the BBC started flashing pictures of saffron-clad kar sevaks armed with nothing more than trishuls bringing down the Babri Masjid in Ayodhya, I was at an event hosted by the Bangladesh consul-general at his home in Dubai; probably, the only Hindu present, and needless to say growing more uncomfortable as the evening progressed. More so, as reports came in of angry Indian Muslims homing in on a tiny little mandir tucked away in a warren of streets dominated by Indian traders in the shopping district of Bur Dubai a.k.a ‘Little India’. The shrine was vandalised. The Krishna idol decapitated. Photographs of the mayhem, as Sindhi and Gujarati store-owners and restaurateurs raced to down shutters, as their own staff turned on them, were never made public. There was no public condemnation of the Babri demolition that day, or the next. No démarche. No summons to the Indian envoy by the UAE government or any government across the Middle East. It was shrugged off as part of the internal polemics of an impoverished third world country.

In the Nineties, the anger of the Muslim community against Hindu traders didn’t take long to dissipate. Livelihoods and remittances took precedence. The ‘93 Mumbai blasts by the Pakistan-sponsored D-Company of Dawood Ibrahim, who fled Dubai for Pakistan, saw D- Company influencers shun the spotlight. But Indian expatriate numbers have grown, not just in the UAE where they make up more than a third of the population but across the Gulf where some 89 lakh Indians — Hindus and Muslims — live and operate. Their education, skill sets, apolitical leanings, give them an edge over erudite Arabs and even Pakistanis who are looked at with suspicion after the jihadist al Qaida and its Pakistan-Afghan offshoots, the ISIS and the Muslim Brotherhood-stoked Arab Spring movement drew recruits, including a handful of UAE nationals.

Pakistan’s espousal of the Kashmir cause was a stumbling block to further ties. But 26/11, the 72-hour siege of Mumbai, would change perceptions as Delhi gave quiet access to Emirati and Israeli intelligence to the scene, laying the ground for far greater intelligence-sharing in the years to come. The big shift came as Narendra Modi, reviled for the 2002 Gujarat riots, stepped into the shoes of the much-loved Atal Bihari Vajpayee in 2014. As India’s profile as a rising South Asian power coincided with its growing economic heft, it was clear that Modi’s India could no longer be shunned.

The UAE, under Sheikh Mohammed bin Zayed Al Nahyan, who has just taken over as president, led the push to draw India into a closer economic embrace. The UAE is now India’s third-largest trading partner and second-largest export destination, with bilateral trade valued at $72.9 billion in 2021-22. Indian exports are valued at $28.4 billion.

The newly-forged Comprehensive Economic Partnership Agreement with the UAE could boost trade to $100 billion. Key elements of CEPA would allow Indian pharmaceutical companies, which have won plaudits for their Covid vaccines, to start manufacturing from within the UAE, opening it up to international markets; as would India’s gold industry. The UAE’s recent move to attract investment through a ‘Golden Visa’ saw at least 44,000 applications accepted, of whom a sizeable number are said to be Indians.

Modi, while moving to position India as an Asian alternative to its rival, China, in the Quad, an alliance that brings it closer to the United States of America, Australia and Japan in the Indo-Pacific, has simultaneously cemented India’s position as a key partner with the newly- emergent troika of Saudi Arabia, UAE and Israel. The non-descript shrine in Dubai’s Indian quarter will soon be eclipsed by a fullfledged temple in Abu Dhabi — the foundation stone was laid by Modi in 2018 — an acknowledgment, if any was needed, of India’s strategic investment, spiritual and material, in the Islamic world. But Modi’s ability thus far to separate the domestic stoking of anti-Muslim sentiment to consolidate the Hindu vote and keep his governments in power at the Centre and in the states, all the while disregarding international criticism of not just Kashmir but the many blatant attacks on Muslims by his party workers, is rapidly unravelling.

The venality that permeates India’s internal fissures and colours the shouting matches on social media and television can no longer be ignored. Sharma and Jindal, dubbed as ‘fringe elements,’ may have been axed but no one’s fooled by the dissembling. It is going to need a lot more than re-editing joint statements for Modi to restore India’s sheen.

Neena Gopal is a foreign affairs analyst and author