Controversy and the Durga Puja are inseparable in Bengal 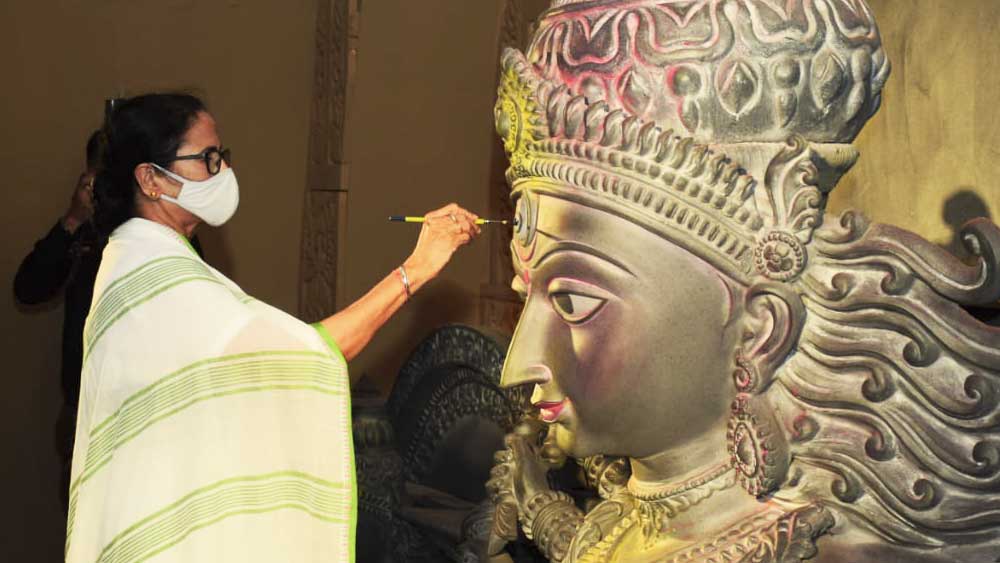 The five days of Durga Puja in West Bengal constitute one of the largest street carnivals in the world. It is undeniably a Hindu religious and cultural festival symbolizing the triumph of good over evil, the invocation of shakti, and even the homecoming of the daughter and her children. Over the centuries, it has evolved from being a family event to a community celebration involving people of all faiths — in line with the way the Christmas season (as opposed to Christmas Day) has evolved in the West. Predictably, it has also acquired a huge commercial dimension, in the same way as Diwali in northern India. This has been accompanied, particularly in the past decade, by over-politicization and the sites of worship being converted into avenues of political propaganda.

As with a festival that takes place on a monumental scale and, quite naturally, involves the state administration, controversy and the Durga Puja are inseparable in West Bengal. Some of the earlier points of friction centred on the iconography of the goddess, with some organizers seeking innovative ways of presenting images of Ma Durga. In the three decades of Left Front rule in the state, the communists were ostensibly disengaged from the invocation of the goddess according to Hindu religious traditions. At the same time, since the festival witnessed the spontaneous involvement of the masses, a very conscious decision appears to have been taken to transform the Durga utsav into a sharadotsav, a process of secularization that involved underplaying the importance of Hindu traditions in the cultural life of Bengalis. Subsequently, in years when the five days of Durga Puja coincided with a Muslim festival, the state government intervened to give the minority community the right of passage. This, in turn, triggered political controversy and the matter had to be resolved through a judicial order.

Some of the shifts in the public culture of the Durga Puja festival have been described by the historian, Tapati Guha-Thakurta, in her seminal work, In the Name of the Goddess: The Durga Pujas of Contemporary Kolkata (2015). “What began in the early 2000s as a shift away from the vulgarized culture of scale, opulence and glitter to a new premium on moderation, refinement and artistry has also reversed to renewed styles of sensationalism and gimmick, celebrity endorsements and a fanfare of inaugurations. Central to this turn has been the impassioned takeover of the Durga Pujas by Chief Minister Mamata Banerjee and her political entourage in every major Puja ward and neighbourhood, leaving its inescapable imprint on all aspects of the visual culture of the festival. If Didi’s face now competes with Ma Durga’s for hoarding space, her round-the-year presence on the streetscape of the city taking on a new visibility in the season’s banners and hoardings... she has also thrown herself into the fray as a ‘Puja artist’ herself, bringing in her trail other leaders and ministers who are making their debuts in Puja designing. The sharply transformed political life of the festival finds manifestation in newer scales of Didi’s largesse and licenses — as she doled out pre-Puja donations to local clubs, waived at will corporation regulations and taxes over commercial hoardings, made it mandatory for various municipal departments to sponsor ten Pujas in the city and one Puja each in the district, or as she moved into a Puja inauguration spree from Mahalaya...”

Since 2019, after competitive politics acquired a new turn in the state, there has been a discernible trend towards using ‘theme’ pujas to promote partisan politics. In earlier years, this included the exodus of migrant labour and the alleged iniquities of the new citizenship laws. This year, in what a state government minister has described as ‘an expression of artistic freedom’, a Puja pandal has been embellished with slippers, denoting the farmers’ agitation in North India. But whereas the earlier forays into political grandstanding had been brushed aside as needless or, in some cases, applauded as expressions of popular sentiment, the slippers controversy has taken a more vicious turn. The use of slippers in an event centred on worship has been denounced as a wilful assault on the sentiment of practising Hindus since it is customary to approach the deity barefoot.

It is entirely possible that this act of insensitivity constituted an act of bravado, a feature of Bengali radical iconoclasm since the Young Bengal movement of the 19th century. However, neither those who threw pieces of beef into the homes of unsuspecting Hindus, thereby hoping they had secured a new convert, nor those Naxalites who beheaded statues of national icons to promote revolution enjoyed any social sanction, let alone political patronage. Today, the embellishment of a Puja with decorations of slippers is being portrayed as art, and those taking offence being tarred by the brush of bigotry. However, a foray into the past of Hindu Bengal would suggest a different trend. In his collection of essays on 19th and 20th century Bengal, Perceptions, Emotions, Sensibilities (1999), the historian, Tapan Raychaudhuri, pointed out — with examples from the lives of, among others, Rammohan Roy and Shibnath Shastri — that the intellectual acceptance of what is called ‘reformed Hinduism’ did not involve jettisoning traditional practices and ordinary decencies. In the guise of turning Durga Puja into a secular festival — where the chandipath could just as well become a version of the Buddha Bar background music and the Puja presented as some meaningless mumbo-jumbo from the past — what is being encouraged is a process of uprooting society from its inheritance.

Whether this spurious cosmopolitanism will turn Bengali Hindus into true inheritors of the Enlightenment and take ‘progressive’ thought a step or two forward is a matter of conjecture. The Hindu ethos of Bengalis differs in important ways from the everyday traditions that prevail in both northern and southern India, but there are important points of convergence. It is pointless accusing a clutch of street-smart politicians with an eye on some future election of insidious religio-cultural engineering. But there is a case for suggesting that Bengali exceptionalism is slowly being steered in dangerous directions.