Why the commute from the airport is a nightmare 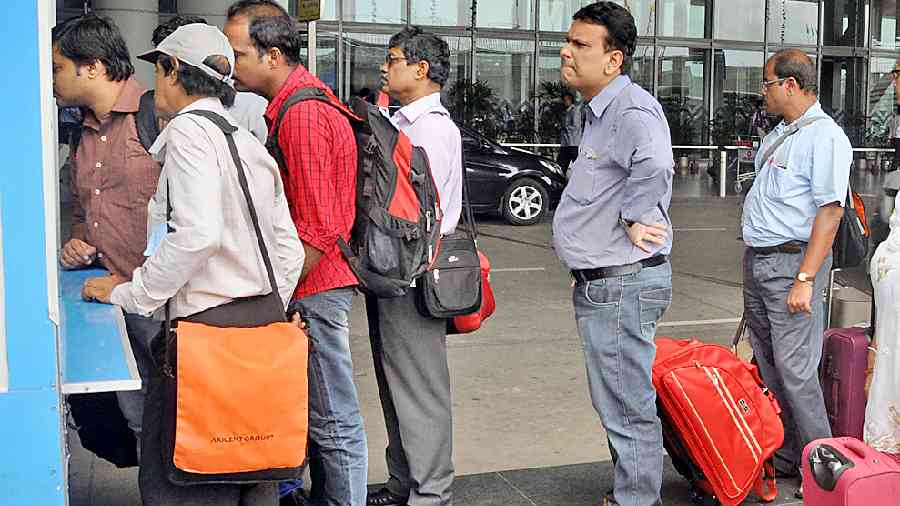 A possibly apocryphal story used to make the rounds in Calcutta in the mid-1980s, from the days when a producer had to jump through many hoops to get a television serial on to regional or national television. A producer of Bangla serials decided to expand his operations and went to Delhi to try and get a serial ‘passed’ for national television. Expecting a lengthy campaign, he booked a hotel room for a month and made arrangements for various tranches of cash that would be required to obtain a no objection certificate (an NOC, the green light for making the serial) from the relevant babus. Everyone in the producer’s office fully expected a month or more of relaxation while their boss struggled through the byzantine corridors of Mandi House. However, exactly a week later, the man was back, with a dazed look on his face. The questions were obvious: they are asking for more money, isn’t it? How many times will you have to go back? The boss took out the NOC and slapped it on the desk. “Let’s start production” he said.

The story explains that in Delhi you get what you pay for: you go to the babu’s office and he tells you what an NOC will cost; once you agree, someone picks up the cash from your hotel; a few days later, the same fellow comes to your hotel and drops off the NOC and you’re good to go. This was shocking and unbelievable for anyone who had dealt with the TV  babus in Calcutta. Here, you had to make multiple visits just to get a gauge of the bribe-price. Then, after you paid up, quite often the price would go up. After which there was still no guarantee that you would get the NOC, or, indeed, when you would get it — it could be in a few months, it could be next year, or it could be never, with no question of any ‘refund’. Just because it was an underhand exchange, it didn’t mean anyone would keep their word or that any special efficiency could be expected.

Arriving at Calcutta airport last week, I was suddenly reminded of this story. My flight from Delhi landed at around 2.15 pm. I calculated that it would take 30 minutes to get my suitcase and maybe another hour to get home. I was wrong about the second part, and ridiculously so. Walking out, I opened my Uber app to ping for a cab and made my way to the correct bay. The app began its animated-dash disco and told me it was looking for drivers. After 15 minutes, it became clear that something was wrong. I re-launched the app. It repeated its empty dance, the map showing traffic-less streets. After a while, it informed me that there were no vehicles at my location and I should try later. A man standing next to me was having the same problem with Ola. With several flights coming in that afternoon, there were apparently no app cabs to be had at a place like the airport.

Someone pointed out a booth for prepaid private taxis and I made my way to it. After a ten-minute wait, I reached the counter and named my destination. “Nine hundred and seventy rupees,” said the man in a flat voice. The officially metered yellow taxi fare from the airport to my house is about 380 rupees; the Uber app, informing me of the surge prices for non-existent vehicles, was clocking in at 615 rupees. Unwilling to be the victim of daytime highway robbery, I turned away and trundled my trolley to the pre-paid booth for the normal taxis. There was a queue of about fifteen people. I reckoned I would reach the counter in about twelve minutes.

Half an hour later, I was twelfth in the queue. The man in front of me was shouting to his wife a few feet away to tell her to stop bothering her phone for Ola cabs, that there was really none available. The man behind me gently pushed my backpack. I turned to give him a death stare. He gestured to indicate he wasn’t trying to jump the queue; nor was he overcome by some urge towards unwarranted friendship; he just wanted to get out of the sun and into the pillar shadow next to me. Behind him, about thirty people had now joined the queue. It had become clear that there were no yellow or ‘normal’ cabs to be had either — we were all waiting for the metered cars to trickle in. I looked over to the private booth and saw that the queue there had stretched as well — evidently there was also a shortage of extortion-taxis.

After forty minutes had passed, the man in front of me shared his shattered travel plans with his wife and the rest of us. His voice filled with rage, he informed the world that they had now missed the Berhampore train from Chitpur and that he, she and the kids would have to try their luck at dreadful Sealdah. “This is why I no longer have any truck with this city!” he snarled. Two yellow taxis wandered slowly into the bay and the queue moved a bit. As we reached the counter, the passenger ahead of me began to give the man at the counter a piece of his mind in pure, steel-sharpened Bangla. “You people have created this disaster for everybody, yet you are too lazy and incompetent to take advantage of it!” The counter-man protested, “What have we done?” “You people have made sure there are no Uber or Ola cars, but you can’t be bothered to make sure your own people are there to take the fares!” Before the counter-man could reply, the entire queue within earshot of the booth was joining voice with the complainant. The police constable standing there tried to defend the taxi associations so the ire turned to him and ‘the obvious role of you police people in this whole fraud operation’ was underlined with some vinegary vehemence.

By the time I got home in a filthy normal (non-yellow, non-Amby), it was nearly 6 pm, almost four hours after I’d landed. It occurred to me that I hadn’t seen this avatar of shoot-itself-in-the-foot Calcutta for many years.