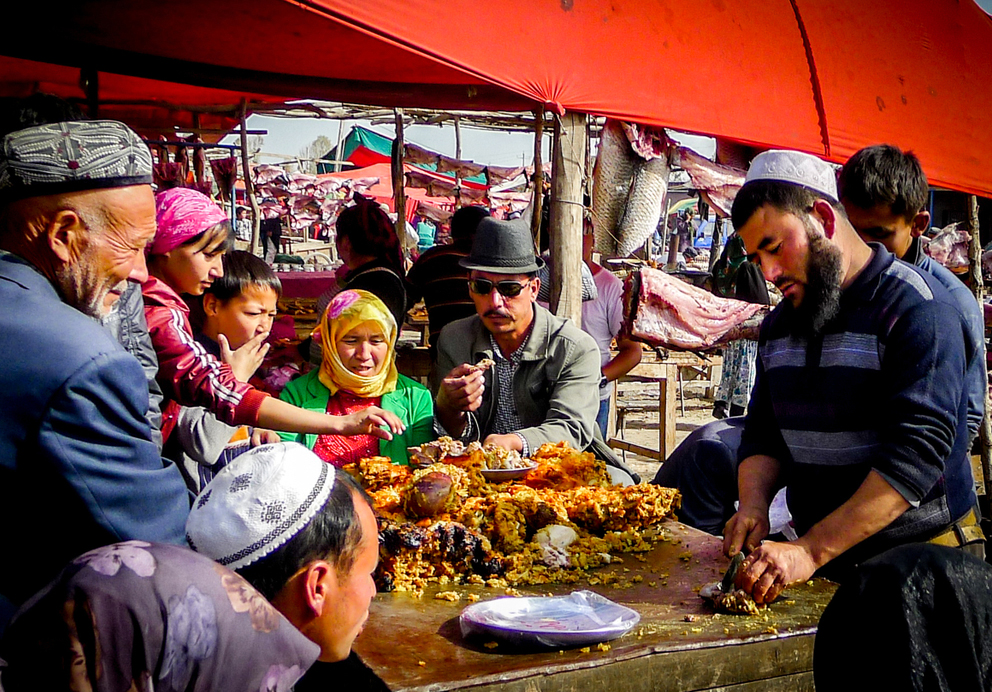 An Uighur man serves food to a group of people at the Yopurga weekly market near Kashgar in the Xinjiang Uygur Autonomous Region in western China
Shutterstock
Neha Sahay   |     |   Published 02.11.18, 03:04 AM

The ultra-nationalist online daily, Global Times, has some advice for the government of the United States of America following the Pittsburgh synagogue shooting: learn from the Chinese government how to handle terror. Follow the Xinjiang model.

Xinjiang in northwest China has seen sporadic terror attacks since 2009, allegedly plotted by the separatist movement for East Turkestan, whose leaders live outside China. There is little evidence to show that the majority of Xinjiang’s residents — Muslim Uighurs of Turkish descent — support them. But the government has descended heavily on them, with not only a security crackdown, but also restrictions on following Islamic customs. These initially applied only to government employees, but last year, a law was passed banning 15 ‘extremist’ practices such as sporting burqas and ‘abnormal’ beards, and giving children names such as ‘Saddam’ or ‘Islam’.

The real game-changer though, has been a phenomenal increase in ‘re-education’ centres, set up to ‘cure’ Uighurs of extremism. Today, the United Nations estimates that a million Uighurs, including entire families, are inside these centres. In the face of Western criticism, the Chinese media is on an offensive.

The girl forcibly married off to an imam as his seventh wife; the businessman who loafed around in Turkey and from there went to Pakistan and got arms training; the unemployed youngster who spread extremist ideas and beat his wife because he believed she was just his appendage — the Global Times has published their statements of gratitude for having been “saved” by their stay in these “de-extremism vocational camps”. Compare this with the revelations of former camp inmates who managed to leave China: torture and solitary confinement for those reluctant to follow the daily camp routine of memorizing Communist Party dogma, denigrating Uighur traditions and that old staple, ‘self-criticism’.

The ‘re-education’ includes teaching Mandarin and vocational training. For years now, the Hans — the majority race in China — have been encouraged to settle down and invest in Xinjiang (as in Tibet). Han entrepreneurs complain that Uighurs are difficult to employ because they do not speak Mandarin, and also that women are not allowed to work. After ‘re-education’, these handicaps disappear. A beneficiary of this process, who now works as a driver in a private company, told the Global Times he wanted to build a better life for his family. But that is not all: his wife gushed that earlier, he would “act like a male chauvinist and never cared about house duties. Now he gets up early and helps with the housework.”

But along with running down Uighur customs, these camps also aim to eradicate some of their core religious beliefs, including “pan halalisation”. Insistence on halal toothpaste is seen as a sign of extremism, but so is insistence on halal food, specially by government employees. A senior prosecutor recently wrote an essay titled: “Friend, you do not need to find a halal restaurant specially for me.” Food served in Xinjiang’s government offices will no longer be labelled halal. Some reports have spoken of disobedient camp inmates being forced to consume pork.

If these measures are not enough to “stamp out separatism” and foster integration, there is more. The mayor of Xinjiang’s capital recently wrote an article which said: “The Uighur people are members of the Chinese family, not descendants of the Turks.” More disturbing is the practice of sending Han party cadre to spend five days a month with every Uighur family. The cadre help in household tasks like sweeping the yard, but also see to it that the entire family watches State TV every day.

A law to protect heroes and martyrs