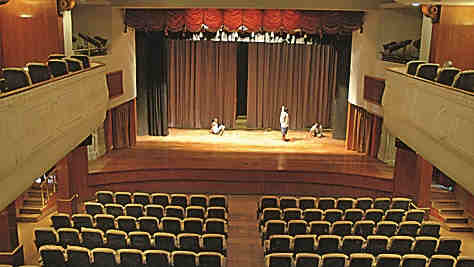 One of my earliest memories of theatre is of darkness. I am a sleeping child, eyes shut tight, about to be slaughtered at the divine altar. It is Rabindranath’s play, Bisarjan, where the goddess needs human blood. The priest carries me and I feel the silent movement. I knew when the slaughtering machete is to come down on me; my heart screams but I keep quiet as promised. The king’s sword blocks the priest’s machete. He will not allow the sacrifice of life in his land. I would live, grow up to be a real human being.

I was three years old. The play was a local affair, performed in a primary school in North Calcutta. My school principal, a giant of a man with great shaggy hair, played the priest. My mother, a professional actor, was the cruel queen. “It’s going to be a little scary,” they’d asked me, “Can you stay quiet?” I had fulfilled that promise. I had played the sleeping child who did not know how close he came to being slaughtered.

My tiny role in that play, in many ways, predicted what theatre would mean in my life. A child in a blanket of darkness, the fury of swords over me, a religion thirsty for blood, a king pledged to prevent the murder of innocents — Rabindranath’s play breathes too much reality for this nation to bear. But it was also the semi-conscious nature of the moment, the primal fear and joy of life, the breathing proximity of one of my earliest teachers and, most importantly, of my mother, whose acting life would be a source of much pride, beauty and pain all through her brief life and her short-lived presence in my own.

A finely executed play as the work of a local community, an intense classic with political undertones. It speaks so much of Calcutta, a certain Calcutta where I grew up. A wilted tradition of feudal decadence, the languor of unemployed (or under-employed) youth, a sharp, left-leaning political polemic. This was a mixed bag of contradictory things, but they made up everything from which we were asked to keep away if we wanted a rewarding career and a safe life. This was the city to leave behind. For those of us who came of age in the 1980s and 1990s, straddling the liberalization of the last decade through the continuing apathy of communist rule, life and career were to be staked on the desertion of the old drugs.

My personal stakes were higher. It was difficult to be the only child of an actor who struggled with career, family, and community all her life for brief luminescence on stage. Starting with Manoj Mitra’s Sundaram, my mother moved through many groups, often forming lasting bonds — Theatre Workshop, Nandikar, several others — before appearing for the last time for Sayak. Glances of her on screen return to me from time to time — as the widow of a slain Naxalite interviewed by a journalist played by Goutam Ghose in Buddhadeb Dasgupta’s Grihayuddha, the sister-in-law of Rani Rashmoni in the early years of the mega serial. A mud-splattered Antigone, carrying the corpse of her dead brother, in Hansgünther Heyme’s production in the open grounds of St Paul’s Cathedral.

But middle-class society, too, is its own dramatic stage, especially when it comes to a married woman’s life in theatre. The conflict of belief and passion created intense trauma in its own right and spilled into the alleys run by the communist moral police. Plays remained the bitterly sonorous clash of swords that were too spectacular, too sharply shamed by the public eye. Literature, in the spirit of bourgeois modernity, the quiet isolation and solipsism of print, was the safe space to which one could turn. Safer, more distant, if it be the literature of the West, richer with promise, with the potential to flee a city starting to feel claustrophobic.

But how does a Bengali grow up in Calcutta without theatre? My personal terrors, including the emotional death-trap of watching, as a five-year-old, Ma die on stage, would later breathe into my novel, The Firebird. But it also shaped a happy delirium through which I experienced many worlds. There was the amazing universe of Utpal Dutt and People’s Little Theatre — the sharp-white naval revolt of Kallol and its searing explosions, the lyrical pain of the assassination of Mahatma Gandhi in Ekla Cholo Re, a play sharply criticized by a high school friend who would later become a national leader of the Akhil Bharatiya Vidyarthi Parishad. The drowsy spring cornucopia of Chaitali Raater Swapno, Dutt’s translation of Shakespeare’s A Midsummer Night’s Dream, where the agile elf, Puck, springs in and out of my fancy. The spellbinding chimera of Bohurupee, led by Kumar Roy, and the death of giants: of Galileo who dared to speak the truth before the world was ready for it, of Joan of Arc who went up in flames at the stake right in front of the stage. The last one, Jean Anouilh’s L’Alouette, translated as Aguner Pakhi, the bird of fire, by my mother’s brother, Arup Rudra, who taught literature at Jadavpur University, branded that image of the burning woman into my soul to inspire, years later, the carving of the novel with the soul of a play.

But the last decades of the last century were a twilight hour. While we marvelled at the experimental aesthetics of the plays in halls like Girish Mancha, Academy of Fine Arts, Rabindra Sadan, Madhusudan Mancha, lights started to go out in another set of playhouses, mostly around Hatibagan in North Calcutta, a few of them in the red-light district along Central Avenue. Rangmahal, Star, Circarina, Minerva, Kashi Bishwanath, Biswarupa — if they did not reinvent themselves as a movie hall or a repertory theatre, they became shopping malls or banquet halls. Or, in the case of Circarina, whose owner, the octogenarian, Amar Ghosh, I interviewed in 2012 shortly before his death — just a decrepit, deserted building. There are few things, I realized, more heartbreaking than an abandoned theatre hall, the dust-glazed seats, and, at Circarina, a cobwebbed circular stage.

For these playhouses held the hue of a different genre — the babu theatre of feudal culture, the gaudy naturalism of commercial theatre as opposed to the progressive experimentations of group theatre, a binary set in motion since the Indian People’s Theatre Association emerged as a firm voice of the left. Dying in the brightening glare of multi-channel television, the mega serial, and video culture, the loud and often licentious genre of middlebrow culture, once a raging hit with the middle-class Bengali, was allowed a lonely death by a communist government that naturally didn’t care about it. Mysterious fires that enriched realtors and insurance beneficiaries, too, helped cremate some of them.

Burnt playhouses hold much of the city’s memories, as they hold some of my own. The sensory trauma and communal spectacle that make up plays pushed me to the quiet safety and privacy of literature. It was not till many years later that I would realize that my imaginative life as a novelist would be strung to the primal rhythms of performance.