Bricks in the wall

The future city is being built with past technology 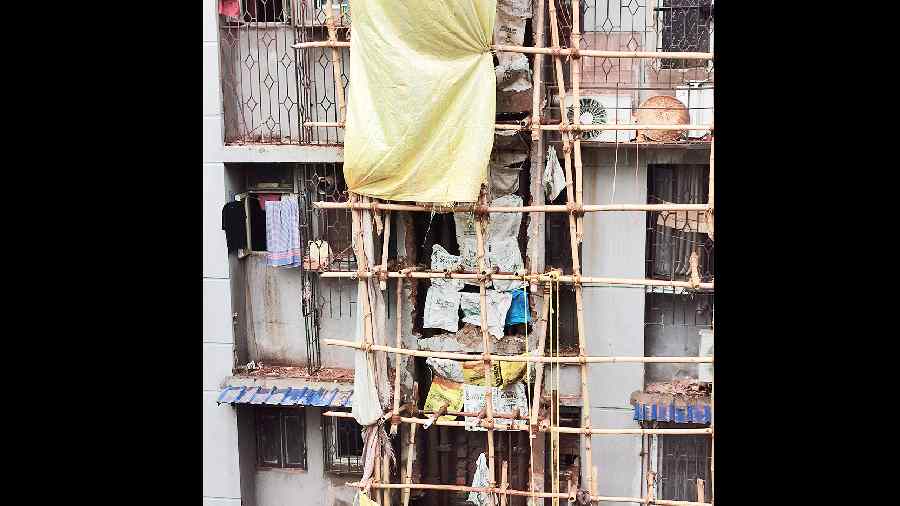 Taking down a bamboo scaffolding from a six-storey building is a tricky thing. The grid is held together by ropes, keeping the horizontal bamboos in a constant 90-degree-ish agreement with the vertical poles. All of this is further anchored to the building by more ropes tied to drain pipes, window grilles and balcony railings. Compared to a modern, metal scaffolding, there is a lot more flexibility and give to this bamboo structure, but to the adept worker, it provides a firm platform from which he can repair, plaster or paint the outside of the concrete block.

Once the work is complete, the whole thing needs to be taken down. A slow, complicated dance then begins between two men who climb up to a median point and start to loosen the knots in a precise sequence. One man stands on the terrace of the building, waiting. As the upper bamboos are loosened, the men below push them towards the terrace man, for him to grip and pull away. Knot by knot, pole by pole, rung by rung, they make the top part of the grid disappear. The men working the knots are then suspended around the third floor. From here, the bamboos are too short to be sent up — the only way for them to go is down. If you’re watching from a window at the same level in the next building, this is when you start to feel the creep of vertigo. The men have no harnesses, nothing to stop them from plummeting thirty of forty feet to where the marble inlay of the driveway awaits them. As you watch, the two men nervelessly untie each horizontal rung and loop a long rope around one end, before turning it vertical and winching it down to the terrace man who is now on the ground. As each horizontal rung is dismantled, the vertical bamboos tilt apart a little more, become increasingly unstable. The men hold on, sometimes with just one hand and half a foot. They contort themselves down to the next level, now depending more and more on what the building offers as grip or platform. At some moments, it feels as though a skin is being peeled off the concrete; other moments remind you of the early Soviet space launches where the cranes fell away to release the Soyuz rocket into the void. After a while, the men and the bamboo are gone. Repainted over the hottest days of the year, the building is now naked, stolid and unmoving.

No sooner is this dizzying choreography concluded than an even higher scaffolding starts to go up on the building on the other side of my flat. This ten-storey behemoth was completed around 1997 and it is already in need of serious repairs. The architect, in his conceit, had created pointless little alcoves outside the smaller windows, which became perfect receptacles for rubbish thrown from those windows and the ones above. Just last year, I witnessed a man sitting on a narrow wooden slat winching himself down from the top floor. He swung down from floor to floor, pulling the rubbish off its cubby holes and sending it cascading to the parking lot where the Land Rovers and BMWs are normally parked. This year, the problem being addressed is more serious. Another folly of the architect was that he had encased the external bathroom pipes, hidden them inside broad concrete bands that stood out in relief from the building wall. Clearly these pipes have now rotted. Once the scaffolding went up, long drapes of gold-coloured tarpaulin were hung to cover the offending bands, as though the ghost of the wrappery-artist, Christo, had come by and doodled absently. Presently, men began to climb up behind the drapes and the electric jackhammer sound began to reverberate around my cluster of buildings. This was followed by the sound of rubble falling and heavy objects hitting the ground from a great height. At the end of each day, the bottom of each drape exhibited a piled defecation of smashed brick and rusted piping. After a few days, the rainstorms ripped away bits of the tarpaulin and the fruits of this ‘reverse’ engineering were clear to see: exposed girders, raw red brick walls with bits of orphaned plumbing sticking out.

At 9 am one morning, I saw a man wedged between the wall and the scaffolding around the eighth floor, unmoving, as though asleep. After a few moments, he moved. He splashed his face from a water bottle suspended in front of him, took a swig from it, and sent it down. Presently, an electric drill made its way up on the same rope and he set to work, smashing open the masonry. As the denizens of the buildings played their Maa ke Bhajan and practised their cha-cha-cha and salsa, just outside their windows were men perched eighty feet above the ground, relaxed and nonchalant as though they were living there, which, in a sense, they were.

This is where we are in the year, 2022. Even as the climate tightens its noose around us, the rash of high-rises continues to spread around and beyond greater Calcutta. Even as we head deeper into the 21st century, we are totally dependent on technology and perilous labour practices from centuries ago. Even as political leaders beat the drums of a ‘five-trillion-dollar economy’ and turning our cities into Singapore and Shanghai, our working class is needy enough for labourers and lowskilled technicians to not think twice about risking their lives daily to service the requirements of the privileged.