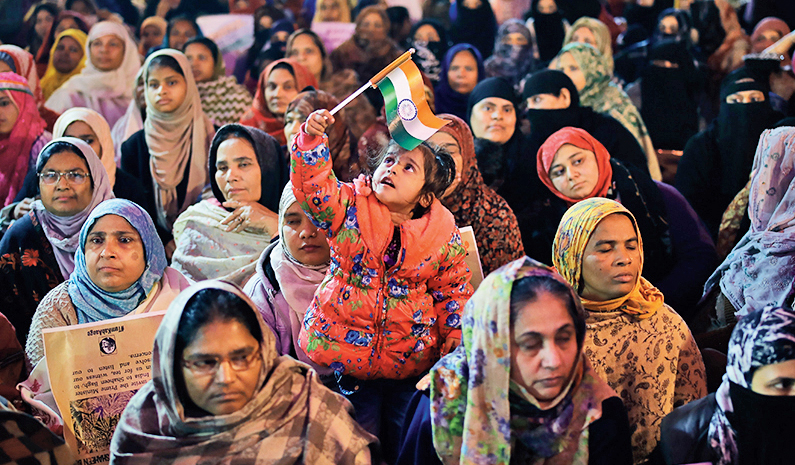 The Aam Aadmi Party grew out of the spectacularly successful occupation of Ramlila Maidan organized by Arvind Kejriwal and his campaigning organization, India Against Corruption, in 2011. Anna Hazare’s hunger strike, his fast-unto-death, was the altar piece of this masterfully organized protest that brought the United Progressive Alliance government to its knees. The movement’s main demand, the creation of an institutional ombudsman to investigate corruption, is now a forgotten footnote but the campaign for the Jan Lokpal helped change the history of Indian politics. By indicting the Congress as the party of Old Corruption, the IAC helped build the political context in which the Bharatiya Janata Party led by Narendra Modi won a parliamentary majority in 2014 while Kejriwal used the political goodwill generated by the movement to create the AAP.

There is one thing that the movement against the Citizenship (Amendment) Act, centred in Shaheen Bagh, has in common with the IAC’s Ramlila Maidan protest: both venues incorporate a park in their names. The difference is that Ramlila Maidan is, in fact, a large ground traditionally used for political meetings, but there is no bagh in Shaheen Bagh, a Muslim neighbourhood made up of narrow lanes, without expansive open spaces. In the absence of such a space, the protesting women have occupied and blocked off an arterial road.

There are other differences. The television news channels were overwhelmingly sympathetic to the IAC’s cause as were the main Opposition parties of the time, particularly the BJP. There was broad public support. Kejriwal and Hazare became national figures thanks to round-the-clock media coverage and Hazare’s hunger strike had a near-perfectly scripted end, with the government seeming to concede the IAC’s demands which allowed Kejriwal to call off the protest and declare victory.

It’s reasonable to say that the 24/7 news channels have been systematically hostile in their coverage of Shaheen Bagh and the anti-CAA protests, with the odd exception. Opposition parties and their leaders haven’t fallen over themselves to endorse the sit-in. The AAP has been particularly careful not to associate itself with Shaheen Bagh for fear of alienating non-Muslim voters and giving the BJP an opportunity to characterize it as a Muslim-appeasing party. Pressed by the BJP’s concerted push to make the Delhi election a contest about the Shaheen Bagh sit-in, Kejriwal said that the protest was inconveniencing commuters but put the ball in the BJP’s court by arguing that it fell within the Central government’s remit to disperse the protest and vacate the road.

For the most part, the AAP’s balancing act on Shaheen Bagh has been sympathetically viewed by people opposed to the BJP as a tactical necessity in the context of contemporary politics. Since there is a significant overlap between Delhi voters who vote for the BJP in general elections but switch to the AAP for the assembly elections, it makes political sense to confine the AAP campaign to its success in delivering material benefits like better schools, subsidized water and electricity and public healthcare, to its electorate. But it does raise a larger question: where does the anti-CAA campaign symbolized by Shaheen Bagh fit into the frame of electoral politics which determines political power and confers political legitimacy in a parliamentary democracy?

Is this campaign to remain a series of de-centralized, non-party-political civil society sit-ins and protests like Occupy Wall Street? The main sit-in in that movement was in Zucotti Park and despite the enormous media coverage and popular support that it generated, the protestors were forced out of the park by the NYPD in just under two months. As the murmurs and complaints about commuter inconvenience build to a crescendo, with more than a little help from Modi, Amit Shah and Adityanath, there will be pragmatic arguments made about vacating the Shaheen Bagh protest now that it has succeeded in its main object: raising consciousness about the insidious design of the CAA and the National Register of Citizens. There is also the argument that to indefinitely occupy a public thoroughfare is to invite the steady consolidation of public resentment and to alienate ordinary citizens from the cause the protest represents: the undoing of a communal citizenship regime. In the lead up to the Delhi election it was sometimes argued that Shaheen Bagh had become a whetstone for Amit Shah and therefore a liability for the AAP in particular and Opposition politics in general.

Whether the BJP’s campaign pitch against Shaheen Bagh damaged the AAP’s electoral prospects in Delhi is best left to the election results and the psephologists who will mine that data, but it’s worth saying that the anti-CAA movement is unlikely to be shaped by the electoral calendar. The pragmatic politics of the possible would never have birthed Shaheen Bagh; it is unlikely, therefore, to decide its fate. Both the IAC and the anti-CAA movement have this in common: they used techniques of civil disobedience and satyagraha to produce political spectacles that dramatized their causes. The difference between the two was that behind the IAC’s Ramlila Maidan spectacular was the intelligence of a single master-strategist: Kejriwal. Shaheen Bagh, brought into being by an existential challenge to equal citizenship, is a carnival of passionate dissent, not a blueprint for a new electoral politics.

The historical significance of Shaheen Bagh is that at a moment when the BJP was ramrodding its majoritarian agenda through Parliament and the higher judiciary without institutional check or public resistance, the women of an obscure Muslim mohalla literally got in its way. Occupy Wall Street had the bronze Fearless Girl facing down the Charging Bull. The anti-CAA movement has flesh-and-blood women sitting athwart a rampaging State. Shaheen Bagh was a rallying point at a time when the opposition to majoritarianism was either cowed or non-existent. It was a place to rally around, a place to take a stand, a place to literally plant a flag. Shaheen Bagh rallied the progressive base; that, in itself, was an extraordinary achievement. It created networks and solidarities, made ‘othered’ Muslims familiar to millions of liberals and progressives, made Muslim women, so often cast as figures of reaction, symbols of heroic dissent.

By appropriating the flag, the map and the Constitution, the protestors at Shaheen Bagh have made the case for a secular republic peopled by equal citizens in the broadest way possible. They have returned to liberals and progressives the totems of the republic sharpened into tools with which to build a broader coalition. But the challenge of electoral politics remains. Kejriwal has shown that it’s possible to build a political constituency in Modi’s backyard. Shaheen Bagh has demonstrated that it is still possible to galvanize people on a pan-Indian scale around a republican principle. Progressive politics in India needs a fusion of AAP-like canniness with Shaheen Bagh’s republican zeal.

Shaheen ‘experiment’. Did you mean it, PM?