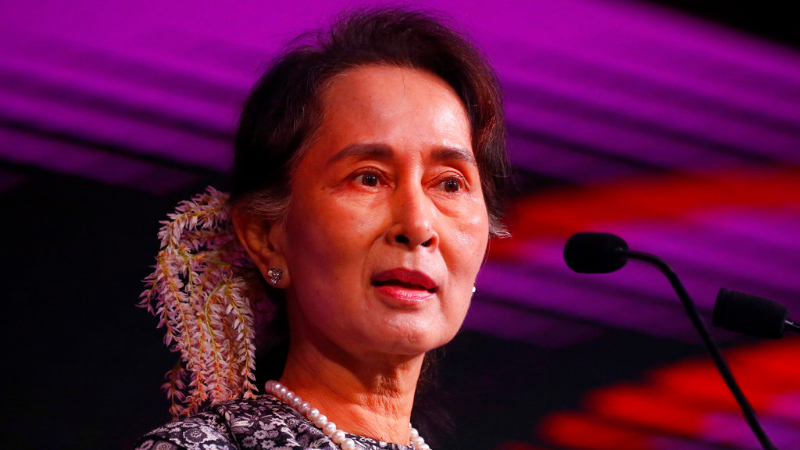 Aung San Suu Kyi may try pushing the army hard, partly to revive her drooping image as a crusader for democracy and partly to gain real control over a country her father led to independence
AP Photo
Subir Bhaumik   |   Published 21.02.19, 02:03 PM

After conceding much ground to the Tatmadaw — the all-powerful Myanmar army — Aung San Suu Kyi has finally locked horns with the men in uniform in her efforts to amend the Constitution. In the last week of January, the Myanmar Parliament was witness to a unique sight: military lawmakers in green standing up together in silent protest against a parliamentarian from Suu Kyi’s National League for Democracy tabling a proposal to form a committee to amend the Constitution. The main purpose of the “all-inclusive” panel will be to “write a bill to change the 2008 constitution”, the deputy Speaker, committee chair and NLD lawmaker, Tun Tun Hein, told Parliament. The NLD will be allocated 18 out of 45 seats on the panel, the military will have eight and the remainder will be divided among other parties. There has so far been no detail about the specific reforms the panel will address or how its recommendations will be implemented.

Sources in the NLD say the panel could target clauses 59(d) and 59(f) in Chapter III of the 2008 Constitution now in force. While clause 59(d) states the president must “be well acquainted with the affairs of the Union such as political, administrative, economic and military”, 59(f) says that the president must be someone who “he himself, one of the parents, the spouse, one of the legitimate children or their spouses not owe allegiance to a foreign power”. These clauses were put in place specifically to deny Suu Kyi’s bid for the presidency because she has two sons from her marriage to a British professor, Michael Aris.

Party sources also say that most in the ruling party want to do away with provisions that guarantee the military three ministries — home, defence and border affairs — and also 25 per cent of the seats in Parliament. Along with the provision that a constitutional amendment needs a 75 per cent vote in Parliament, it means no change to the Constitution is possible without the military agreeing to it.

Suu Kyi failed to reach settlements with warring ethnic militias to bring peace for sustainable development, because it would never be possible without Myanmar changing into an effective federation. The latter is precisely something the army would try to stall. The developments in Rakhine, where the army pretty much conducted its ethnic cleansing in Rohingya areas despite Suu Kyi’s commitment to implementing the recommendations of the Kofi Annan-led Rakhine commission, indicate that she has to take on the army in order to bring about change. Or she can just about hang on to power and risk a fall from grace in the 2020 parliamentary polls. Constitutional reform was a central pillar of the NLD’s platform ahead of the 2015 general elections, but little progress has been made as leaders have proved reluctant to confront the military. When asked why the NLD was now trying to amend the Constitution, a party parliamentarian, Ye Htut, told the media: “It is the election promise.” Suu Kyi has been touring ethnic minority areas where NLD support is at its weakest and holding up Myanmar as an investment destination to global investors. “As the 2020 elections are starting to influence political calculations in Myanmar, it is not surprising that the NLD wants to show progress on one of its key manifesto pledges,” says the Yangon-based political analyst, Richard Horsey. “But it is also aware that this is a sensitive issue for the military. Establishing a committee is a much relied-on way to signal intent without immediately forcing the issue.”

Suu Kyi has so far ruled from ‘above the president’ by creating a new position of state counsellor, which the military resisted but then conceded to. But she would be keen to change the Constitution so that she can contest for presidency and also curb the powers of the military in order to bring about peace with ethnic minorities. If the army agrees to changes to provisions that block Suu Kyi’s bid for presidency, the NLD may not push for more fundamental structural changes. But most NLD parliamentarians have called for a change to Article 436, which gives the military the effective veto over constitutional reform.

On January 29, the NLD lawmaker, Aung Kyi Nyunt, submitted an “emergency proposal” to discuss a committee that could suggest amendments. After the Speaker agreed to put the proposal to a vote, green-clad military lawmakers rose to their feet and stood in silence. The NLD won the vote 394-17. The military may not be in a position to oppose the amendments, with threats of sanctions looming, but it will try delaying them. Much depends on how far Suu Kyi is prepared to go if the army puts its foot down. Years ago, she accepted a military-drafted Constitution that provided for limited democracy just to get a taste of power. Now that she knows power can be bitter if not experienced in full, she may try pushing the army hard, partly to revive her drooping image as a crusader for democracy and partly to gain real control over a country her father led to independence. Sheikh Hasina Wajed’s success in neighbouring Bangladesh in controlling a military that was once all-powerful may inspire Suu Kyi, who has little to lose at this point.

Rohingya refuse to return to Myanmar