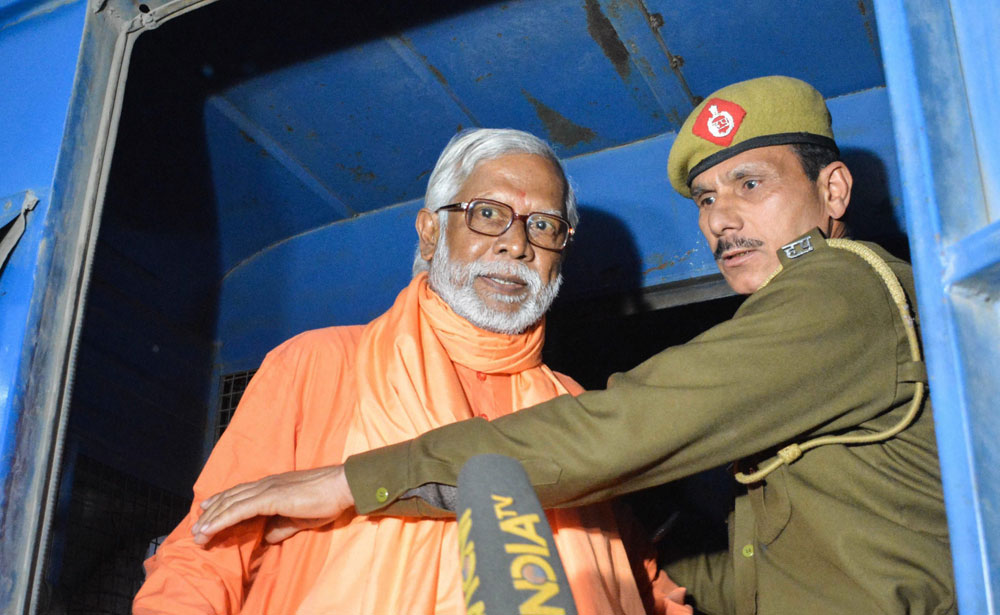 Swami Aseemanand after a special court acquitted him along with three others in the Samjhauta train blast case
PTI photo
Upala Sen   |   Published 24.03.19, 06:19 AM

Last week, Swami Aseemanand was acquitted in the Samjhauta blast case. The tragedy derives its name from the train link between India and Pakistan that was inaugurated in 1976. On the night of February 18, 2007, the Samjhauta Express set out from Old Delhi for Attari at 10.50pm. As it sped past Diwana, close to Panipat, someone raised alarm. The train was on fire. The UPA government was at the helm those days. The Union home secretary in Delhi was alerted four hours after the incident. Sixty-eight people were charred to death, most of them Pakistanis. On February 20, The Telegraph ran a report titled ‘Terror victims that BJP forgot’. It seems no senior BJP leader had cared to visit the victims or their families. Read the report: “L.K. Advani, usually the most serious about such visits, did not make the trip from his Prithviraj Road residence to Safdarjung Hospital, less than 5km away.”

He did it. He did not

In 2011, Aseemanand, born Naba Kumar Sarkar alias Jiten Chatterjee alias Omkarnath, was arrested by the Central Bureau of Investigation or CBI. He reportedly confessed to have planned not just the Samjhauta blast but also the terror attacks on Ajmer Sharif (2007), Mecca Masjid (2007), Malegaon (2006). That would work out to 2, 16 and 40 estimated deaths — in addition to Samjhauta’s 68. Don’t even try to calculate the collateral damage. Later, Aseemanand said he had been forced to say what he did under duress — and he was not referring to his torturing conscience. In a series of interviews to Caravan magazine in 2014, he said Rashtriya Swayamsevak Sangh chief Mohan Bhagwat had sanctioned these terrorist attacks, but he reneged on that claim too. In 2010, when the then Union home minister P. Chidambaram spoke of “saffron terrorism”, there was a furore. Saffron, after all, has associations with the godly and goodly in Hinduism and beyond, or so it was argued. Congress's Janardan Dwivedi also chimed in saying — “terrorism does not have any colour other than black”.

Aseemanand got bail in the Samjhauta case in 2014. BJP national general secretary Ram Madhav tweeted: “He is a free man now.” Aseemanand was acquitted in the Ajmer case in 2017. In 2018 came the Mecca Masjid acquittal. And now he has been cleared off Samjhauta. As for Malegaon, turns out he was not named an accused by the National Investigating Agency in the case. These many acquittals later, the man is sure to have sloughed off all taint, real and projected. At this rate, very soon he would have grown several pairs of wings in addition to a deepening halo, all of it might even make strong a case for a high berth on earth. That day in 2007, they only blew up a train named understanding.