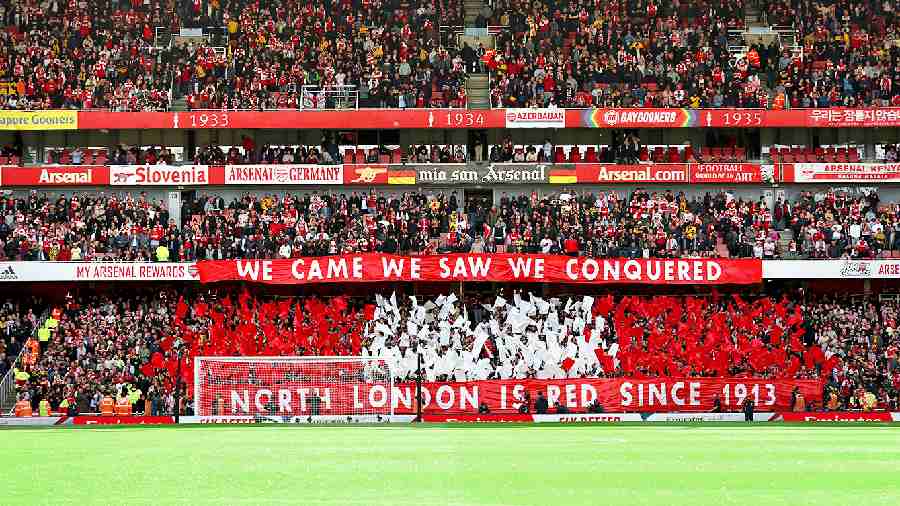 My son and his best friend rooted for Arsenal and I piggybacked on their enthusiasm because it was a name I remembered and I liked the thought of supporting a club called Arsenal managed by a man called Arsène.
Mukul Kesavan   |   Published 06.11.22, 03:14 AM

I’m an Arsenal supporter but I’m constantly ambushed by the fluid and footloose nature of club football. Arsenal is due to play Chelsea this weekend and I’m not sure how to deal with the prospect of Pierre-Emerick Aubameyang taking the field for Chelsea, given that he was Arsenal’s main striker till earlier this year. I know we’re meant to be blasé about the transfer market but I came late to football fandom and I find it hard to boo a player I once rooted for.

As a child in Delhi in the 1960s, I had no interest in league football. I had vaguely heard of Real Madrid, Bayern Munich and Borussia Mönchengladbach but they existed only as curious names. I (and most of my classmates) had no idea what the Bundesliga or La Liga was. The sports pages of Indian newspapers wasted no space on European football and in the total absence of televised coverage, there was no path to international football fandom.

There was, of course, Indian league football. I remember watching Leaders Club playing JCT Phagwara at the Corporation Stadium (now renamed Ambedkar Stadium), as their players hoofed the ball high from one end of the ground to the other, but the passion and skill of club football in India at the time were centred on Calcutta with its great triumvirate of clubs: Mohun Bagan, East Bengal and Mohammedan Sporting.

The main reason behind football’s low profile, even though it was played everywhere, in schools and maidans, was that on the international stage, India didn’t really figure. Our passion for cricket was fuelled by the fact that even though India’s Test team lost more often than it won, Indian teams took part in the top tier of cricket. Middle-class children found solace in the idea that the nation was, at least notionally, a contender.

The one European league that I was aware of was the English First Division and that was by a kind of accident. Every night at around 11 pm, the BBC World Service would put out a fifteen-minute bulletin called Sports Roundup. In the winter, my brother and I would tune in, hoping to catch angrez experts talking about a Test match that India might have been playing at the time.

We were invariably disappointed because winter bulletins were largely given over to league football. Nearly half the bulletin was taken up by the classified football results. I learnt the names of English football clubs by listening half-asleep to a droning chant: Ipswich Town 2, Nottingham Forest nil; Leeds United 1, Arsenal 2 and so on endlessly. I liked the sound of Arsenal more than the others because it was a single punchy word to do with guns but that was the extent of my interest in the game.

As a graduate student in England, I was appalled at the number of pages English newspapers gave up to football. Someone called Trevor Francis was bought for a million pounds by the aforementioned Nottingham Forest and that caused a stir for a while but the desis I knew associated football with skinheads and broken milk bottles every time a game came to town, so my disinterest persisted.

It was when Star Sports and ESPN began telecasting the Premier League live that I became a fully paid-up fan. A whole cohort of middle-class school children began to feel proprietary about English club teams because they could watch matches as they occurred and participate in that peculiar communion that live telecasts make possible. My son and his best friend rooted for Arsenal and I piggybacked on their enthusiasm because it was a name I remembered and I liked the thought of supporting a club called Arsenal managed by a man called Arsène.

When I watch Test cricket, my main sporting enthusiasm, I know, broadly speaking, what’s going on. I know the rules and even if I sometimes forget how reverse swing works, I can fake it with the best of them. Whereas I watch football in a state of near-perfect innocence. I think I know what the off-side rule is but its interpretation on the field eludes me. School football used to feature five forwards, three halves, two backs and a goalkeeper, though mostly everyone except the goalie galloped in the general direction of the ball. The formations of league football — 4-2-4 and 3-4-3 — so obvious to the pundits, are indiscernible to me once the players start running.

Like all fans, I long to be knowledgeable but the advantage of taking to a game in middle age is that you can live with ignorance. I can’t tell a False 9 from a centre-forward and I don’t care. Like all philistines, I know what I like. I like forwards who surge into the box and dribble a lot and leave defenders for dead. I detest teams that defend and defend and then score on the counter-attack. I loathe commentators who talk about robust tackles and carry on about football being a contact sport.

I can’t understand why fans are so exercised about their team qualifying for the Champions League. It’s a nice bonus, but surely winning the league is the thing that really counts. And I don’t think Erling Haaland, Manchester City’s centre-forward from Valhalla, should be allowed to play in the Premier League because football is a mortals-only sport. He mightn’t be a False 9 but he’s definitely an Alien 10.

The Aubameyang Conundrum, or how to reconcile your loyalty to the team with the knowledge that all its members are guns for hire, remains. What is it that drives fandom in league sport? From a marketing point of view, fans are the ultimate brand victims. But I suspect the real thrill of rooting for a club is the daft sense of community it creates.

Earlier this year, I found myself in a pub in north  London after an Arsenal win. Grown men and women (mostly men) were high-fiving strangers, shouting “North London is Red”, buying each other drinks and generally making a happy exhibition of themselves. It was utterly transient and the sweetest thing. We were, for a moment, equal citizens of a principality without a ruler. Ours was a state of perfect fellowship, a glimpse of Utopia.