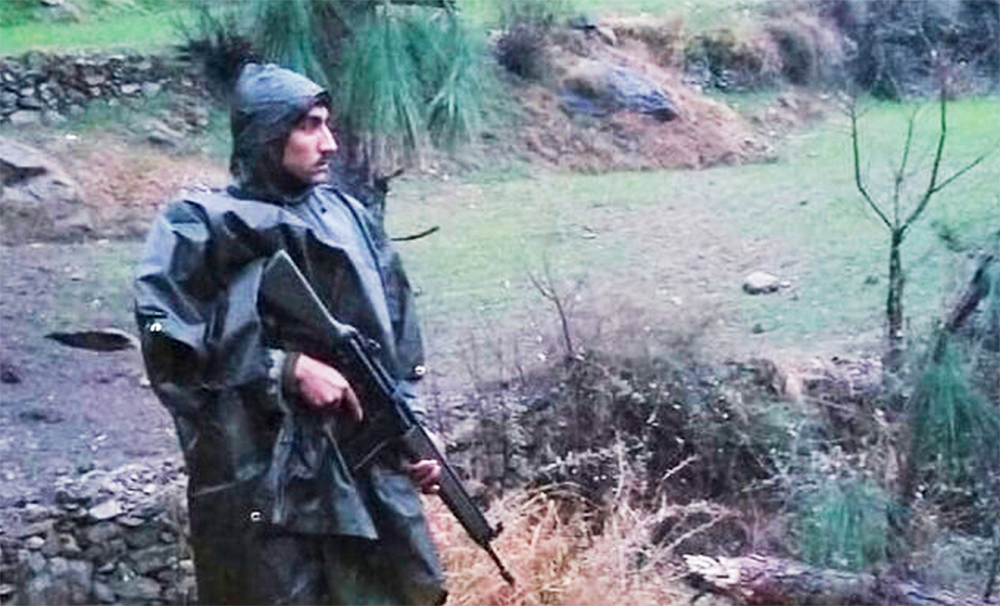 A Pakistani soldier stands guard after the Balakot air strike, on February 26, 2019. The accordance of centrality to the sovereignty of the people over every segment, including the armed forces, differentiates India from Pakistan
(AP file photo)
Prabhat Patnaik   |   Published 10.04.19, 03:44 AM

I propose to go back in this piece to the Indian air force’s strikes against the terrorist camps at Balakot in Pakistan some weeks ago. My concern here is not with the event itself but with an intellectual position that was advanced at the time which states that questioning the claims of the armed forces about the outcome of particular military operations is “anti-national”. This position is ominous and needs to be explicitly repudiated, which to my knowledge it has not been.

It may be recalled that this position was advanced at that time because contrary to the claims of the government, repeated by some Bharatiya Janata Party leaders, that the strikes had destroyed the terrorist camps around Balakot and killed nearly 300 terrorists, the evidence on the ground, according to many international agencies, actually showed very little damage having been inflicted. And when this was raised by Opposition spokesmen, they were accused by the government of disbelieving the armed forces and ipso facto committing an anti-national act. The remarkable thing, however, is that this intellectual position was not challenged by the Opposition parties. Their defence rather was that the information about the number of terrorists killed was given not by the armed forces themselves but by a bureaucrat who briefed the press and by BJP leaders trying to extract political mileage out of it. The view that doubting the word of the armed forces, if such word is given, amounts to an “anti-national” act, because we must have respect for these forces who risk their lives in defending “the nation”, appeared to command a consensus.

It is this view which is worrying, not because one has any lack of respect for the armed forces or denies that they are risking their lives in dangerous and difficult conditions, but because it amounts to an implicit denial of the fact that in a democracy like ours, it is the people who are supreme, and stand above every particular segment, no matter how noble and great the function it may be carrying out. Every segment in other words, including the armed forces, is accountable to the people, if not directly, then at least indirectly through their representatives. Consequently, no segment’s word can be taken as sacrosanct, no matter how much honour we choose to bestow upon that segment, without verification; for doing so would amount to a betrayal of the people, whose exercise of sovereignty demands that they must be told the truth.

In fact, it is this, namely the accordance of centrality to the sovereignty of the people over every segment including the armed forces, which differentiates India from Pakistan. The pre-eminent position of the armed forces in Pakistan’s social and political life, which has constricted democracy in that country, is captured in a joke that used to be popular there some years ago. It went as follows.

People were travelling in a bus in Pakistan which was extremely crowded. One person turned to his neighbour and asked: “Sir, are you in the army?” When the neighbour replied in the negative the person asked: “Is there anyone in your family in the army?” After another negative answer, he persisted: “Is there anyone from your village in the army?” And when the answer was still no, he yelled: “Then you scoundrel, take your foot off my toes which are getting squashed by it.”

The glorification of the armed forces and their elevation above the people by asserting that their actions are beyond scrutiny in principle (not having to do with specific security reasons at the time) is a denial of democracy. And when such an assertion is made in the name of “nationalism”, it only underscores how such a concept of “nationalism” is fundamentally anti-democratic.

Such a militaristic concept of “nationalism” is actually far-removed from the anti-colonial “nationalism” upon which the modern Indian “nation” with its emphasis on democracy and people’s sovereignty is founded. What is disturbing, however, is the manner in which the latter concept of “nationalism” is being gradually and surreptitiously substituted by the former as if the two are identical. The proposition advanced at the time of the Balakot strikes is a major instance of such substitution, which at the same time is a denigration of the concept of the people’s sovereignty.

The BJP of course has been an advocate of such a muscular militaristic nationalism which is fundamentally anti-democratic; but the fact that its concepts can get such easy currency points to a deeper problem, namely a basic disrespect for the “people” among a significant section of the elite in our stratified, caste-based society. For instance, while there is general appreciation for the role of the armed forces because of the dangers they face in the cause of the “nation”, there is hardly any comparable appreciation of the role of the sewage-workers who face dangers no less than those of the armed forces, also in the service of the “nation”. And would anyone ever argue that the word of the sewage-workers should never be questioned because of the hazards of their occupation in the service of the “nation”?

From the view that the word of the armed forces must be accepted and questioning it is “anti-national” it is only a short step to say that the word of the government must be accepted and criticizing it is “anti-national”: both positions treat the people not as subjects within a democratic framework but as objects who have to be lulled into quietude for their own good, so that they do not get afflicted by demoralization. Emphasizing the growing unemployment and poverty in the economy, claiming that the high gross domestic product growth rates mean very little as they camouflage increasing distress within the working population, can then be said to be demoralizing for the “nation” and hence “anti-national”.

This is not idle fancy: such views about the demoralizing effects of criticism were expressed during the United Progressive Alliance period by persons in high authority. What the BJP has done in treating criticisms of the government as being synonymous with “sedition” or “anti-nationalism” is simply to carry this position to its absurd logical limit. But this limit is of a process where there is an inverted perception of the people, not as subjects but as objects, where the people, instead of being treated as sovereign, are treated with paternalistic condescension, who must show due deference to the armed forces ‘that are doing so much for them’ and to the government that ‘is so concerned for their welfare’. Such an inversion in perception comes easy in our hierarchical caste-based society that has anyway been fundamentally anti-egalitarian for millennia.