As Ulysses lives on, what can we learn? 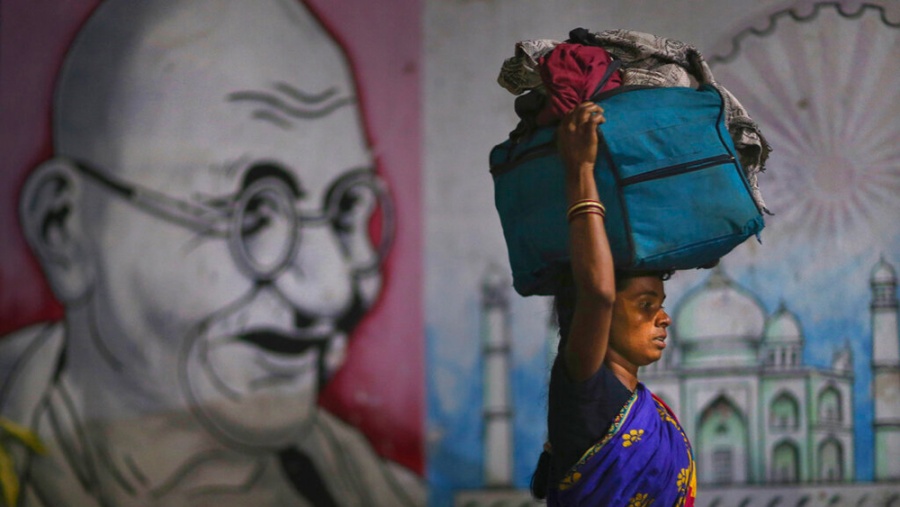 Without money or shelter, much like Joyce’s men on the street, migrant workers trudged hundreds of kilometres towards their rural homes.
AP file photo
Farzana Quader   |     |   Published 16.07.20, 01:03 AM

When Leopold Bloom, the Jewish protagonist of James Joyce’s Ulysses, is asked if he knew what a nation means: “A nation?” says Bloom, “A nation is the same people living in the same place.” There rains on him ridicule, mockery and blows in a violent outburst of anti-Semitic feelings by the ‘Citizen’ and his compatriots. And the secular Jew in Bloom concludes: “It’s a patent absurdity on the face of it to hate people because they live round the corner and speak another vernacular, so to speak.”

Drawing from the above quote, it might be interesting to dwell on the following question: does Ulysses carry shades of Joyce’s own rejection of the glorified nationalist idealism based on the valorization of a golden past? In Joyce’s perspective, this resulted in overt Irishism, sectarian violence, and hate against his Jewish protagonist. Patriotic Ireland had turned anti-Semitic. There was an economic boycott against the small Jewish community in Limerick, Ireland, for over two years in the first decade of the 20th century. It was accompanied by assaults, stone throwing and intimidation, which caused many Jews to leave the city. These incidents were instigated by a priest, Father John Creagh. Strangely, even Arthur Griffith, the founder of the Irish political party, Sinn Féin, and the defender of Home Rule for Ireland, had supported Creagh, issuing a warning on the front page of the United Irishman: “The Jew in Ireland is in every respect an economic evil. He produces no wealth himself—he draws it from others—he is the most successful seller of foreign goods, he is an unfair competitor with the ratepaying Irish shopkeeper, and he remains among us ever and always an alien.”

Does Creagh’s Ireland invite a parallel with an India suffering from the spectre of Hindutva? Does Joyce’s stance in Ulysses bear out a comparison with the escapism of Narendra Modi’s India from a deepening agrarian crisis, economic decline and the moral vacuum reflected by a eulogized Vedic past? Is the Citizen’s rage against the Jew representative of the hatred professed by the bhakt for the Muslim?

Ulysses’s plot is woven with classical precision, around the events of a single day — June 16, 1904, in Dublin. While Ireland was throbbing with nationalistic feelings, Joyce, as is known, had disassociated himself from this patriotic fervour. The Gaelic League, the Gaelic Athletic Association, the Cumann na nGaedheal or Confederation of the Gaels represented the different associations through which the Irish began to assert their national heritage in the late 19th and early 20th centuries. The literary revival glorified a golden past. But all this was scoffed at by Joyce: “Ancient Ireland is dead just as ancient Egypt is dead.”

In Ulysses, the ordinary man is visible everywhere: a wretched drunken hag, with no redemption in sight in a nationalistic Ireland. To the man on the street, Ireland, drained by its two imperial masters — the Church and Britain — is a sink. By his omission of the grandiose, by limiting himself to the putrid scatological details of life in Dublin, Joyce rejects this rampant nationalism.

Almost a century later, in Modi’s India, we are witnessing our country facing one of the worst economic declines in recent years. As the pandemic announced itself and a lockdown was imposed by the prime minister within a span of four hours, lakhs of migrant workers were turned out by their house owners and employers. Without money or shelter, much like Joyce’s men on the street, they trudged hundreds of kilometres towards their rural homes. Other segments of the working population are suffering job losses or salary cuts — in the hospitality industry, in textiles, tailoring, tea factories and so on. The pandemic was preceded by a terrible spate of farmers’ suicides and riots in which Muslims in Northeast Delhi suffered disproportionately. Today, China is flexing its muscles, defying territorial borders. Yet, India’s media continue to project rosy images of a nationalistic revival, of economic greatness, and of military glory. Sadly, Joyce is no longer alive to object to this “old pap of racial hatred” or speak for our workmen, our peasants, “the other” — the oppressed Muslim, Christian or Dalit.

However, Ulysses lives on; we need to take some lessons from it.

Can the Indian economy bounce back from the ‘historic low’?