An unacceptable violation of rights 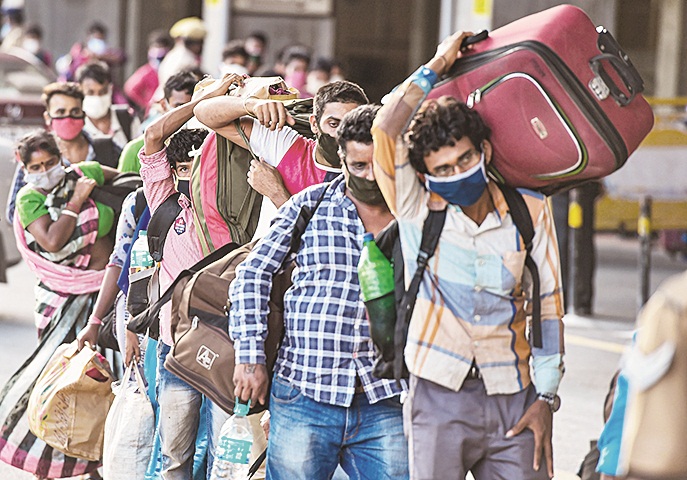 The issue has nothing to do with one being Left, Right or Centre. In fact, looking at it in these terms is itself a distraction; it is a simple matter of legality. Whenever the State takes away anyone’s property, then, by the laws of our land, that person is entitled to compensation. Likewise, whenever State action deprives anyone of an income that he or she was otherwise earning, then, by the same logic, that person should be legally entitled to compensation from the State.

When Narendra Modi announced a nationwide lockdown on March 24 because of the coronavirus crisis, that action took away by the stroke of a pen the incomes of innumerable workers, including an estimated 14 crore migrant workers, of whom about 10 crore were inter-state migrants. But there was no compensation announced, and till today no compensation has been either paid or is in the offing.

In the beginning, the government had asked the enterprises, where the workers were employed, to pay them wages during the lockdown; but the Supreme Court struck this order down. When it did so, no matter what one thought of the Supreme Court’s wisdom, the government should have automatically taken the responsibility of paying them compensation. But nothing was done. The Central government wanted the state governments to pay them some amount (despite having starved the latter of funds, including the GST compensation that was their legitimate due); but who is to pay should have been settled before the lockdown was announced. Compensation simply cannot be denied to the workers because of squabbles over who is to pay.

What we are witnessing today is thus the most unimaginable, the most horrendous, infringement of the basic rights of workers who have been turned overnight from being citizens of the country with basic rights to mere mendicants. The contrast with other countries, indeed true-blue capitalist countries, could not have been sharper. In all advanced capitalist countries, the task of paying wages to workers during the lockdown, even to workers employed in the private sector, was taken over by the government that announced the lockdown.

So large was the scale of such payment that the Financial Times, London, commented editorially on May 8, incidentally in defence of such payments, as follows: “Short of a communist revolution, it is hard to imagine how governments could have intervened in private markets — for labour, for credit, for the exchange of goods and services — as quickly and deeply as in the past two months of lockdowns. Overnight, millions of private sector employees have been getting their pay cheques from public budgets and central banks have flooded financial markets with electronic money.”

This payment is not based on compassion or humanity or any such lofty sentiment; it is simply a recognition of the rights of individuals within a capitalist democracy. The contrast with India only shows that the poor in this country have no de facto rights, irrespective of what the Constitution promises.

This attitude of not recognizing the rights of the poor permeates large segments of the middle class and the elite. Even the Supreme Court, the custodian of the people’s rights, is not untouched by it: while striking down the government order that workers should be paid wages by their employers during the lockdown, it asked the question: ‘how can employers be asked to pay wages when the enterprises are shut?’ But it did not ask the question that should have immediately followed: ‘how can workers go without wages when enterprises are made to shut?’ Had it done so, it would have reached the conclusion that it was the government which had to pay them wages. It would have directed the government to do so, and thereby upheld the workers’ rights. Instead it chose to put the burden of the income loss on the shoulders precisely of those least able to bear it, which is typical of a feudal order but not of a democracy with universal rights and equality before law.

The obfuscation practiced by the Central government has successfully relegated this question of rights to the background, while the debate has shifted to the nature of the ‘stimulus package’ announced by the finance minister. That package, as is well-known, contained a slew of measures making credit available to various groups for stimulating the economy; it contained little by way of any fiscal transfers. Many have argued, rightly in my view, that since the economy is ‘demand-constrained’ at present, simply making credit available without using government expenditure as a means of expanding demand would mean that even the credit offers would go a-begging, that the government’s package would expand neither demand nor credit, nor output nor employment (beyond some limited bounce-back from the depths they had reached during the lockdown).

But this discussion, valuable though it is, has nothing to do with the question of the workers’ right to compensation. Even if the finance minister is right in believing that the economy at present is not demand-constrained but credit-constrained, and that the package she has provided is the right one for stimulating the economy, she cannot get away by not paying compensation to the workers who were rendered income-less for no fault of theirs and entirely because the Central government decreed a lockdown. The whole question of what is correct for the economy has to be separated from the question of the rights of the workers, even when many, including myself, believe that paying compensation to the workers for their lost wages is also the right means of stimulating the economy.

The fact that we are witnessing a massive humanitarian crisis, unprecedented in our entire post-Independence history, and reminiscent only of the days of the Partition or of the 1943 Bengal famine, can hardly be denied. But while focusing on the human tragedy of lakhs of migrant workers trudging home in the unbearable summer heat of North India, or going without food and water when herded into hastily-arranged trains (where a move was even afoot to make them pay for their fares), we must not lose sight of the violation of their basic rights. Unless they are compensated for this violation, a precedent would be set for reducing them to the status of second-class citizens forever.

Many economists and political parties have been demanding a payment of Rs 7,000 per household to all households (except those who may voluntarily drop out) for a period of at least three months, apart from free food of 10 kilogrammes per head for a period of six months. While the Central government has taken some steps to implement the latter, it has done nothing towards implementing the former. The point, however, is that such demands should not be seen as addressing only our sense of compassion. They should be seen above all as respecting the rights of all those who lost their incomes during the lockdown announced by the government.

The government in short may decide to give people a different bundle from what the economists and others have proposed; but it cannot say no to a compensation package. To do otherwise would be an open and blatant infringement of citizens’ rights that is simply unacceptable in any democracy.